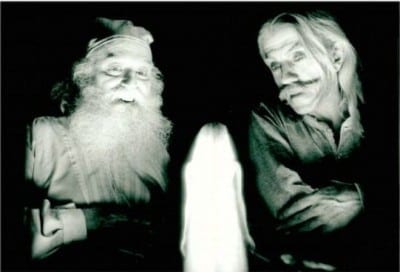 The introduction of sound to film in the late 1920s created a before-and-after line in cinematic history, relegating silent films to a remote past. But several current and upcoming events in Atlanta suggest the wide range of silent filmmaking, its continued relevance to cinema, and its creative use in our time.

The High Museum of Art’s “Picasso to Warhol” exhibit includes a number of artists’ films as looping projections among the paintings and sculptures. Marcel Duchamp’s “Anémic Cinéma” (note the anagrammatic title) was made in 1926. Duchamp had made a series of “Rotoreliefs,” flat colored discs with spiral patterns that create optical illusions when rotated on a turntable. Anémic Cinéma consists of the depiction of these discs in motion. These alternate with a different series of discs, also rotating, with pun-laden texts written in a spiral. The texts are in French and the puns translate only partially. But even non-speakers of French will discern a deft use of alliteration and transposed consonants between words, even as all the film’s viewers will struggle to read a text that is spiraling rather than presented in a linear fashion (as with most title cards from the silent era).

This skewed relation to cinematic convention points out how, in Dalia Judovitz’s words, Duchamp’s only film “refused to rely on the visual presuppositions and conventions of the cinematic medium.” Indeed, “Anémic Cinéma” is striking for just this indifference toward cinematic qualities. The whirling spirals look like a documentation of motion rather than a “motion picture.” Rather than taking advantage of photography’s natural depth of field, the film’s presentation of depth is plainly illusory. As the title suggests, the film is deliberately drained of the literary meanings and photographic representations that had already come to define cinema in the silent era.

Also showing in “Picasso to Warhol” is “Ballet mécanique,” Fernand Léger’s and Dudley Murphy’s 1924 tour de force of rhythm and motion. The film is projected alongside a selection of Léger’s paintings, including the large-scale “Three Women” (1921-22). This relation makes plain Léger’s fascination with the human body as machine. Mannequin legs are edited to suggest a dance, recalling the fragmentation of body parts in Léger’s paintings. These are juxtaposed with industrial machinery in action. Balls and prisms whirl; pistons thrust; eyes move in their sockets; a woman’s head rotates, and in closeup, her lips form a smile. We see a repeated shot of a woman carrying a bag of laundry up stairs. The only life she has on the screen is to repeat this action over and over, the same way every time. This is not theme and variation but rather pure repetition: the body as machine, a machine exalted by the mechanics of the camera, the editor and the film projector.

Andy Warhol famously stated that he wanted to be a machine, and repetition was his way of achieving this. Warhol’s “Screen Test” films were made from late 1964 to mid-1966 and number in the hundreds. Visitors to Warhol’s “Factory” were asked to sit for a three-minute portrait (the length of time it generally took to run a 100-foot roll of film through Warhol’s Bolex camera). Often, Warhol asked the subject to remain motionless while staring into the camera lens. Of course, few of the subjects in these portraits remain completely still. They squirm or squint against the bright light, or clown, or even get up and leave.

Though Warhol filmed all kinds of visitors, including people completely unknown to us today, the 15 “Screen Tests” chosen for the High exhibition tend toward famous or glamorous subjects — Salvador Dalí, Bob Dylan, Duchamp, Nico, Dennis Hopper, Allen Ginsberg and Susan Sontag among them. The selection highlights the common view of Warhol as fascinated by fame, but it also reveals the variety of the subjects’ responses to being filmed. Sontag tries various exaggerated poses, while Ginsberg remains motionless, every bit the serious poet. Hopper can’t seem to resist method acting, while Dalí plays Dalí. Like Warhol’s soup cans, the “Screen Tests” are a continuous repetition of the same idea, marked by mechanical reproduction. But unlike Léger’s mechanical ballet, the repetitions reveal the human as much as the machine.

In their silence, their single-shot takes and their stationary camera, the “Screen Tests” recall very early cinema. Also reaching back to the silent era — and to early cinema equipment — is Atlanta filmmaker Milford Thomas, whose modern-day silent film “Claire” will be shown in a 10th-anniversary screening at the Woodruff Arts Center’s Rich Theatre on November 3. (Tickets available at the box office.)

“Claire” is based on a Japanese folk tale in which a “princess of the moon” appears to a childless couple. Thomas adapted the tale, changing the couple to two gay men living in the rural South. (They are portrayed by Jim Ferguson and Mish P. DeLight, both of whom are associated with the group known as the Radical Faeries and the Short Mountain commune in Tennessee.)

Though Thomas doesn’t see “Claire” as making a specific political statement, he does seek to “claim a myth” for gay people with the film. Much in the way the Radical Faeries pioneered alternative rural locales and identities for gay men beginning in the 1970s, Thomas recasts an old fairy tale for a new time and a different place, and inscribes an alternative model for the family within the framework of early cinema. Remarkably, he achieves this through the reanimation of early cinema technology — specifically, an antique 35mm Mitchell film camera. Using this camera, which in the style of the 1910s is hand-cranked rather than motorized, he created a film that is true to the aesthetic of the silent era.

The anniversary screening of “Claire,” occurring almost 10 years to the day from the premiere, gathers an 11-piece ensemble for a rare live performance of the film’s score. It’s also a reunion: composer Anne Richardson will come to Atlanta to conduct the ensemble, and in attendance will be the film’s two lead actors and members of the crew.

The area of music and the silent film is a vast field of research and practice that continues to this day. Just in time for Halloween, Possible Futures will screen F.W. Murnau’s classic take on the Dracula legend, “Nosferatu,” at the Goat Farm on October 27 and 28, featuring the live performance of a score by musician and artist Felipe Barral.

Barral is a guitarist who trained classically, then switched to electric guitar. His “Nosferatu” score, composed over the course of what he says were hundreds of viewings of the film, is based on the electric guitar, tuned to a nonstandard system developed by Robert Fripp of 1970s progressive rock band King Crimson. (In this system, the range of notes is widened so that both the low strings and high strings are at greater extremes. This allows for the bottom end of the guitar to produce what Barral approvingly calls a “roar,” while the higher strings correspondingly produce sounds outside the normal expected range.) Barral calls the style of his score a mixture of classical, rock and experimental, citing Dead Can Dance as a particular inspiration. Like that group, Barral mixes very old music with very new. “The idea is to honor the film, giving it a modern twist,” he says.

Barral’s score was composed in 1999, and he has toured with “Nosferatu,” performing live at film festivals in South America. For the Atlanta performance, he has expanded the live ensemble to include a singer, whose voice he uses not for the singing of lyrics or text but purely as a musical instrument. “I directed the singer to feel the movie,” he says.