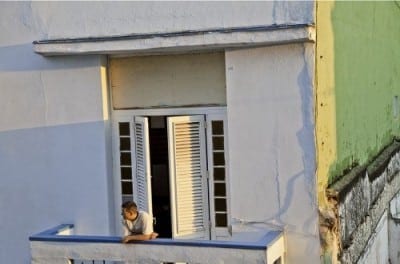 Cuba is so exquisitely atmospheric — and so veiled in the allure of the forbidden — that many who go are misled into thinking they can take artful photos there. After all, every image of the place seems to carry a tingling extra valence, like the little shock you get when you brush against threadbare wiring. In the facade of the elegant villa: all the paint has flaked away and the cornice fallen. In the beauty of the nubile girl (or boy): desirability, desire, and the locally well-known survival option of prostitution with foreign tourists. Even from 36,000 feet on a jet crossing the island en route to the sanitized resorts of Grand Cayman or the funky bustle of Montego Bay, the view of Cuba is a paradox of improbability.

This island still possesses thousands of intricately convoluted miles of pristine shoreline, as if the beachfront mass tourism that now fuels the Caribbean has never occurred. For those Americans who have had the delicious and troubling luck to go there, Cuba feels like a non-stop photo opportunity. It’s exhausting, really; everywhere you look there’s a picture you feel compelled to take. At least I found it exhausting, not being a photographer, because I couldn’t stop myself from snapping hundreds of shots. You’ve seen my pictures, or ones much like them: the old cars, the costumed dancers, the spirited musicians, the crumbling buildings, the riotous vegetation, the empty shops, the old men playing dominoes, the old women smoking cigars, the improvised everything, the streets full of people simultaneously listless and animated, exhausted yet vivacious. In the United States, we know Cuba almost exclusively from colorfully, beautifully, darkly evocative images like these.

My personal favorite iconic photo of Cuba — it’s a generic, not specific, image — is the one I call “The Watcher.” It depicts a solitary figure leaning over a balcony and gazing down at whatever may be going on outside the frame, or focusing perhaps on nothing. For me this image conveys just about all you need to know, including a lot of what the Cuban government would dislike your seeing: the languid boredom of having nothing to do but wait for change, the urge to step outdoors because inside is airless and cramped, the hammering maritime tropical sunlight, the humid mildewed blasted dilapidation. On several trips I’ve made to Cuba as a magazine writer, despite not being a photographer, I’ve felt compelled to photograph “The Watcher” dozens of times.

Lucinda Bunnen shot him, too. Her picture (above) says everything I’ve just described. But I don’t see it as photojournalism. It is as much about texture and color, light and shadow, line and form, angle and plane as it is a representation or narrative or polemic. From the beginning of her career, Bunnen has sometimes explored non-representational imagery and even obfuscatory technique. But her wide-ranging oeuvre — quite apart from her work as a philanthropist — amply demonstrates her generous humanism and progressive political sensibilities. She likes people, and she has a big heart.

There are certainly a few images in “Cuba,” the exhibition of Bunnen’s photographs at Sandler Hudson Gallery through November 26, that resemble those literal, poignant, familiar views of Cuba. And maybe two or three of these pictures really are just documentary — for example, the view into the shabby atrium of the once-palatial townhouse built for a single plutocratic family but now housing many. Maybe Bunnen can’t entirely help herself, can’t totally get past her empathic social consciousness or her itch to tell a story.

But mostly these new photographs are abstractions. The ones showing people aren’t so much portraits as investigations into angle and color. That jumble of tiled rooftops is less about crowded conditions than about fractured pattern. In place of the typical charming shots of vintage American automobiles, she took a close-up of the grille of one (at left), to contemplate bulge and distortion and repetition, and a shot of one’s interior, to consider its juxtapositions of bright red and bright blue, hard metal and soft vinyl. That last one, with its terrible battered floor and bagged-out seat, does make a statement about hobbling longevity. And here’s a travel tip just in case you ever go to Cuba: up close, those vintage cars aren’t charming. Many of their original engines have been replaced with clattering, fume-spewing diesels. Their patched-together survival says something important about the Cuban people’s response to adversity. But you don’t really want to ride in them. I was once in a 1952 Cadillac taxicab with a taped-together windshield when, going around a corner, the door next to me flew wide open and I nearly fell out.

Bunnen’s photos of Cuba, in their strong impulse toward abstraction, are natural successors to her recent images of a possibly mythical place called Hatcher’s Pond. Enchanted by the irresistible reflective serenity of those pictures, I asked her where this Hatcher’s Pond is located, and she replied, “I could tell you, but then I’d have to kill you.” It’s not too far-fetched to make the mistake, at least upon first viewing that series, that it’s all a trick and the pictures were drawn or etched, not captured from nature. But they really are just photographs of reeds and flotsam in water.

Are her abstractions of Cuba about anything besides their imagistic qualities? No. Or yes. Or maybe. Among the most nonrepresentational are those that look like nothing more than grainy black-and-white texture. They’re gorgeous photographs, in their multiple strata and nebulous depth. I imagine hanging them in my living room and gazing into them for hours. They were shot inside a 17th-century fort; in fact, they show the walls of cells that held prisoners and slaves. (This is now a tourist site; I don’t believe that visiting foreigners get to see Cuba’s current prisons.)

Was Bunnen moved more by the visual richness of those marks and abrasions or by their awful history? “I was searching for clues,” she told me about those pictures — which doesn’t exactly answer the question, which it hadn’t yet occurred to me to ask. They’re heavy with the layered, scratchy, battering tragedies of the country itself. I wonder if I could look past that. I don’t think Lucinda would try

(See also “Selected Works by Lucinda Bunnen,” at the Jacqueline Casey Hudgens Center for the Arts through November 19.)

Thanks to Fall Line Press and Jonathan Lerner for permission to publish this essay, which originally appeared in Fall Line’s premier issue of “Fall Out,” an occasional catalog of exhibitions by important artists. Copies of the signed, limited-edition catalog are available at Sandler Hudson Gallery or from Fall Line Press.