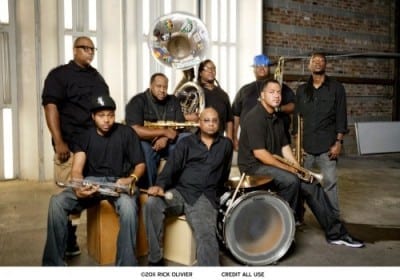 Three snapshots from Saturday’s “A Night in Treme” concert at the Rialto Center for the Arts:

The season opener for GSU’s Rialto was a big, joyous party set to a soundtrack of New Orleans music. The music, heard weekly on the HBO series “Treme” — part of a U.S. tour — came from the hip-hop-tinged swamp funk of the Soul Rebels, the rabble-rouser Andrews and, with a more historical but no less jubilant approach, saxophonist Donald Harrison Jr. and trumpeter Kermit Ruffins.

In February, Georgia State will continue its national jazz offerings with pianist McCoy Tyner. In April, there will be a performance by trumpeter Dave Douglas and a double bill of Poncho Sanchez and Terrance Blanchard. Elsewhere in the metro area, trumpeter Sean Jones will start the jazz season at Spivey Hall with an appearance November 19. Spivey also will feature saxophonist Branford Marsalis with pianist Joey Calderazzo on January 21 — the one must-see jazz show of the year — and the Freddy Cole Quartet in February. The sole jazz show at Emory University this season will take place during its annual jazz festival in February, when hotshot singer Sachal Vasandani will perform.

But back to “Treme.” Atlantans packed the house for the Rialto’s first jazz event of the season. It was hard to judge how many people were there, as by the end of the third song, audience members were out of their seats and dancing in the aisles. The night highlighted a contemporary New Orleans sound — a brass band paired with shouted vocals and a bit of rapping — but also included historical approaches. Ruffins, playing Louis Armstrong-style trumpet licks and singing, unveiled the only ballad of the evening, a stirring reading of “What a Wonderful World.” His trumpet playing, replete with smears and growls, presented a nice contrast to the party atmosphere.

Saxophonist Harrison brought some jazz standards to the mix, giving “A Night in Tunisia” a funky, syncopated accompaniment. His alto sound, incongruous in the middle of the Soul Rebels’ forte-forte-forte playing style, was sweet and subtle, but he burned through his allotted solo, with notes churning and bubbling through his horn; at the end of it all, his unaccompanied cadenza silenced the loud, party-ready crowd. Harrison’s solo, during a night of unabashed, let-your-hair-down revelry, was one of the most riveting musical moments I’ve experienced in three seasons of going to jazz shows at the Rialto.

A week before the Rialto event, the Ferst Center for the Arts’ first jazz offering, of Paquito D’Rivera and the Brasil Guitar Duo, was a completely different scene. This was the most straight-ahead jazz event at Georgia Tech this season, but smooth-jazz lovers can look forward to performances by Earl Klugh, David Benoit, Take 6 and Sophie Milman.

At Georgia Tech, just before a very polite intermission — you’d never have been able to break up the Rialto party with an intermission! — D’Rivera, clarinet to his lips, slowly paced the stage, moving thorough a series of improvisations based on themes by his one-time boss, Dizzy Gillespie. The hook for “Salt Peanuts,” complete with stomp and chant, emerged, then snippets of “A Night in Tunisia” and “Manteca” flowed from his horn. After stating the melody, he added trilled filigree and blithely bounded up and down his instrument. He would come back to the melody and short fragments based on these themes again and again, seeming to keep the audience’s expectations in mind.

This was D’Rivera as advertised, the man who rose to prominence with the Grammy-winning Cuban band Irakere and then defected from his homeland at age 30 to eventually become a fixture in Gillespie’s big band. Now 63, he’s lately been focusing on Brazilian classical composers, but for a few moments he was in his jazz element.

As a unit, D’Rivera and the Brasil Duo — Joao Luiz and Douglas Lora — were hit and miss, and the classical tunes during the second half of the concert seemed to meld better than the ensemble’s initial offerings of Baroque-tinged music. Think Bach with a Brazilian accent. By the encore, one of D’Rivera’s old jazz standbys, “Tico, Tico,” the group was performing like a well-practiced ensemble. The concert presented Paquito D’Rivera as he is now: clarinet in hand, dedicated to classical Brazilian composers, but always ready to pay homage to his American jazz heritage.

Within the span of a week, programmers at the Ferst and the Rialto presented two very different ideas of jazz. While the rest of the university jazz season doesn’t really heat up until January, it’s nice to know that those in power are dedicated to bringing a wide range of improvised music to Atlanta.