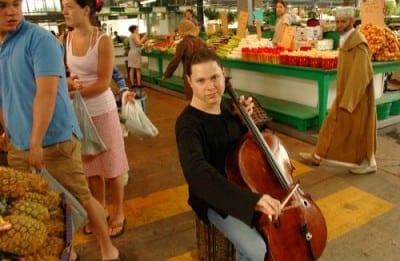 Cellist Matt Haimovitz has either slipped off the grid of the classical music business or is defining its vibrant future. Perhaps both. He returns to Atlanta next week, offering music for solo cello that he calls “a human conversation with divine beauty.”

The Israeli-born, American-raised Haimovitz has come a long way since his Atlanta debut a quarter-century ago. As a kid, all of age 15, he played the Fox Theatre as soloist with Zubin Mehta and the Israel Philharmonic, a last-minute replacement for legendary pianist Claudio Arrau during the orchestra’s 1986 U.S. tour. Two years later, Haimovitz had snagged a recording contract with the then-prestigious Deutsche Grammophon label. An observer would have predicated a conventional soloist’s career for the prodigal cellist. But with the collapse of the record industry, among other cultural shifts, the “conventional” part was not to be.

In 1996, with both the termination of his DG contract and graduation from Harvard, a disenchanted Haimovitz was ready to buck the system — ready to dispense with both the traditional classical career and its limited standard repertoire. He struck out on a new path, offering energized performances of classical music on unaccompanied cello at venues that had been the demesne of folk music and alternative rock.

That’s how he landed his next two gigs in Atlanta, in 2003, at Eddie’s Attic, the acoustic-folk “listening room.” For the first he performed Bach’s cello suites to a packed house; for the second he brought an evening of music by American composers.

Now at the ripe age of 40, Haimovitz is returning to perform on two consecutive days at Emory University, and in neither case will it be in a standard concert hall. He’ll play on Wednesday, November 2, in the Commons at the Emory School of Medicine, and on Thursday, November 3, at the Marcus Hillel Center. Both concerts are free. Each begins at 6 p.m. For more information, click here.

On Wednesday, at the medical school, Haimovitz will open with Domenico Gabrielli’s Ricercar No. 5 and the Prelude from Bach’s Suite No. 3, followed by “After Reading Shakespeare,” a 1980 suite for cello by American composer Ned Rorem, which evokes characters from the Bard’s plays and snippets from his sonnets. Haimovitz will conclude the brief recital with one of his staples: his transcription for cello of Jimi Hendrix’s Woodstock rendition of “The Star-Spangled Banner.”

The next day, at the Marcus Hillel Center, Haimovitz will share the stage in a “Creativity Conversation” with Emory music department Chairman Kevin Karnes and professor of Judaic studies David Blumenthal. In addition to his performance, the cellist will discuss the music’s extramusical themes.

“For Hillel, I put together a program that embraces spirituality,” says Haimovitz, adding that it will open in that tenor with the meditative Allemande from Bach’s Suite No. 3. “I see it as a prayer, a human conversation with divine beauty.” Of special note for the Hillel Center’s mission are works by two Jewish composers: Robert Stern’s “Recitative” (“Yom Teruah”), written for Haimovitz in 2001, and George Perle’s “Hebrew Melodies,” from 1945. Both works explore elements of Jewish cantorial traditions.

“Cèdres en Voile (Threnody for Lebanon),” by Canadian composer Gilles Tremblay, hints at cantorial practice and evokes the maqam, the system of melodic modes used in Arabic music, all the while basing the expressions on a Christian hymn tune, a fact not revealed clearly in the music until the end, in an attempt to unite three religions in a lament over the violent recent history of Lebanon.

Haimovitz will conclude with a piece he commissioned in 2001 from African-American composer David Sanford, “7th Avenue Kaddish.” The work “responds to the tragedy of September 11,” the cellist offers, “inspired by the transcendent spirituality of John Coltrane’s form in ‘A Love Supreme.’ Sanford imagines the cellist, a hybrid between a saxophone and a cantor, continuing to play as the buildings of the World Trade Center collapse, because that is all he can do. It reminds me of the Leonard Bernstein quote, ‘This will be our reply to violence: to make music more intensely, more beautifully, more devotedly than ever before.’ ”