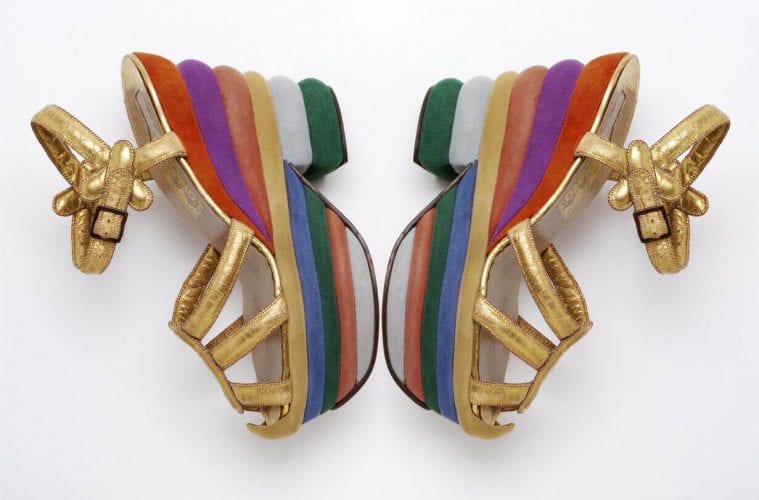 “Shoes: Pleasure and Pain” offers a history lesson of humanity — as told by our footwear

“What spirit is so empty and blind, that it cannot recognize the fact that the foot is more noble than the shoe, and skin more beautiful than the garment with which it is clothed?” —Michelangelo

Michelangelo’s consternation over humankind’s inclination to gild the lily was perfectly rational. But if there has been a silver lining to the dull sensibilities that propel us to tamper with perfection, it would have to be the breadth and depth of our shoe game.

The exhibition was organized by London’s Victoria and Albert Museum and curated by Helen Persson, a specialist in Chinese textiles and dress.

“Throughout the centuries and across cultures, footwear has symbolized high social status,” says Persson. “The design of shoes has created many identifiable symbols of supremacy and privilege, from the red heels of the French King Louis XIV’s court to the red soles of Christian Louboutin today, to show that the wearer belongs to an exclusive circle.”

Three centuries after the Sun King’s entourage enjoyed apparent power by taking style cues from their monarch, status-conscious consumers today are apt to follow in the footsteps of models and actresses — allowing the wearer to “live the dream of a glamorous, extravagant lifestyle, or at least pretend for an evening,” according to Persson.

From Manolo Blahnik’s “Campari” Mary Jane pointy toe pumps, the urban shoe myth that set Carrie Bradshaw’s heart aflutter in Sex & the City, to Vivienne Westwood’s blue platforms, made infamous after Naomi Campbell fell from their spectacular height on a catwalk, Shoes: Pleasure and Pain offers close encounters with everything from the sublime to the ludicrous.

The show is grouped around five themes: “Transformation,” “Status,” “Seduction,” “Creation” and “Obsession.” Historic fashion illustrations, designers’ sketches and shoemaking materials will help visitors gain a deeper understanding of the exhibition’s themes. An interactive tactile display called “Touching the Sole” will allow visually impaired guests to engage with replicas of many of the shoes on display. And SCAD FASH’s Film Salon will feature Vivienne Westwood: Dress Up Story, a film that was commissioned by the college in 2015.

Ancient Egyptian slippers embellished with gold leaf; a pair of botas tribaleras, a highly stylized cowboy boot from Mexico with toes that are so elongated the wearer must hold the tips to keep from tripping over them; and Zaha Hadid’s cutting-edge “Nova” cantilevered heels span nearly two millennia of shoe design. Pair of chopines, punched leather and pine, circa 1600, Italy. (Courtesy of Victoria and Albert Museum, London.)

For all the ingenuity and whimsy on display, there is no escaping the impracticality of an accessory created to protect the feet that rarely follows human anatomy and frequently distorts the foot.

“What I discovered is that form and material has almost always preceded function for shoes,” says Persson. “Even shoes that claim to be ergonomic usually have rounded or square toes — not reflecting the actual, angled arrangement of the toes and further emphasizing that the aesthetically pleasing has nothing to do with the practical and functional. Comfortable and practical shoes (also called ugly shoes) seem generally in all cultures to connote working class, poor and old people who no longer are ‘in the game.’”

Rafael Gomes, SCAD’s director of fashion exhibitions, says that even the sound of a shoe can offer aural clues about the wearer, sight unseen. “Just think of the tick-tick-tick of high heels or the slap of a flip-flop, and the very different mental images they conjure in your mind,” he says. To emphasize the point, he takes an 18th-century sabot, a whole foot wooden clog associated with the lower classes in France and Belgium from the 16th to 19th centuries, from its perch in the “Touching the Sole” section, and taps it against a shelf. “Very poor people wore this clog because they could not afford finer materials like leather,” says Gomes. “Back then, the clop-clop-clop was the sound of poverty.”

Heels, on the other hand, have always been regarded as the ultimate finishing touch, not only for their sculptural beauty, but because of how they can redefine proportions and realign the body by imposing a very specific body posture of arched back, lifted buttocks and accentuated breasts.

Marilyn Monroe allegedly shaved half an inch off one heel to perfect the trademark wiggle in her walk. Geishas in 18th-century Japan required the assistance of personal maids to ensure they didn’t take a tumble from their getas, traditional sandals with an elevated wooden base, while navigating the streets. Likewise, aristocrats and courtesans in 15th-, 16th- and 17th-century Venice favored the chopine — a platform shoe that literally and figuratively elevated a woman’s status, protected the hem of her garments and showed off the length of expensive and highly coveted fabrics to their fullest advantage.

High heels first came into vogue in the Middle East during the 15th century. When cavaliers in the military needed additional support to stabilize themselves while standing in the saddle, heels were added as a fulcrum between the foot and stirrup. Louis XIV, who was short in stature but long in ego, subsequently appropriated the heel and tall wigs to create an optical illusion of height.

At the other end of the spectrum was China’s Qing dynasty, where minuscule footprints were highly prized among matchmakers working on behalf of wealthy bachelors.

Between the ages of four to six, little girls’ feet were broken and bound so they might fall into one of three categories: an iron lotus, silver lotus or golden lotus — indicating feet that were over four inches long, four inches or three inches, respectively. Ultimately, bound feet signified a woman’s status as a lady of leisure who was restricted to the domestic sphere and did not have to work in the fields.

“Collections like these are an ideal teaching tool,” says Gomes, “not only for fashion and accessory design majors at SCAD, but for any student of art, history, film or interior design.”

“I hope visitors will be impressed by the range and quality of the shoes in the exhibition,” says Persson, “but also surprised by the cross-cultural similarities — linking the past to the present, Far West with the Far East — and begin to contemplate their own shoe choices.”