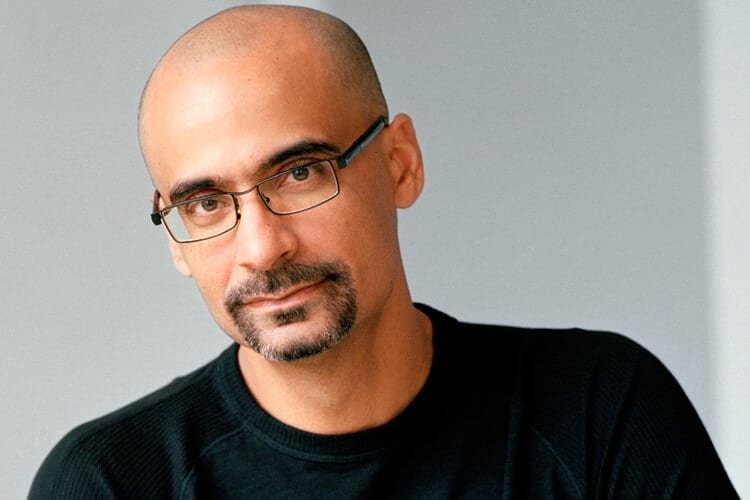 “Outcomes of the unquiet mind”: Junot Díaz on writing, injustice and the narrative of the invader

Junot Díaz is known for many things: his vivid fiction with compelling imagery, his willingness to speak openly and honestly about race, injustice and the civic responsibilities of us all, and winning a Pulitzer prize.

The three-time author, born in the Dominican Republic and raised in New Jersey, presented the esteemed Goodrich C. White Lecture at Emory University on April 12. The roughly hour-and-a-half talk, held in the Schwartz Center for the Performing Arts, wasn’t a standard conciliatory talk.

Díaz immediately delved into the nitty-gritty, acknowledging Georgia’s own complicated history with its immigrant population. It’s a topic he’s been mentally tussling with quite a bit as he contemplates his next project and the possibility of focusing it on the radicalized narrative of the invader and the invasion novel as a genre.

“The invasion narrative is one that is deeply embedded in America’s ideals of itself and sense of security,” he said. “For me as a writer, I’m deeply aware that the narratives and the stories that we tell ourselves not only reflect on our anxieties and our fears [. . .] but they also represent desires. And they are, themselves, very dangerous.”

Díaz spent a short time talking to the audience before opening up the floor to questions. Always intentional with his actions, Díaz prioritized women of African descent to ask questions first, followed by all other women, then men.

It was one of the last questions of the evening, a man identifying as Pakistani and Muslim who asked him what was the plan and endgame for conquering the unending onslaught of xenophobic racism, that left an unfettered sense of silence over the room. The sentiment was that piercingly profound.

“Oppression is a very simplistic methodology,” Díaz started in response. “Most folks don’t think too much about our systems of oppression. We outsource how we oppress people. [It’s] systemic. It’s longitudinal. It’s complex.”

A huge part of freedom, a huge part of approaching it and holding it as our own, and the key to standing against injustice, according to Díaz, is honoring the dead, our ancestors who came before us.

The afternoon prior to his talk, I chatted briefly with Díaz. I knew from reading up on the many interviews he’d done the subjects he was very vocal about, but I wanted to know if those viewpoints intersected, if at all, with Díaz the writer.

Much to my surprise and consolation, I learned that Díaz sings the tune of many other writers, young or old, novice or accomplished, learning or published — that writing in its artistry and execution is complex. “I wish I had, after all these years, a good framework for approaching my own work,” he said. “I honestly find it deeply frustrating so I don’t. Things that worked in the past don’t work again and things that didn’t work in the past suddenly work.”

Writing tends to be one revelatory experience after another, he hinted, with no one writer truly being clued in to where their writing may be taking them or growing them into.

“I do think these are difficult challenges,” Díaz said. “To write stories. To write poems. To write essays. It’s difficult to write. Ultimately, there’s no understanding of how we become the writers we become. Perhaps we get glimpses and tell ourselves tales about our origin, but it’s impossible to know how it is we evolve.”

The trial and error is part of writing, Díaz let on as we talked, and in the end, the uncertainty of it all is part of the process — and the journey.

“I find myself more addled about being a writer more than almost anything,” he said. “I am endlessly struck by how mysterious this all is to me now. The more I do this, the longer I am a writer, the mystery only seems to deepen. I think I’m more struck by the mystery as the years go along than any of the former facile explanations, which probably says a lot about me. Sort of the outcomes of the unquiet mind.”