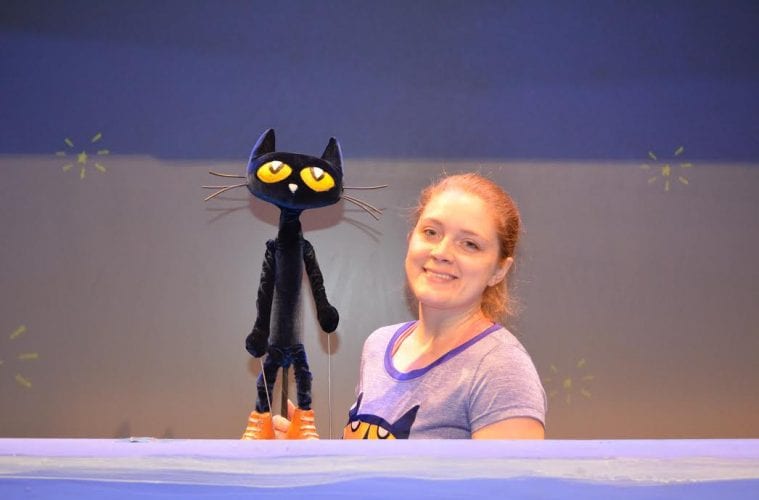 Preview: With guitar in hand, the beloved Pete the Cat springs to life at Center for Puppetry Arts

When 24-year-old Anna Claire Walker moved to Atlanta after graduating with a bachelor’s degree in musical theatre from Auburn University, she was determined to get involved with the city’s theatre scene. She accepted an internship with the Center for Puppetry Arts and soon discovered a love for an art form that she had not previously explored. When the internship was over, she decided to audition for a few shows, and now she is taking on her biggest role yet. She is starring as the beloved lanky, blue, guitar-playing feline Pete the Cat, onstage at the Center for Puppetry Arts through May 28.

“I had never done puppetry before, and the first show I interned for had a lot of different styles of puppetry in it, so I got to learn a lot about puppetry then,” Walker says. “When I got cast in The Little Pirate Mermaid, a marionette show, last summer, Jon Ludwig taught an additional class and that’s how I learned that style of puppetry.”

In the meantime, Ludwig — the Center for Puppetry Arts’ artistic director — was already working on taking Pete the Cat from 2-D to 3-D. “So many people came to us and asked if we had ever considered doing Pete the Cat,” Ludwig says. “His fan base here in Atlanta is huge. He’s a superhero. He’s like a rock star when the kids see him onstage, it’s like Mick Jagger.” 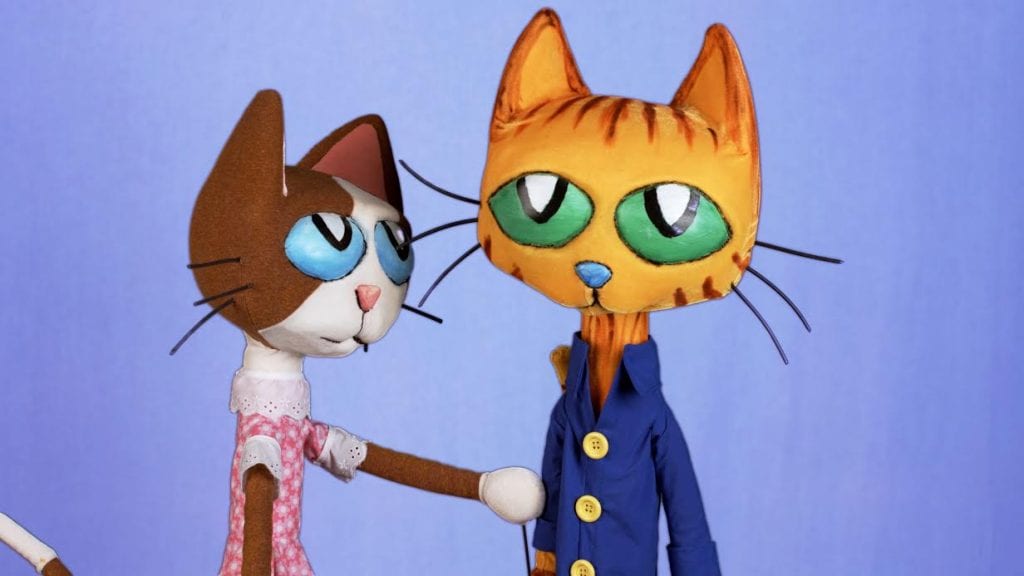 Pete the Cat has become a beloved children’s book character.

Ludwig reached out to the creator of Pete the Cat, author James Dean, who lives in Savannah. He was pleasantly surprised that they shared a mutual adoration for each other’s work. Dean and his wife came up with the idea for Pete the Cat in 2004, and Pete the Cat and His Magic Sunglasses was the first book they wrote together. Now, there are more than a dozen Pete the Cat art prints and books for readers of all ages.

“Pete the Cat is just cool, and we really like the books a lot,” Ludwig says. “I like the messages that James Dean puts in his stories, like that things might not go right, but maybe that’s the way they should have gone.”

In preparation to bring the storybook character to life, Ludwig and puppeteer Jason Hines collaborated with the education program at Georgia State University to do workshops with elementary school students. They asked the kids which stories they would be interested in seeing onstage, and they had the kids create drawings of what resonated most with them from the books. This is how they determined that rod puppets were the best way to go to create Pete’s world.

“The kids were so imaginative, and after a while we started to see that most of the kids drew his head, so the set looks like a giant cat head,” Ludwig says. “Pete’s world is very bold and broad. String puppets would be too fussy. Shadow puppets wouldn’t look like the characters at all. Hand puppets would be two small. So, we settled on rod puppets, to make everything look as much like the books as possible.”

Walker had some research of her own to do in order to portray the iconic electric guitar-playing cat. She recalled reading the books to kids when she was a nanny, but in this role it was especially important to her to capture Pete’s voice.

“I had to figure out what the kids think Pete sounds like, and what they hear when they’re reading in their heads,” Walker says. “He’s such a cool cat with a big personality. I had to figure out how to embody that and find a voice that is sustainable for a two-month run.”

The story, which features a blend of rock and blues sing-along tunes created by musician Dolph Amick, comprises several popular Pete the Cat stories. Some of the stories are: “Pete the Cat and the Bedtime Blues,” “The Wheels on the Bus,” “Scuba-Cat,” “Robo-Pete” and “Pete’s Big Lunch.” Audiences can expect appearances by Pete’s friend Gus, the drum-playing platypus, Callie, the cat next door, Alligator, Octopus, Principal Nancy, and Mom and Dad.

“I really love the lunch story,” Walker says. “That story is so fun because he makes a Frankenstein out of his lunch and the kids get a kick out of it. That was one of the coolest moments to rehearse, and one of my favorite props to use in the show.”

There are create-a-puppet workshops before every performance where kids can make a Pete hand puppet. There will also be a sensory-friendly performance with staff members trained to interact with kids who have Autism Spectrum Disorder on April 23, and other planned events.

“My favorite part is being able to play a kid, which is something I would not get to do in more [realistic] theatre,” Walker says. “He’s too cool for school and has this rock ’n’ roll vibe. The stories teach kids that there’s no problem too big to solve. It’s a joy to get up and come here every day to do this. It makes me feel like a kid again.”