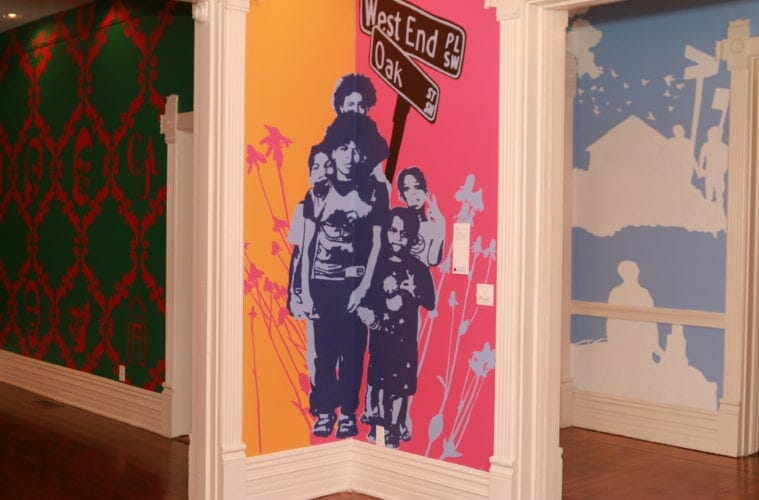 A community’s appearance can be rearranged, but its heartbeat — the character of those who live community – cannot. Artist Shanequa Gay’s murals speak to history and community in LIT WITHOUT SHERMAN: A Love Letter to the West End (through October 15 at Hammonds House Museum).

The exhibition, which took Gay 21 days to complete, is a labor of love and a testament to Gay, whose work can be “public- and exchange-based, explore current social and ethical issues, and focus on the experiences of African-ascendant bodies and communities.” 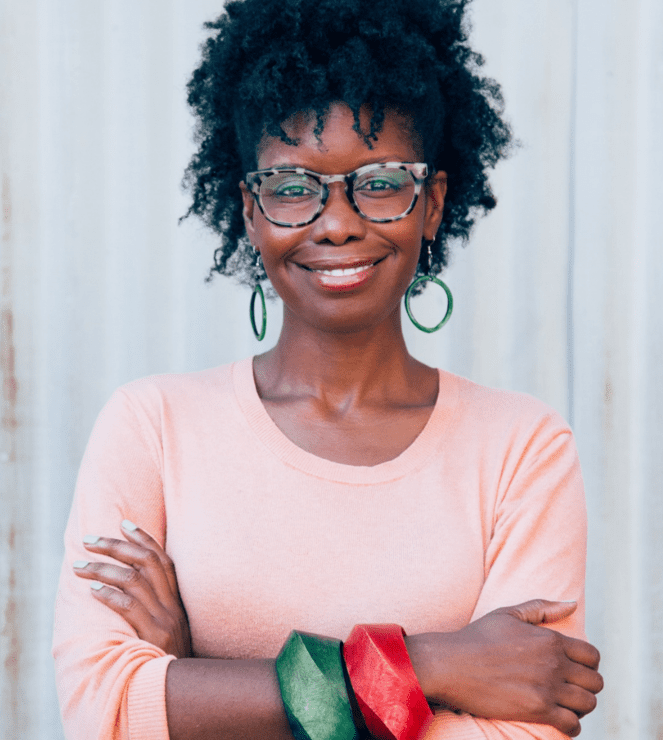 The next room features W.E.B. Du Bois as a drum major, poised high above a fireplace mantel in an ode to the Atlanta University Center. You’ll see the distinct logo lettering of Clark Atlanta University and Morehouse College, the pillared arch logo of Spelman College and facial outlines of men and women inside filigree-style painted frames. Gay’s inverted use of red, black and green is a message of pride. Like the Pan-African flag, it speaks to the black liberation integral to the West End community.

Just as Hammonds House speaks to the art of the African diaspora, Gay’s art speaks to West End. There’s a playful peacefulness, an almost imaginary side to her work, from her use of blue to her bold illustrations.

Literature or gallery information would help serve as a guide here. Newcomers may not realize that recorded voices heard in the distance are part of the show. They come from those who grew up, spent time or still live in West End, and they give these love letters context. In a video collaboration, the people in Gay’s stationary illustrations walk out of the stillness to share their stories. Gay and the museum want to showcase community, so videos of historically black college and university alumni, business owners and neighbors speak to the area’s glory and challenges. 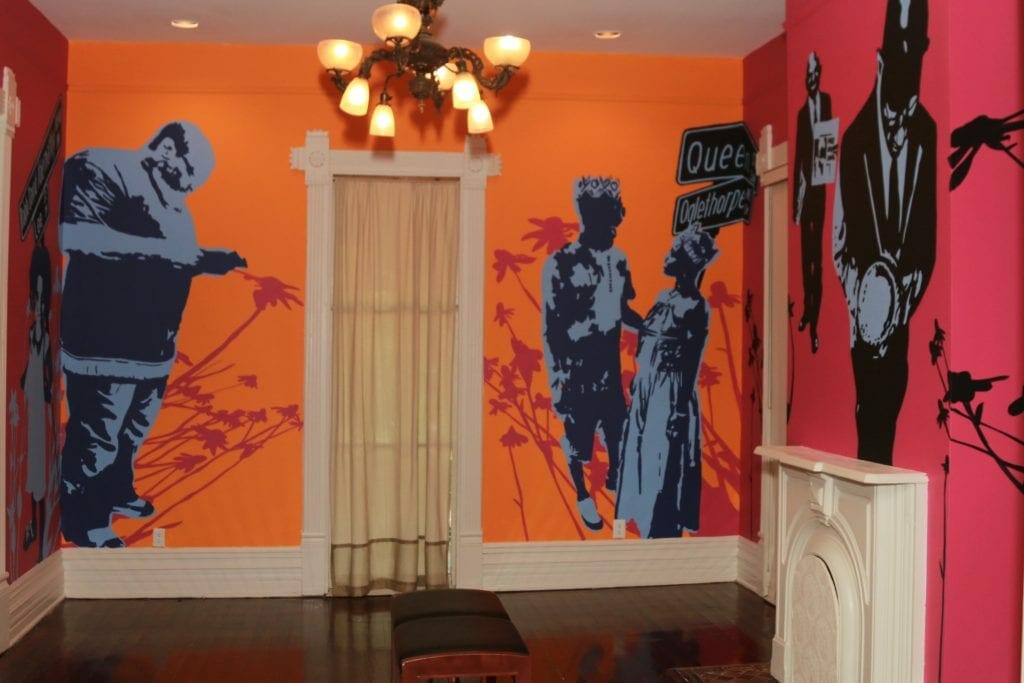 The larger-than-life Welcoming Committee greets visitors in a space around the corner from the museum’s entrance.

In many respects, West End was an authentic live-work-play community before the term came into popular use a decade ago. In his video, spoken-word poet Adán Bean describes West End as the “sauce secret that was best kept . . . we lived without Sherman.”

Gay’s childhood connection to West End was time spent at her grandmother’s house on Oak Street. LIT WITHOUT SHERMAN, she says, “doesn’t hide from history. Stories speak as loudly and as quietly on every available inch of the walls, a visual coded language.” The phrase “million-dollar block” shows up several times and refers to drug dealing. It’s clear that Gay doesn’t back away from the truth regardless of its ugliness. 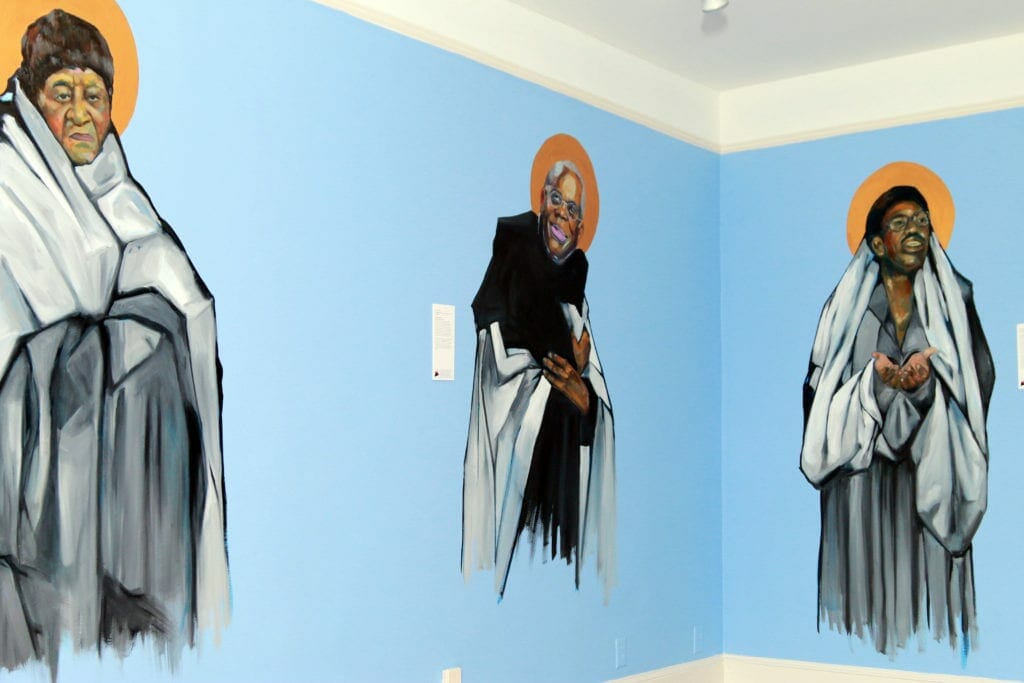 Her fanciful characterizations continue after the first landing (the museum offers access for those with physical challenges). You’ll experience the exhibit’s crowning glory as natural light shines through a bay window. Ahead are six larger-scale angelic beings, announced in a black-and-gold banner as West End Saints — civil rights activist Jamil Abdullah Al-Amin (aka H. Rap Brown); novelist/playwright Pearl Cleage; the Rev. Albert B. Cleage, a religious leader and founder of the Shrine of the Black Madonna bookstore; Lottie Watkins, the first black woman to sell real estate in Atlanta; funeral home director Willie A. Watkins; and Dr. Otis Hammonds, the physician and arts patron for whom the museum is named.

Gay displays the fully colored skin tones and spirited facial details of each saint; all wear variations of flowing gray and black robes. Sacredness. You won’t see the saints’ complete bodies, just wisps of robing. Each has a subtle streak or two reminiscent of the blue hue seen in the gallery below. It’s as if the saints are speaking their own West End love, passing the emotion forward as life lessons that must continue.

LIT WITHOUT SHERMAN: A Love Letter to the West End is more than buildings and historic markers. It’s a love letter of humanity, pride and the will to endure.