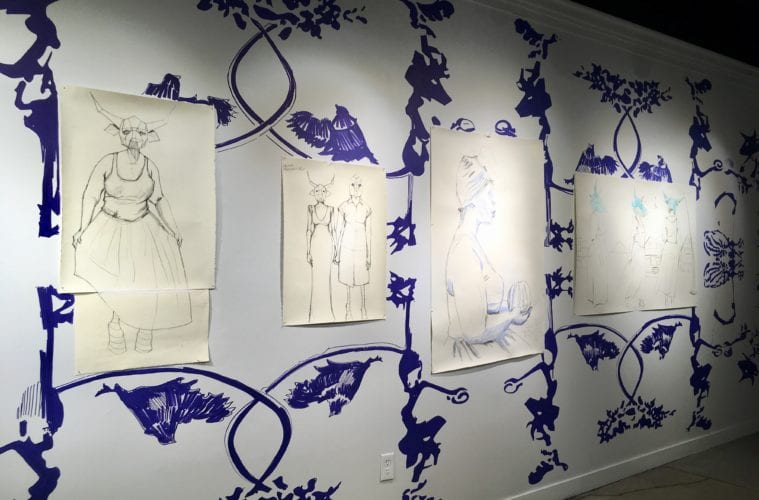 "The Devout Griot, Emotional Keeper" by Shanequa Gay runs through April 30 at Anne O Art. (Courtesy of the gallery and the artist)

Shanequa Gay on myth, blackness and the feminine in Devout Griot

Shanequa Gay can’t imagine a life without art. Her first work came at age three — a mix of crayon and other materials used on her mother’s wall. In grade school, friends would commission her to do their poster-board book reports. In high school, the Atlanta native would draw on people’s clothing and create murals. As a SCAD undergrad, she began playing with figurative work and ideas of spirit (preceded by an associate degree in graphic design and fashion marketing from the Art Institute of Atlanta and followed by an M.F.A. in art history from Georgia State).

The stakes increased in 2006 when a friend challenged her to stop being a hobbyist and take her art seriously. She has exhibited and been collected locally, nationally and internationally. Now she gives us The Devout Griot, Emotional Keeper, running through April 30 at Buckhead’s Anne O Art, “a gallery of illumination and inquiry.”

The word “griot” refers to West African musician-entertainers whose performances include tribal histories and genealogies. It’s a natural fit for Gay’s art and ideology.

Visitors to The Devout Griot will see paintings, video, typography and 10-foot-tall sculptural figures that live in both the physical and spiritual worlds. They’re made of paper, weaving and blue macramé and wear dresses in a patterned print of Gay’s creation. Viewers will first encounter masked hybrid beings — raven, vulture, deer and bull in black and blue with zebra legs. In ancient times, Gay says, women, children and animals were among the first creatures worshiped, a belief system that has eroded with time. She’s interested in creating new myths and making a utopian space of deities that represent the lives of African American women and children.

She recalls a conversation she once heard in which feminist icon Gloria Steinem talked about beliefs. “How can people of color ever imagine true freedom,” she asked, “if they can’t see God in themselves?”

So, Gay — who’s 40ish and has a studio at Georgia State University — seeks to see beauty in blight, to deify black women and to explore the language of the feminine.