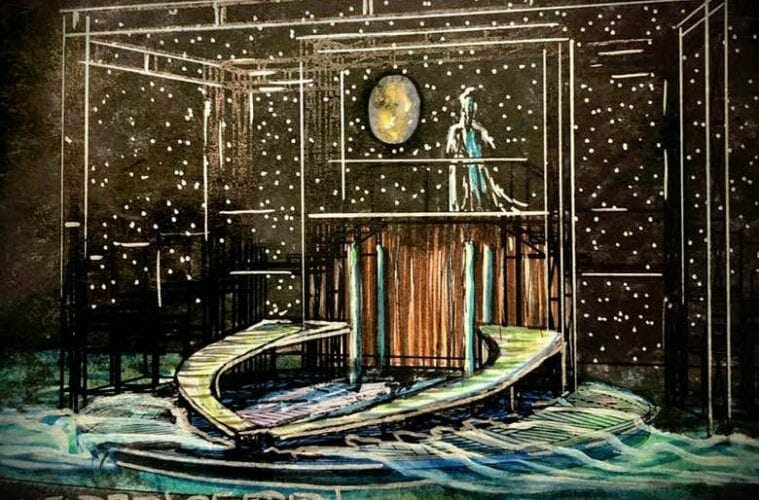 Children of Eden, a lesser-known musical by Stephen Schwartz (Wicked) and John Caird, revisits the Book of Genesis from the fall of Adam and Eve to the Great Flood and Noah’s Ark. It looks at family and love and the relationship between parents and children.

Aurora Theatre in Lawrenceville opens its 2019–20 season with the family-friendly tuner from 1991 with a July 18–September 1 run. Associate artistic director Justin Anderson leads a cast of 22. Today, in an occasional ARTS ATL series that looks at the technical aspects behind upcoming openings, we visit with scenic designer Shannon Robert. “In my mind, everything in this world is black except for the deck, which is the colors of the Earth,” says scenic designer Shannon Robert.

Robert teaches scenic design at Clemson University and, in Atlanta, has designed The Hunchback of Notre Dame (2017) at Aurora and Six Degrees of Separation (2014) at Actor’s Express. She studied at the Moscow Art Theatre Conservatory, has an M.F.A. from Florida State University and has worked as a scenic painter for several national and international tours of Broadway shows.

Children of Eden, she says, uses a scaffolding structure and movable ramps to help tell the story. Set pieces will be unfolded from trap doors that hook onto the scaffolding instead of flying in from above or from the wings. Actors will handle scene changes.

“The act of transitioning from one thing to another becomes a character in the show,” Robert says. “There are going to be pick points with a pulley system so when the tree in the garden of Eden comes up, it’ll be hoisted by the actor.”

Most of the set pieces are made from cloth, which allows lighting designer Maria Cristina Fuste to illuminate inside the structures and projection designer Milton Cordero to put images on the cloth screens.

“In my mind, everything in this world is black except for the deck, which is the colors of the Earth,” Robert says. “The rest of it remains black, unless it is activated by light. The screens become active parts of the set.” Robert’s favorite Eden design is the flood. Ramps on each side of the stage come together to form Noah’s Ark, and the backdrop shows the night sky.

“When we have the flood scene, the stars are going to be activated,” she says. “We have a moon that will show different cycles. The peace of being out at night and the tight picture of nothing but the inside of the ark make a lovely and completely different look.”

Robert wants her set to create an intimate space for storytelling. “I think Justin and this cast have the ability, by the way they tell the story, to find a new angle,” she says. “This production has so many messages of hope, community, caring for your fellow man and what can go wrong when you are focused on yourself and your own needs.”