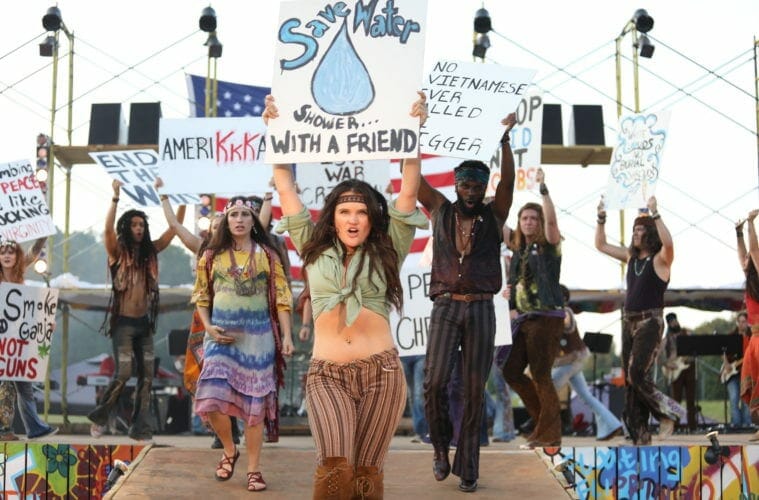 Driving up to Serenbe Playhouse’s 10th-anniversary production of Hair feels like stepping back in time. In the middle of a grassy open field sits a bus and a van painted with peace signs and hearts. Hippies (actors in costume) guide you to your parking space and might offer you a hit from a fake joint. Sitting in the audience feels a lot like being at Woodstock and waiting for Joan Baez to take the stage. This is what Serenbe does best — immerse the audience in a world of its own creation.

The musical opened July 4 (appropriately) and runs through August 18. Director Brian Clowdus has assembled a fantastic creative team, led by music director Ed Thrower. His young cast’s vocal performances are impressive, and the band could go on tour tomorrow. The music from Hair has always been its most lasting impression, particularly the song “The Flesh Failures (Let the Sun Shine in),” composed by the late Galt MacDermot. The song has made a particular impression on hip-hop artists and has been sampled by Mos Def, Trick Daddy and Kanye West.

Erik Teague’s costumes feel like they were pulled straight from someone’s East Village closet. And it’s clear that Kevin Fraizer, who designed lights for the first production, had fun playing with every possible combination of red, white and blue this go-round.

Serenbe first staged Hair in 2013. Clowdus calls it the show that put the company on the map, and it’s easy to see why. The outdoor setting works perfectly with a really talented ensemble of belters. If the show has any flaws, it’s that it’s too free-flowing, and the lyrics and plot can get a little lost. Central characters include a free-loving Navajo man named Berger; Jeanie, a pregnant, pot-smoking hippie; Sheila, an activist; a draft-dodging hot guy named Claude (Zane Phillips); and a spattering of woke black people. I say spattering because in Serenbe’s production, Claude’s crisis of consciousness becomes the focus. This is partly due to the writing and partly due to the choice to play so much at center stage.

Adante Carter makes a memorable Berger, an unabashedly free man who loves whomever he’s loving at the moment. Alexandria Joy (Dionne) and Stephanie Zandra (Ronnie) provide standout vocals in the show’s opening number, “Aquarius,” and keep them coming until the curtain closes. Casey Shuler (as Sheila) proves to be a deft singer with great comedic timing.

When Hair first opened on Broadway in 1968, the lyrics by Gerome Ragni and James Rado gave voice to a generation that saw an imploding world. The Rev. Martin Luther King Jr. had just been assassinated, and Apollo space flights were in the news. Civil rights, women’s rights, gay rights and the Vietnam War had all reached a boiling point. Americans were seeing the best and worst of themselves at the same moment. Students worldwide took to the streets pleading for everyone to “let the sunshine in.” Hair captures that spirit.

The score shows the similarities between the summer of ’69 and the summer of 2019. Then, baby boomers felt that members of the Greatest Generation didn’t get it. Now, millennials feel misunderstood by baby boomers. The labor market keeps the rich getting richer and the poor getting poorer. Environment and global warming concerns ring true in the song “Air,” in which Jeanie sings, “Welcome, sulfur dioxide. Hello, carbon dioxide. The air, the air is everywhere. Breathe deep while you sleep. Breathe deep.” During a protest scene, the young people chant, “Black, white, yellow, red, copulate in a king-size bed! Peace now! Freedom now!” This rallying cry for sexual freedom and racial peace is heard today in shouts of “My body, my choice,” “Black Lives Matter!,” “Water Is Life” and “Viva la Raza!”

Hair is told through a series of psychedelic vignettes that address issues of the day. Sexual freedom, pollution, religion, labor and race are all on the list of grievances. What is this human obsession with thinking that someone else’s freedom is our bondage? Why do we think that binding someone else aids in our own freedom?

Let’s look forward to the day when Hair feels like the musical about the past that it is and love is the ultimate victory. Until then, Serenbe’s production is a great way to let the sun shine in.