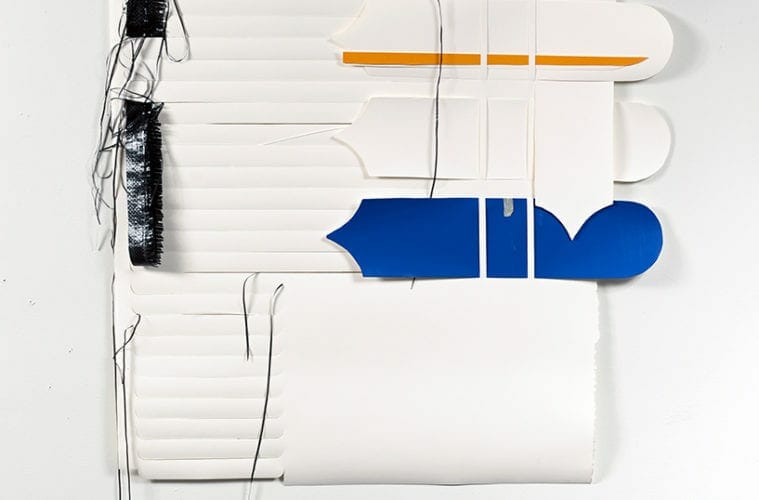 With simultaneous solo and group shows, Krista Clark is clearly an artist to watch

Atlanta artist Krista Clark has two exhibitions open — a solo show at MOCA GA (through August 24) and the group show Recent Drawings at Sandler Hudson Gallery (recently extended through September 14). Now seems a good time to visit with her at Westview Studios on Ralph David Abernathy Boulevard, where she works. Krista Clark began as a printmaker and has degrees from the Atlanta College of Art, New York University and Georgia State University.

She’s been collected by the High Museum of Art and was chosen as one of three artists named a 2018–19 Working Artist Project fellow by MOCA GA. Clark creates installations that push boundaries of volume and concept.

In Clark’s work, two-dimensional drywall pieces act as intermediates between her paper drawings (at Sandler Hudson) and the floor installations in Base Line of Appraisal (at MOCA GA). Subtle hints of color are found throughout the room — a vibrant blue tarp and safety-orange power cords, for example. Clark’s work considers elements of space to create an intimacy inside MOCA GA’s white walls.

She speaks to this shift, saying, “I’ve definitely been headed in that direction, wanting to work more with three-dimensionality, to consider space more and come off of the wall. This was the perfect opportunity to do that. I knew that I wanted there to be conversation between my two-dimensional works, and initially, they were going to be works on paper.”

Clark assembles fragments of construction materials to depict abstract forms and shapes. Working in drywall allows for experimentation as she carves into the flat surface of the board. Etch marks resemble a raw linoleum block, subtly referencing her foundation in printmaking.

Gesturing at wall pieces left out of the exhibition, she says, “those were going to be the basis for the installations, the foundations. I eventually made the shift, wanting the paper pieces to have more weight to them. The idea was that these trial pieces are like architectural plans. The installation is the actualization of this idealized space.” Block by Block is made of paper, insulation, tape, roofing material, graphite, construction fencing, tarp and pastel. It measures 52 x 36 in. (Courtesy of Sandler Hudson Gallery)

The commodification of space is an integral motif in her installations. Much of Clark’s work has a temporal quality, amplified by a choice of everyday objects. By scaling her work into three dimensions, Clark challenges viewers to assess the objects’ value, constructing a sort of utopia. In Base Line of Appraisal, she creates a tension between the impermanence of the drywall and paper-like structures along the wall and the three-dimensional pieces weighed down in concrete.

“There’s an underlying part of the piece that it is not permanent,” she says, “even with the very heavy concrete, and, at some point, will be disassembled. So, I’m still thinking of it as temporary.”

Blue tarp stretches taut between a hook on a back wall and an opposing wooden pillar, disrupting the space. Clark mentions associations between the tarp and maintenance of some kind. Or, perhaps, a family that has lost its house — where the tarp covers destruction brought on by natural disasters.

“The tarp hasn’t provided a clean line,” Clark says. “It probably speaks the most to this transitional space of housing — dilapidated housing and neglect.” Untitled, a 2019 piece, is made of paper, construction fencing and insulation. It measures 78 x 30 in. (Courtesy of Sandler Hudson Gallery)

Strips of orange and black tarp are fixed to her pieces in Recent Drawings, at Sandler Hudson Gallery, which includes works on paper by William Downs, Yanique Norman and Rocío Rodríguez.

Four of Clark’s paper pieces are fastened to the gallery wall. Roofing and insulation are juxtaposed with ornate, scalloped edges cut into large, rectangular sheets of paper. There’s a playful tone in how the pieces of tarp weave in and out of slits in the paper, creating a contained disarray or intentional chaos.

Clark’s minimalist aesthetic is reminiscent of Hang Up or Not Yet (both 1966) by German-born American sculptor Eva Hesse, in which the works’ meaning comes from experimenting with material. Clark references books by such architects as Franz Erhard Walther of Germany and Smiljan Radić of Chile and Croatia as inspiration, and her more recent work is undeniably influenced by her Westview surroundings and neighborhood observations.

“I’m making the work in Atlanta, but not to be specific to that,” she says. “At the same time, I live in Atlanta, and I live in this neighborhood, so that all is informing how I’m making work.”