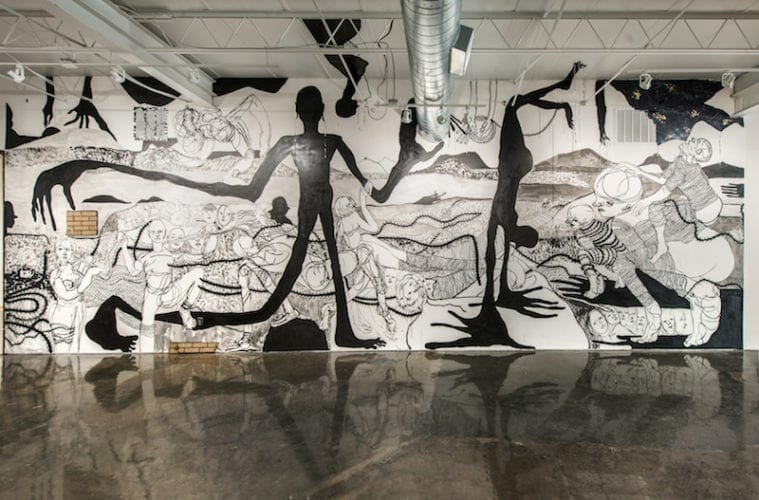 Atlanta's William Downs, who works in ink wash and spray paint on paper, is one of more than 25 artists taking part in the inventive Temporary Art Center exhibition titled "PROJECT." It opens Friday -- and closes when its building is demolished.

As Scott Ingram walks the interior of the Conklin Metal Building — a red-brick industrial complex that will be home base for his Temporary Art Center exhibition, PROJECT (opening Friday) — he says the legwork required for prepping all 66,000 square feet has been monumental. Scott Ingram, the well-connected and creative mind behind the Temporary Art Center, also paints, draws and does sculpture and collage. (Photo by Fredrik Brauer)

“I have no idea how many man-hours have been put into getting this space ready for the opening,” says Ingram, who curated the large-scale, site-specific works that will go on view. “But I can tell you I put 28,000 steps on my Fitbit the day we brought in an industrial sweeper and a heavy-duty wet/dry vacuum just to clean the floors of the Main Hall.”

The concept for PROJECT — as in “a project” or, more importantly, “to project” — comes from the 1988 Freeze exhibition organized by Damien Hirst in London, an event that launched careers for many in the group that came to be called the Young British Artists. Atlanta’s ShedSpace — curator Joey Orr’s annual backyard exhibition series that turned private sheds and garages into mini art spaces — was another inspiration.

The most recent iteration was last fall’s Til the Lights Go Out, an Ingram-curated group show of wall drawings, paintings and installations by Atlanta artists connected to HATHAWAY Contemporary Gallery. It was the last exhibition at HATHAWAY’s original space, and when the building was torn down, the art went with it.

Still, the concept resonated with developers, three of whom contacted Ingram to propose a similar presentation in buildings scheduled for demolition. Ultimately, the scale of Conklin’s industrial architecture and the timeline for its demolition (in late December) proved irresistible.

Ingram’s goals include creating awareness about the high number of artists who begin their careers in Atlanta but migrate elsewhere for better opportunities, and producing a group show that will — he hopes — lead to a new model for how Atlanta invests in and supports artists.

Many artists who started in Atlanta are working and showing nationally and internationally, Ingram says, but aren’t known here. “Some had to turn me down because they were too busy,” he says. “In other cases, we had to borrow works from private collectors because the artist’s works are in such great demand.” The Conklin Metal Building — at 236 Moore Street SE — won’t look like this when “PROJECT” and the Temporary Art Center open Friday, but it won’t be heated either. Dress for warmth and comfort. (Photo by Fredrik Brauer)

Quirkier subsections of the building also will be used creatively. Dana Haugaard will use the deep reverb inside a former vault for his sound installation. Brain Fuzz podcasters will repurpose an office as their studio and do interviews with participating artists. Lonnie Holley will co-opt a 350-square-foot den for a site-specific work. Michi Meko will hang four monumental paintings. Local galleries representing exhibiting artists will use the Temporary as a place to show corporate and private clients large-scale works.

A gift shop will sell the show catalog, publications, merchandise and limited-edition multiples — including posters by Fredrik Brauer and small ceramics by Jiha Moon — with all proceeds supporting the exhibition. Weekend events will include a daylong public symposium with Art Papers (this Saturday, November 16), artist talks and performances. Sarah Hobbs’ “Prom Forever (Basement)” in all its shiny glory

The Temporary is requesting a $15 donation for opening-night tickets (the money will support production of the exhibition catalog). You also can volunteer for free opening-night admission HERE. The show will be open noon–8 p.m. Thursday–Friday, 10 a.m.–6 p.m. Saturday and 11 a.m.–6 p.m. Sunday, December 1 and 29. General admission is free. Please note that there’s no heat inside the Conklin building, so dress for the weather and wear comfortable shoes. All details HERE.

Ingram wants PROJECT to let emerging artists know they needn’t relocate to establish viable careers. He wants returning artists to get reacquainted with Atlanta’s evolving arts and culture landscape. And he wants to create a platform through which established artists can meet their forerunners and inspire their successors.

“I moved to Atlanta 25 years ago to be on the ground floor of something,” says Ingram. “Now I’m trying to rebuild the floors . . . by encouraging emerging artists to be intentional about creating community, asking questions and doing something interesting to sustain the arts ecology here. In my mind, PROJECT was a way to talk to my community. Now, they’re talking back and saying they want more.”