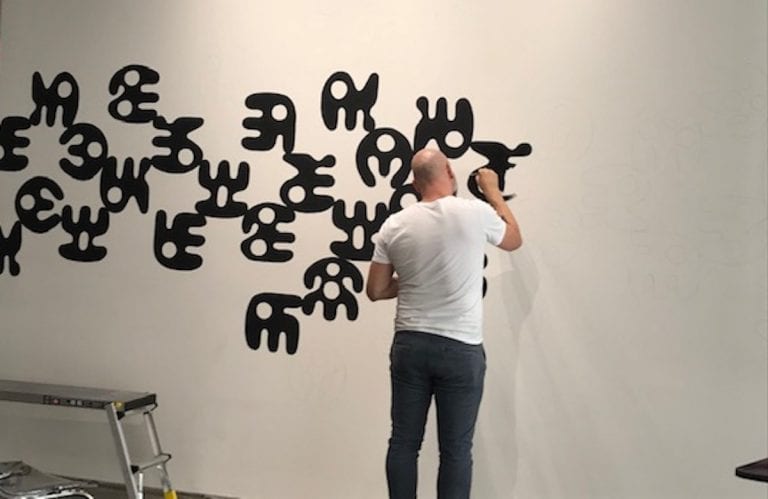 Artist Esteban Patino works on a mural at Hathaway Gallery. The piece, like the rest of the works in the space's final show, will be destroyed along with the gallery. (Image by Rebecca Cochran)

In a changing Atlanta, artists create new works to be destroyed along with the gallery

The skyline of Atlanta is constantly in flux. Recently, along the Howell Mill corridor on the Westside, six-story timber-framed condominiums, multi-story parking decks and and even taller apartment complexes are rapidly replacing older one-story buildings.

The building that has housed Hathaway Gallery for the past few years will soon be torn down to make way for a four-acre, eight-story, $150-million mixed-use development. But before that happens, on November 15, Hathaway Gallery will open Til the Lights Go Out, an exhibition wherein the artworks themselves will be destroyed along with the building.

The artists have been given free reign in the building for just under a week to create their pieces, and a recent visit revealed an intriguing glimpse of what will be on view. Krista Clark was cutting away sections of the walls to reveal the gallery’s structural underpinnings. Amy Pleasant was painting bold silhouette figures while in an adjacent room Wihro Kim was working on a delicate graphite drawing. Joe Peragine’s rabbits amongst stenciled foliage began to populate another room while the faux-wood paneling for Sara Hobbs’ three-dimensional installation was beginning to take form. Kirstin Mitchell, Esteban Patino and Pete Schulte were each working on large-scale geometric paintings that faced one another, creating a triumvirate of pattern and color into which Scott Ingram was planning to insert a series of hanging cinder blocks. And in the back room, Ridley Howard was hanging a selection of paintings, photographs and sculptural installations assembled from Athens-based artists.

Curated by gallery artist Scott Ingram, the show specifically embraces the notion of impermanence by asking artists to create works directly on the walls, floor and ceiling of the gallery with the understanding that they will only exist for the length of the exhibition. Atlanta artists Lloyd Benjamin, Paul Stephen Benjamin, Krista Clark, William Downs, Craig Drennen, Sarah Emerson, Sarah Hobbs, Wihro Kim, Michi Meko, Kirstin Mitchell, Esteban Patino, Joseph Peragine, Jason Scholtz and Tori Tinsley, as well as Birmingham artists Amy Pleasant and Pete Schulte and a group of Athens artists organized by Howards Gallery, all signed on to create work with the building as their canvas.

Ingram views the communal nature of the exhibition as a fitting tribute to the artists and gallerists who pioneered the area.  “When I moved to Atlanta in 1995, what is now known as the Westside was expanse of empty low-slung buildings, mostly warehouse spaces consuming the landscape,” he explains. “About 10 years ago, galleries like GET THIS! and Saltworks joined Marilyn Kiang, Sandler Hudson and Emily Amy among others in the neighborhood, creating a vibrant arts district. It was another short chapter in Atlanta’s art history as the neighborhood changed and the arts were pushed out to find new neighborhoods.”

The Westside reflects the common cycle of artists and galleries drawn to less traveled neighborhoods by cheap rent, making the area hip and fashionable, only to be pushed out by gentrification.

Laura Hathaway, owner of the eponymous gallery, has a background in real estate and is committed to staying in the area. She convinced the new developers to build out an alternative space for the gallery that will front the development on the Howell Mill side. “I was a broker in six states and understand real estate development, so I was able to bridge the gap to explain the importance of an art community while understanding development,” says Hathaway. “Jim [Meyer of Atlantic Capital Properties] and Mack [Reese of Gateway Ventures] were interested in learning about our business. They want to incorporate the arts community in their development and have contractually committed to collecting art from us for the new building.”

The smaller but more visible location will debut with an exhibition by Tori Tinsley the same night as Ingram’s show.

Hathaway’s original space will be torn down within the month, as soon as the developers can secure the permit. Ingram is working closely with the demolition crew to place video and still cameras in the space so that he can film the destruction. Until that time, he says the art at Hathaway will exist together, an homage to the perseverance of culture and the creative spirit in a rapidly changing city.