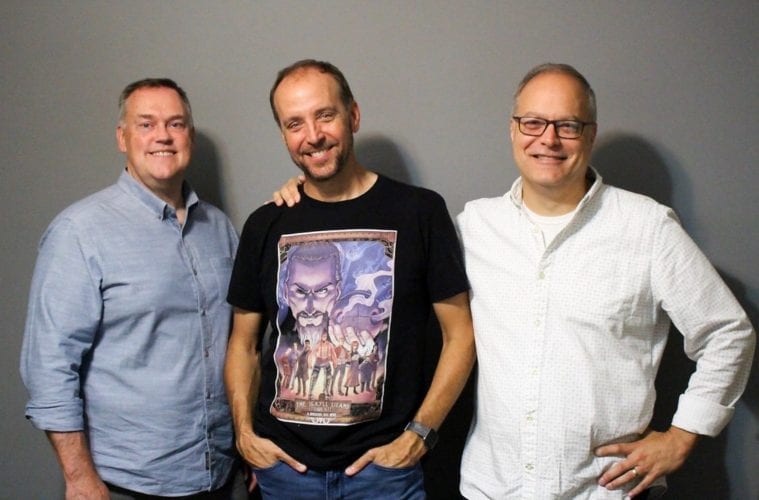 You can probably trace the origins of a lot of comic books to a basement room somewhere. Usually, it’s kids gathering to do the dreaming and plotting in a downstairs room, but in the case of The Jekyll Island Chronicles, it was three Atlanta-area dads who got together to dream up the epic story of a superhero group formed in the aftermath of World War I. The second book in the graphic novel series The Jekyll Island Chronicles was published this month.

“We all three were dads with kids in school and full-time jobs,” says Steve Nedvidek. One afternoon in 2012, Nedvidek invited his longtime friends and fellow comic fans Ed Crowell and Jack Lowe into his basement in Kennesaw to begin discussing the possibility of creating their own graphic novel. Long fascinated by the idea of a superhero group formed in the relatively unexplored post-World War I period, Nedvidek found his friends were just as excited and intrigued by the idea as he was. “We had this trifecta that began meeting in my basement to sketch this thing out,” he recalls. “Ed was the one who said, ‘Have you ever heard of Jekyll Island?’”

Set in the early 20th century, The Jekyll Island Chronicles tells an alternate history of the turbulent post-World War I period of American history. In the graphic novels, a band of war veterans with extraordinary abilities comes together at the behest of industrialists in order to fight a powerful cabal of anarchists. The fictional story is set across the globe, but the industrial giants who organize the group of superheroes are based on very real figures Carnegie, Morgan, Rockefeller and Vanderbilt, who make their plans, just as they did in real life, at Georgia’s Jekyll Island Club.

“It’s like the thing started to write itself,” says Nedvidek, who at the time worked a corporate job at Chick-fil-a. The three wove together a fictional narrative based on real historical events of the time period, such as a series of mail bombings of prominent figures in 1919 and a Wall Street bombing in 1920. The three call themselves the “Lost Mountain Mechanicals” since they all live close to the Lost Mountain area in Kennesaw, with the term “mechanicals” coming from the comic playmakers in Shakespeare’s A Midsummer Night’s Dream. “It’s the group of working stiffs who are trying to do something creative,” says Nedvidek. The authors gathered in Steve Nedvidek’s basement to plot out The Jekyll Island Chronicles.

“The timing of Steve’s interest in working on a project was perfect,” says Ed Crowell, a politics and history buff who is currently president of the Georgia Motor and Trucking Association. “My children were both in college, and Cynthia, my wife, was ready to explore some new creative hobbies of her own as well. The time period was perfect, too. That era of 1910s to 1930s was one of extremes in wealth, social change, political upheaval, technological advances and more. But it is mostly forgotten and as such is a great big open playing field for our story and our characters.”

“This particular moment, between the World Wars, saw change like none other,” agrees Jack Lowe, a longtime Disney fan, with a wife and three kids, who works for Chick-fil-a in the culture department. “All we needed were the characters to inhabit our story, who were motivated as I believe I would be motivated in the same situations, and I knew we would be on to something.”

Once the three of them had their plot in hand, they went to the Savannah College of Art and Design, since none of them had any experience drawing comics. They sponsored a class, as Nedvidek had done for his work before, and an upper-level sequential arts class of ten students began to help the trio put together a pitch package. “It was great for them because Jekyll was only 80 miles away,” says Nedvidek. “They could get into cars and go.” Jekyll Island and its famous millionaire’s club became an important setting in the graphic novels.

Nedvidek also went down to Jekyll to research and take pictures, even staying in the famous round tower room and exploring different parts of the island like Driftwood Beach that would become settings for the story. “We have a world that was already created,” he says. “You can walk through the Rockefellers’ home. You can see the layout of all the different buildings. It’s just as it was. It’s all stayed intact.”

Once they had their pitch packet, they took it to Marietta’s Top Shelf Productions, and the very next day the company called to say they were interested in publishing the series.

“It was like the dog that caught the car,” says Nedvidek. “We were like: Now what do we do?” The three raised funds on Kickstarter and ended up working closely with two now-graduated artists from the class at SCAD — J. Moses Nester and S.J. Miller — to create the first book in the series. Jekyll Island Chronicles (Book One): A Machine Age War was published in May of 2016, and the second book, A Devil’s Reach, was released this November, timed with the 100th anniversary of the armistice of World War I.

The authors say they plan to finish at least three Jekyll Island Chronicle books and see what happens. Nedvidek has retired, but the other two still have full-time jobs.

“I’ll continue to work on it as long as I’m enjoying it and as long as other people are,” says Nedvidek of figuring out how to navigate the creative process with his friends. “I get why the Beatles broke up. It’s hard: you have to work through some of these things. You have to hold it loosely. You have to be willing to bet on some things. We’re chasing a dream. This is our hobby because none of us play golf particularly well. We’ve learned along the way if you want to make a lot of money, don’t write books! But still we’re doing it as a passion project. We love it.”

Steve Nedvidek, Ed Crowell and Jack Lowe will speak about The Jekyll Island Chronicles on November 14 at 7:15 p.m. at the Decatur Library Auditorium.