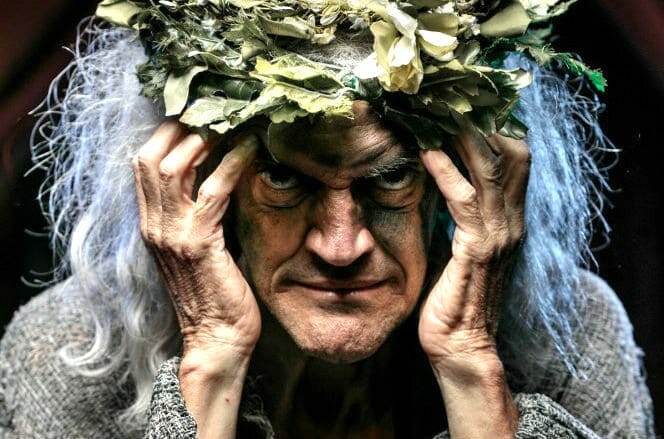 "I fear I am not in my perfect mind." Longtime Atlanta actor Chris Kayser takes his turn as Lear at the Shakespeare Tavern.

An old, mad leader, full of pomp and arrogance regarding his own greatness, bestows entirely too much power on his lying, power-hungry children, and the world falls into a storm of chaos, bickering and violence as a result.

It’s tempting to say that Shakespeare’s King Lear has much to teach us in the Trump era, which it does, but the tragedy is, truly, timeless. Audiences will always need to be reminded of the folly that comes when crazy people come to power followed with blind devotion. Our emperors often have no clothes. It’s a perennial circumstance.

Still, in the Shakespeare Tavern Playhouse production (onstage through November 24), a great moment occurs when Gloucester — a nobleman whose eyes have been gouged by people he trusted — turns toward the audience and says: “Tis the time’s plague when madmen lead the blind.” Maurice Ralston delivers the line with a relish and a smirk. Even blindfolded, he looks at us, assuring we’re all in on the joke. The Shakespeare Tavern Playhouse company includes (from left) Gina Rickicki as Regan, Tamil Periasamy as Cornwall, Natalie Karp as the Fool, Chris Kayser as Lear, Maurice Ralston as Gloucester, Drew Reeves as Albany and Anja Lee as Goneril. (All photos by Jeff Watkins)

There’s much to love in this staging, which gives longtime Atlanta actor Chris Kayser (just out of the very modern Skintight at Actor’s Express) the chance to inhabit the title role he was scheduled to play at Georgia Shakespeare in 2014, the season the company closed.

Kayser’s take on Lear is persuasive and emotional, particularly in the later acts when the king’s reason has vanished. Though he seems oddly restrained and too quiet in opening scenes, even as his character rants to the heavens in the storms of Act II, the actor’s heart pours out onstage in later acts. His choices are unexpected, and the performance builds considerably. By the time he’s wild-haired and wearing a crown of leaves, Lear alternates between sleeplessness, madness and despair over all that he’s lost. Kayser’s physicality in those final moments — beyond his line delivery — devastates.

The ensemble shares Kayser’s spotlight. As Gloucester, Ralston chooses restraint and, instead of filling the character with bluster, speaks softly, calmly insulting his bastard son, Edmund, as the tragedy opens. Thus, the audience commiserates with Edmund (Chris Hecke), ultimately a deceptive liar. Chris Hecke (from left) as Edmund, Maurice Ralston as Gloucester and Matt Nitchie as Kent

Hecke uses audience members’ sympathies during Edmund’s first soliloquy, seducing them with his plans of vengeance and making them complicit in his treachery. When other characters fall into Edmund’s traps, we understand how it happens because he’s done it to us.

As Lear’s falsely loyal daughters, Goneril and Regan, Anja Lee and Gina Rickicki register as delightfully wicked. Their scenes together, as they plot their father’s downfall, then condescend to him and complain about his age and burdensome needs, feel contemporary, much like an August: Osage County.

Rickicki’s wry asides and expressive face give Regan an edge, particularly as she tortures people. As the kind Cordelia, banished for honesty, Alexandra Pica gets little onstage time but conveys grace and heart. Decency is hard to play when you’re surrounded by madness and eye-gouging, and she does so well. As Lear’s allies, Matt Nitchie, Natalie Karp and Kenneth Wigley imbue their characters with strength and rooting interest. The excellent Nitchie conveys loyalty and devotion. Wigley, who spends much of the play in a loincloth as Edgar’s mad alter ego, Poor Tom, is deeply affecting as he finds his father has been tortured and mutilated. Karp, playing the Fool who confides knowledge and criticism of Lear to the audience, charms.

Artistic director Jeff Watkins directs, and the technical aspects of his production impress most during big moments, like the storm. When the thunder roars from the rafters, and you see the thunder sheets shaking from above, it’s more charming than jarring. Part of the magic of attending a tavern show is seeing how it works, grabbing food and drink at intermission and having actors occasionally acknowledge the audience with a nod.

This is a Lear that’s relevant, emotional and satisfying.