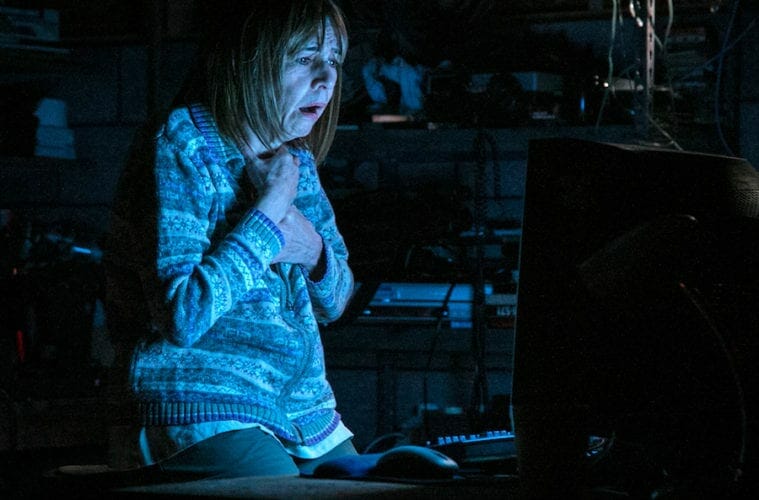 Review: Let Actor’s Express take you to a most thrilling 100 minutes with “Downstairs”

When a thing is over, Atlanta audiences can be crazy-quick to jump up and bestow a standing ovation on a cast (or orchestra or singer or what-have-you).

It’d be great if standing ovations were reserved only for the exceptionally deserving — such as the top-drawer, three-member cast of Downstairs, the quietly creepy and fully absorbing 2017 Theresa Rebeck drama at Actor’s Express through December 1.

On opening night of this 100-minute, no-intermission drama, the audience complied. The applause was rigorous, sincere and hugely justified. It was as if the actors — Mary Lynn Owen  and Travis Smith as sad-sack, beyond-their-prime siblings and William S. Murphey as a threatening husband — had run a marathon, and could finally get a long swig of water and some peace. (And, yet, there’s no running in this thriller.)

Rebeck is among a handful of top-tier contemporary women playwrights. She was a Pulitzer Prize finalist in 2004 for Omnium Gatherum, a dinner-party satire involving a wide variety of characters and opinions (cowritten with Alexandra Gersten-Vassilaros). Her first of several  Broadway plays was Mauritius (2007), about sisters who inherit a stamp collection and the culture of stamp collecting itself. Mary Lynn Owen as Irene and Travis Smith as Teddy, an unhappy sister and brother stuck in the past. Set design by Isabel and Moriah Curley-Clay.

There’s tremendous breadth and scope to her work but also commonality. What often seeps through is an exploration of good versus evil, especially in terms of the terrible choices people make and the awful ways in which they treat one another.

“I’m interested in what drives people to poor behavior,” Rebeck once told the New York Times. “I do believe that there are monsters out there and that they are monsters.”

With some 25 full-length plays and as many one-acts to her credit, Rebeck — who holds a doctorate in Victorian melodrama — considers live theater her main squeeze. (She’s also a novelist with substantial writing credits in television and feature films.)

Several years ago, after working with actor Tim Daly, Rebeck asked him what they might do next. He suggested she write a play for him and older sister Tyne Daly. About a year later, Rebeck had the Downstairs script.

The Daly sibs earned fine reviews last year when they appeared on the New York stage together for the first time. It should be noted, however, that the domestic drama is not based on the Dalys. Tim never had to shack up in his sister’s basement, rooting around to find something with which to eat his dry cereal. A word about that basement. It’s created for the Express by the award-winning scenic design team of Isabel and Moriah Curley-Clay and is among the most rivetingly realistic sets I’ve seen in 30 years of theatergoing.

You’re not exactly looking into a crude, unfinished space cluttered with stuff and the broken discards of better days (ancient skis, an old golf bag). Rather, the Curley-Clays put you smack into this basement. You’re more like a fascinated little mouse hovering beneath the washing machine, wondering if the humans might throw something at you or ever ease up on their angst, their misgivings, their conflicted childhood memories. If only they could, which is somewhat the point.

You can practically smell the combination of dust and mildew, particle-board walls, the clothes-dryer steam, the oily grime of all those tools. (Very small quibble: The no-rips modern sofa where Teddy sleeps seems a smidge too nice for this sorry, foreboding place.)

Rebeck also has an uncanny talent for writing the way people talk, which often is messy.

Here’s Teddy (Smith), a smart guy and a lost soul, defending his right to stay in Irene’s basement, even though Gerry (Murphey) doesn’t want him there: “I don’t understand what the big deal is, does he need, does he need, because let’s, you know, this is not the Hilton down here. I mean it’s your house too, right? Isn’t it even like mostly your house?”

And here’s Irene (Owens), at once timid, terrified and lost in her troubled thoughts: “It’s nothing. It’s gone. The whole world is gone. How can you pretend that you want something that doesn’t exist. I mean I know people do that. Maybe I do that. I don’t know. Maybe more I just think, I think about that other person I was, when I was 12 or 13.” Downstairs requires champion actors and a sharp, confident director. Actor’s Express more than hits it out of the ballpark with Donya K. Washington, soon to return to Oregon Shakespeare Festival after three seasons producing at the Alliance Theatre. (She also directed the Express’ An Octoroon last season).

She’s the best possible guiding force. Rebeck’s psychological thriller percolates slowly, yet Washington keeps things tight and moving swiftly. Her Downstairs never feels rushed, nor does it drag. You’re just with it. You’re always right in there with it.

Washington also grabs onto the fact that Rebeck’s script gives players a big, fat invitation to make the words their own. So she effectively steps out of the way, enabling each actor to unravel and zing lines into sublime truth and authenticity.

The result is that you won’t find Mary Lynn Owen or Travis Smith or William S. Murphey in the basement this month. They’ve fully morphed into the mousy and defeated Irene, the rumpled and delusional Teddy and the slimy Gerry with every fiber of their beings.