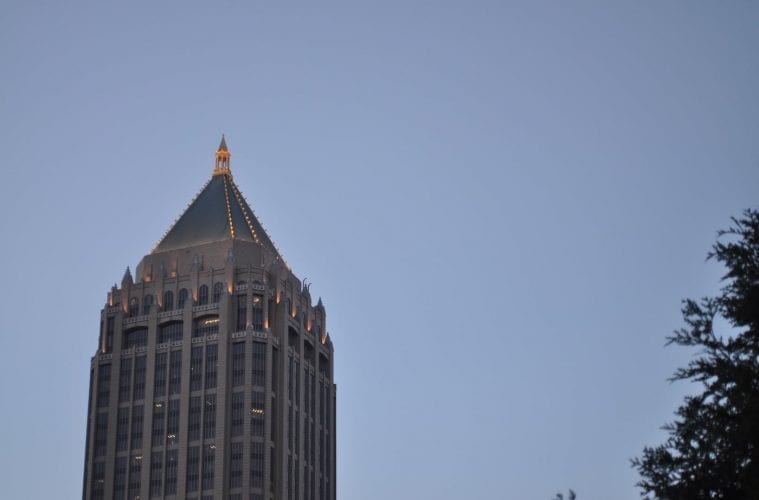 Inspired by the near loss of Breuer’s Central Library (and real loss of countless other buildings), this new 12-part series seeks to highlight buildings Atlantans have resigned to irrelevancy without a second thought. As we look back on the losses of the Loew’s Grand Theatre, the Piedmont Hotel, the original Equitable Building, Terminal Station and several other smaller, yet no-less-important buildings, we learn that demolition of historic fabric is a loss to our city.

While today the Midtown skyline rivals downtown’s, with residential and office towers standing tall, downtown’s supremacy was not in question until recently.

In the 1970s, developers eyed Midtown, seeing plenty of potential along the Peachtree corridor, which was filled with small-scale development. Colony Square was the first major development to come outside of downtown, sparking a small patch of other projects in the 1970s.

However, the trend was short-lived as cyclical economic trends took their toll.

A decade later, when construction began on One Atlantic Center at the corner of West Peachtree and 14th streets in the late 1980s, Midtown was still a very far cry from what it is today.

Constructed as the headquarters for IBM’s southeastern operations, the building was designed as a fusion of both classical and modern elements. The green pointed spire — making the tower the third tallest in Atlanta — is a notable feature of the Atlanta skyline even 30 years after completion.

Designed by acclaimed post-modernists Philip Johnson and John Burgee, the building towered over its surroundings and finally opened as the tallest building in the southeast in 1987.

Built of pink granite and topped by a 100-foot-tall copper pyramid, the building was a statement for its time. The building’s distinctive chamfered corners and Gothic crenellations were like nothing seen before in Atlanta high-rise construction.

Ever the idealist, Johnson set a vision for all four corners of the intersection — then dominated by low-scale commercial development — to one day contain towers that mimicked the architectural style of his original work.

Per Kevin Green of Midtown Alliance, a covenant was put in place that stipulated that on the other three sites “the developer’s architect must have sufficient professional experience to certify that the design is ‘architecturally compatible’” with the Johnson building. It did not, however, require any further approvals from the ownership of One Atlantic Center. In hindsight, that was an oversight.

More than a decade after the completion of One Atlantic Center, ground broke across West Peachtree Street on the complex’s second tower.

While destined to only rise to 24 floors, Atlantic Center Plaza was designed to mimic its big brother through a similar material palette and co-opting of the overall architectural style.

Renamed Regions Plaza in 2013, the Smallwood, Reynolds, Stewart, Stewart-designed building is likely the product of value engineering. The façade has far less depth than the original building, and the truncated brown roof sits unceremonially on the top of a far less finessed composition. 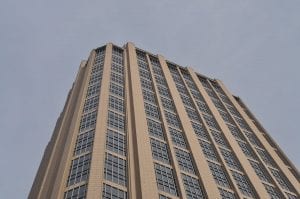 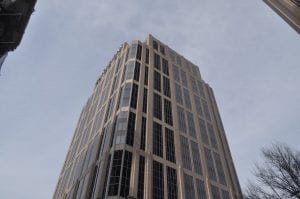 Regions Plaza, which did much to imitate its neighbor, lacks its depth and character.

When comparing the two towers side-by-side, the 2001 building is notably inferior, though clearly intended to match Johnson’s original. It now serves to elevate the stature of One Atlantic Center, highlighting the idiom that we “don’t build them like we used to.”

Meanwhile, the two opposing corners, on the south side of 14th Street, would remain undeveloped as Atlanta rode the roller coaster from boom to recession.

When Johnson and Burgee designed One Atlantic Center, it’s likely the pair imagined that the four corners at 14th and West Peachtree streets could one day be the heart of Midtown’s business district.

However, as in-town development has shifted from office space to residential to support the influx of people moving into the city, the market has adapted — One Atlantic Center was ultimately not destined to be the iconic centerpiece of a commercial center, but rather just another tower among the growing hodgepodge of Midtown Atlanta.

The sites were ultimately destined to house residential uses.

The fact that Novare elected to place their parking deck on the corner, directly across from Johnson’s original building, was far from ideal. At least the design team did their best to mask the mass, using pink granite and faux windows to reference Johnson’s work. On the residential tower, the concrete was tinted to pick up the hues of its neighbor, while the balcony railings of each unit employ patterns found in Johnson’s work.

For a developer known for replicating the same building ad nauseam, going to the effort to at least be referential to the context is lamentably worth acknowledging. 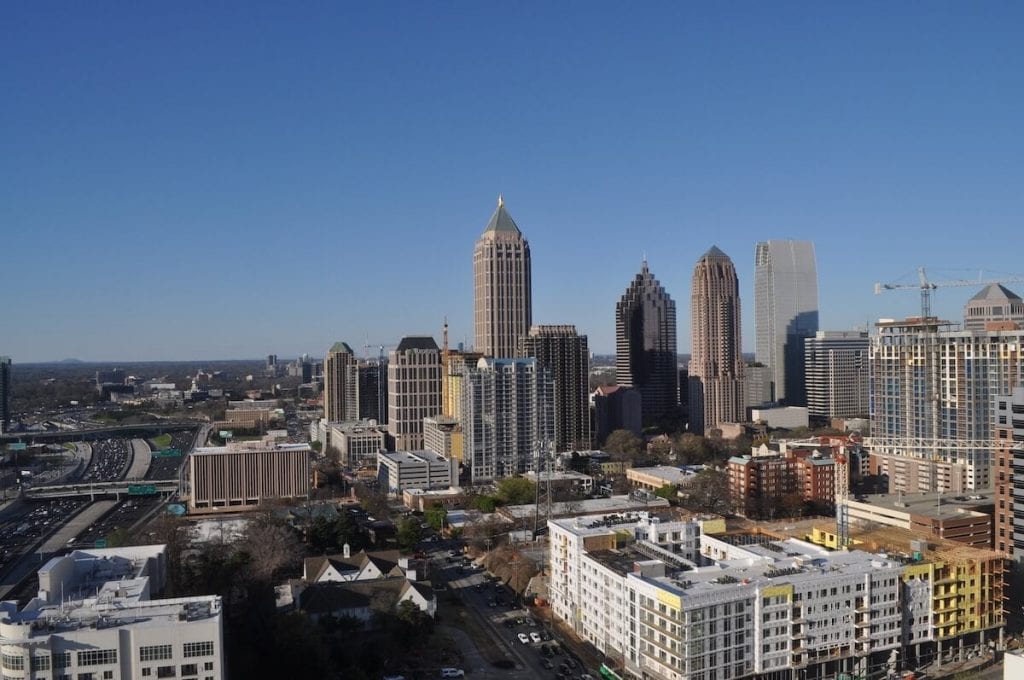 However, one need only stand at 11th Street and look north to see that Skyhouse Midtown and Atlantic House are identical buildings with different colors of concrete and different balustrades on the balconies.

And it gets worse.

Late last year, the Related Group started work on the last remaining corner at the intersection — Apogee Midtown. Their plans, for the tallest building in Atlanta since the recession, completely abandoned the vision set by Johnson. Ironically, the tower is also a Smallwood, Reynolds, Stewart, Stewart project.

More than simply neglecting its neighbors, the building features a towering parking deck prominently on the corner of the site, but it provides a blank façade to two of the most visible thoroughfares in the area.

The fact that a Hense mural will cover the parking deck is little consolation — architects should take responsibility for their buildings without relying on an application of paint to mitigate poor design decisions.

Johnson would likely not be happy with the building rising catty-corner from his now. And that is a shame.