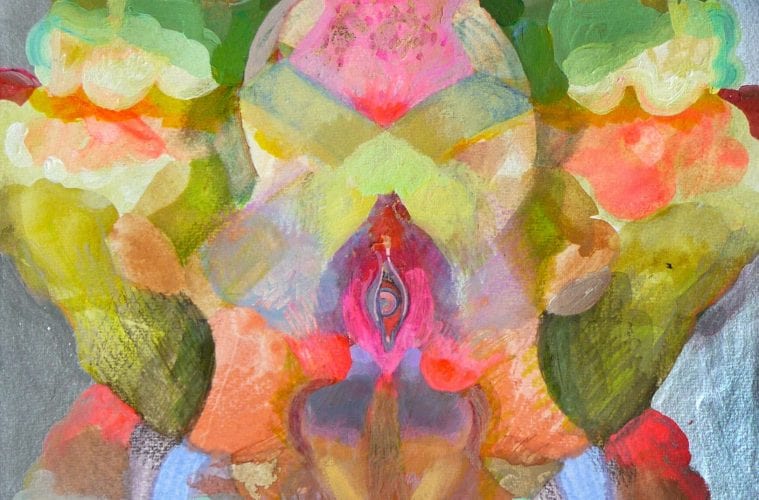 The paintings in Zuzka Vaclavik’s Thirst, at {Poem 88} through February 21, are the opposite of the “provisional painting” so recently popular. Each is definitively finished; it’s just that no two of them are finished according to quite the same set of rules.

Vaclavik is attracted to sensuously vivid color and explorations of the many ways of creating complex patterns from a few simple elements. That is one way of describing these works. It’s also a horrible way of describing works that evoke such instant responses of liking or not liking — a hardwired immediacy in our mental makeup that the clickable thumbs-up icon on Facebook has helped turn into a pathology. Despite their emotion-evoking qualities, or because of them, it’s important to look at what Vaclavik is doing in these paintings, which are serious visual explorations that stem, in many cases, from playful means and communicate playful emotions.

A few are asymmetrical, including two almost diametrically opposed approaches to botanicals. One small one, Unfurl, mixes abstraction with literal illustration of flower and leaf, while a larger one approaches an Art Nouveau fully rethought for our age of liquid modernity. Most, however, are symmetrical, and most are, in fact, part of a series titled Mandalas. Mandalas, by definition, consist of a symmetrical border arranged around some type of center, but the types of patterns or images in the border and center can vary wildly, and Carl Jung extracted psychological lessons from this. Using a remarkable range of visual strategies, Vaclavik does likewise.

The genuinely shocking range of Vaclavik’s aesthetic choices is illustrated by the juxtaposition of two similarly symmetrical paintings that are not part of the Mandalas series. Cascade, with its psychedelic spills of glittery silver letters, is as exuberant as Grayed-In is subdued, but both are successful paintings — even if they use opposite visual strategies to achieve success. On a compositional level, they share certain rules of arrangement, one reason they are hung side by side at {Poem 88}.

Likewise, the Mandalas share a few ground rules, but very few. One and only one features the central Buddha we associate with Asian mandalas. Another places a luna moth in that position. Most of them depend on very different, nonfigural relationships between margins and center. Some are purely abstract bursts of contrasting color. Others have what Vaclavik calls “objects radiating out of a central point,” sometimes reminiscent of a kaleidoscope’s mirror-image pattern of shifting shape and color.

A visual logic is at work in each painting, even if it is a visual logic that is very nearly opposite to the one at work in an adjacent piece. Looking closely at the things we like and don’t like about them, we become clearer about our own taste: why we prefer certain degrees of looseness or tightness in composition, why we like some visual rhythms more than others, why we respond to specific types of palettes more than others. I happen to like works held together by sinuous but defined lines more than works composed of complex balances of splashes of fluorescent color that, for me, hold unpleasant recollections of bad popular art with which they have nothing in common except palette. But Vaclavik’s exploration of her own unconscious, in the right circumstances, does valuable psychoanalytic work: pressed to explain why I don’t like something, I learn more about myself than I knew previously. That isn’t necessarily Vaclavik’s intent, but it’s a delightful side effect if you don’t stop with the vague emotional notion that this work is better than that one.

En route to going deeper, it helps to know that Vaclavik’s fondness for light-reflecting gold amid bright floods of color stems from her experience of several years spent in Cambodia, which left her with a respect for how seeming randomness can suddenly resolve into symmetry.

This body of work does not set out to be “important” in the sense of making us come face to face with the profound underpinnings of art making, but cumulatively it has far greater depth than is apparent at a casual glance. For all of that, if you don’t have fun with it, you’re also missing a major point.