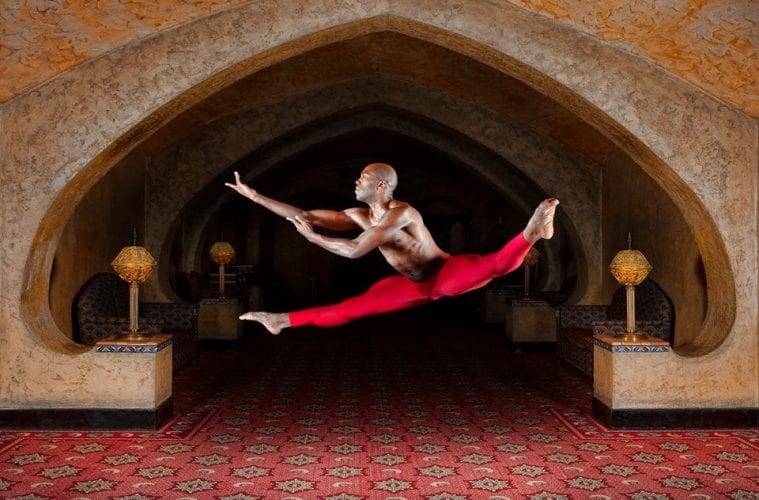 Review: Alvin Ailey’s sparkling Fox Theatre performances prove what is old can be new once again Battle, Ailey’s artistic director since 2011, delivered his curtain speech with casual ease and comedic flare. He had reason to beam. Recently, Battle met Barack Obama at the White House where he accepted the Presidential Medal of Freedom on Ailey’s behalf. The Medal of Freedom, the nation’s highest honor for a civilian, celebrates pioneering legacies and powerful efforts toward civil justice.

“Here at the birthplace of the civil rights movement,” Battle told the Fox audience, “we gather to celebrate Ailey’s triumphs with old friends and new.” The curtain closed on Battle and reopened to reveal statuesque dancers in place.

The concert began with Night Creature, Ailey’s homage to Duke Ellington’s music, and concluded with Revelations, a 10-part work recognized as Ailey’s masterpiece. Amid these perennial favorites were more obscure yet nonetheless intriguing dances by choreographers Jacqulyn Buglisi, Christopher Wheeldon and Battle himself. This opening-night concert offered material that spanned 54 years and fulfilled Battle’s desire to present historical and contemporary work side by side. Throughout, there was palpable enthusiasm for the sometimes bumpy, sometimes familiar but always electrically charged ride. The dancer’s tenacity and consistency excused the occasional misstep such as visible stage hands and a flubbed conclusion to Night Creature.

The Ailey dancers were characteristically charming and powerful, with effusive stage presence that permeated each piece regardless of content. Whether silly or serious, dramatic or sublime, the dancers played to the audience and visibly responded to shouts of approval. They worked to include the audience, and when they looked out, I felt seen.

While the overall programming was anything but nuanced, it was nuance that allowed for certain dancers to stand apart from others. Women such as Hope Boykin in Night Creature and Linda Celeste Sims in Wheeldon’s After the Rain Pas de Deux were captivating for their subtlety. Their performances sparked rare intellectual curiosity and revealed complex inner narratives.

Boykin and Sims brought substance and weight to dances that sometimes offered little more than traditional movement to beloved music. It was this same intrigue curated by the technically gifted Akua Noni Parker that elevated “Fix Me, Jesus” in Revelations to a place that felt less like a show-and-tell of demanding balances and more like a personal catharsis.

Ailey’s choreographic penchant relies on a close relationship with music, but not an intimate one. At times, it felt as though something was missing from Night Creature and Revelations. Night Creature, with its fleeting images of subway rides and salsa clubs, became schizophrenic with the addition of familiar narratives, classroom ballet exercises and an austerely held torso.

Surprisingly, the dancers looked uncomfortable and struggled with difficult material in the third movement. Similarly, when I saw a dancer lip-syncing to “Bosom of Abraham” at the end of Revelations, it illuminated the idea that perhaps the closing section needs live music, or even needs the voices of the dancers. Without it, we are left with something that looks a bit like show choir choreography and disregards the thoughtfulness of all that preceded. The most sensitive work of the night came from Jacqulyn Buglisi, an accomplished choreographer in her own right. Suspended Woman, set to a collage of music by Maurice Ravel, took its time to examine women from different decades. The women’s costumes were scaled-down period dresses, yet all four men wore the same gray suit. The dispassionate men drifted on and off stage, nominally affecting the women, and in turn heightening the women’s angst.

With an undertone of sorrow, the dancers felt more real, more connected to the content. The movement vocabulary took us away from obvious physicality and asked us to look deeper and more closely at small gestures, meaningful stares and understated duet material. Suspended Woman asked for space and delivered a quiet reflection. The question was clear: If women keep changing, why don’t men?

Robert Battle’s 1999 solo Takademe was created to an intricate score by Sheila Chandra. Danced by the gifted and wildly articulate Kirven Douthit-Boyd as the male soloist, Takademe asked no questions and shunned all depth or meaning. It reveled in the sheer power and strength of the soloist who brought visual reference to each Indian sound and double-tongued rhythm Chandra released from her mouth.

Using West African movement, hip-hop, classical Indian dance and frantic facial expressions, it was sometimes hard to tell what was more powerful: the movement or the lacey, elaborate and polyrhythmic music. Speed was the essence of the work and seeing the interplay between dancer and music generated a “what’s he going to do next?” vibe.

In notable contrast, Vernard J. Gilmore deserves credit for discreetly articulating the subtle movements in I Wanna Be Ready. Though the material is rooted in the Horton technique, Gilmore removed the classroom feel of the movement and allowed the piece to emanate from his guts. The tension-filled hand and arm that creeped from beneath his huddled body to the unearthly way he levitated to his feet and collapsed in startling slow motion was riveting.

Ailey concerts are often the equivalent of comfort food. Nothing daring, yet palatable all the same. Their exuberance is a reminder of how and why a young dancer gets hooked in a studio and is an easy doorway into the art form for a new dancegoer.

The challenge rests with Battle’s mission to keep the company fresh and current, though it’s clear the fans aren’t going anywhere. It’s like a Thanksgiving dinner. You have to be careful not to spice up the traditional recipes too much, yet still work to add a new dish once in a while, just to keep things interesting. I, for one, am looking forward to whatever is new.