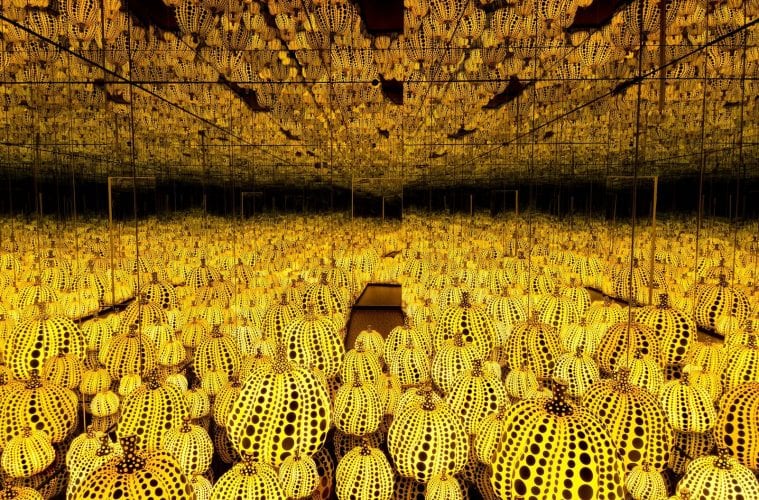 Review: Yayoi Kusama offers an intriguing glimpse into the infinite at the High

To enter these deceptively small chambers is to become part of a universe of endlessly multiplying objects, including your own body. The sense-rocking rooms have attracted thousands of visitors to Yayoi Kusama: Infinity Mirrors, the boffo touring exhibition now at the High Museum for its sold-out final stop. Yet, if the spectacle is all that viewers come away with, they have missed an opportunity to engage with work from throughout a remarkable artist’s career.

Kusama, 89, has expressed a lifetime of volatile emotions and wide-ranging ideas in a volcanic production of drawings, paintings, sculptures, installations, films, performances and literature. The years spent in the U.S., from 1957 to 1973, seem especially fertile. She was 28 when she left a sheltered life in her native Japan and came alone to New York, then roiling with cultural upheaval and political turmoil. She became involved with the downtown art scene, befriending and impressing many of the players.

During this period, Kusama’s work intersected with, absorbed and sometimes anticipated the art and culture of the era: minimalism’s repetition of forms (Donald Judd praised her work), pop’s use of everyday objects (Claes Oldenburg reportedly started making soft sculpture after seeing hers). She displayed a Warholian wiliness about branding and media, even hawking a clothing line at one point. She embraced hippiedom’s sexual politics and the anti-war movement. The concept of “self-obliteration” embodied in the Mirror Infinity Rooms aligns with psychedelic prophet Timothy Leary’s championing of loss of ego as a path to merge with the universe. She also struggled with her own demons. Having suffered since childhood from hallucinations, depression, phobias and suicidal thoughts, she has said that her compulsive art-making is a way of keeping psychological terrors at bay.

Kusama returned to Japan in 1973, where she has continued to mine and expand upon the themes and imagery she’d developed earlier. The exhibition comprises a sampling of major bodies of work.

Paintings: Semi-abstract works on paper from the ’50s introduce Kusama’s abiding obsessions, such as her signature dots and, most prominently, infinity. The amorphous compositions harden into more systematic repetition of shapes exemplified by the Infinity Net paintings of the ’60s, which are somber, hypnotic fields of tiny black dots peeping through circular white brushstrokes. The dots increase in dimension, scale and allusiveness, evident in the blood-red orbs in Accumulation of Stardust (2001).

Atlanta is the only venue to feature a series of small collages made in 1972, in which barely visible animals and flowers are woven into dense tapestries. Suffused with a mournful air, they were made as memorials to her friend, artist Joseph Cornell. The vibrant colors and loose, exuberant patterns of her most recent paintings, with titles like THE FAR END OF MY SORROW (2015) and My Heart Soaring in the Sunset (2013), project a joyful release from the darkness of her earlier work and perhaps her own psyche. Sculptures: Her sewn, stuffed pieces also suggest a spectrum of emotions. Chairs and other objects encrusted with phallic protuberances from the ’60s, all painted a metallic gray, convey a certain menace. They are, she has said, related to her fear of sex. Life (Repetitive Vision) (1998) is an installation of tendril-like shapes emerging from their platform like the tentacles of a monster out of a Japanese sci-fi film. In contrast, an installation of dot-dappled eccentrically shaped organic forms, created in tandem with the recent paintings, is a garden of delights.

Performance, happenings and films: Kusama orchestrated public events, seen here in photos and on film, that sometimes consisted of cavorting naked participants. They were part orgiastic free-for-all, part attention-getting provocation and part political statement. A series called Anatomical Explosions, for example, was her version of “make love, not war.”

Mirror Infinity Rooms: The seven rooms, positioned one per gallery, range from the comic to the cosmic. A disarming tone pervades Phalli’s Field (Floor Show) (1965, 2016), her first mirror room, in which she transforms formerly frightening phallic protuberances into a field of docile polka-dotted tubers. There’s the humor of the brightly lit field of polka-dotted pumpkins in All the Eternal Love I Have for the Pumpkins (2016), but there’s also the eerie Aftermath of Obliteration of Eternity (2009), a darkened chamber of flickering lanterns, which has been compared to Obon, the nocturnal festival of the dead in Japan in which lanterns are floated on the water.

This is rich and complicated territory. It’s too bad that the disjointed layout at the High, the logic of which is a mystery to me, makes it difficult to understand, and the wall texts, though informative, don’t provide enough context for visitors new to her work. For example, the first gallery displays Kusama’s most recent work, where cheer and color promote the expectation that a good time will be had by all. It’s jarring and confusing, then, to jump in the next gallery to more discomforting earlier work, the Infinity Net paintings and the phallus furniture from the ’60s.

The show’s popularity is another obstacle. In order to accommodate crowds, the museum limits visitors to 20 or 30 seconds in each of the mirror rooms, often after a long wait in line. That’s not enough time to take them in, let alone attain a state of “self-obliteration” that seems to be their goal.

In the absence of mirrored enlightenment, you can find wonder in the ubiquitous dot. Through variations in scale, color, density and context, the artist uses them to suggest gaiety or dread, corpuscles or constellations. They are the misshapen pumpkins, the giant pink balloons. Without beginning or end, like the mirror rooms, they are the perfect metaphor for infinity, the mark as elastic and expansive as Kusama’s vision itself.