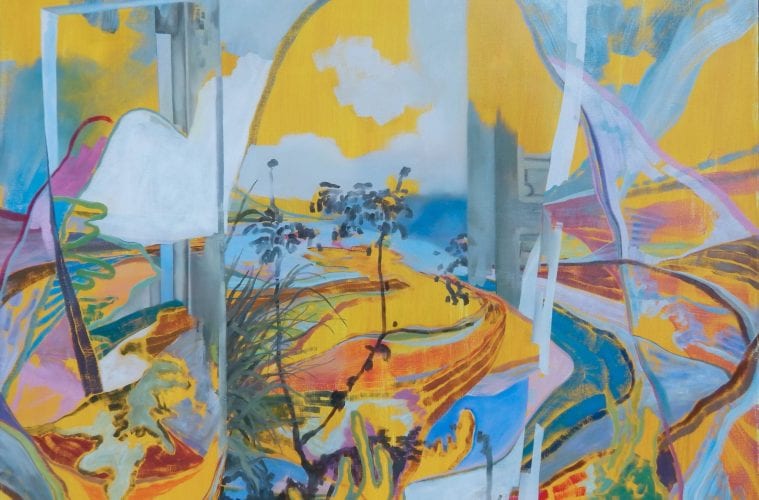 In Wihro Kim’s painting An Inlet, A New Place, the visually flattened surface of an abstract psychological landscape is cut through with shapes suggesting an illusory three-dimensional space. Kim’s abiding interest in depicting such paradoxical intersections between surfaces and images is gently but precisely explored in his exhibition Paintings on view at Poem 88 through June 23. By creating overlapping and adjoining visual planes, Kim opens depictions of space and surfaces in surreal, inventive ways.

In an installation last September at the Mammal Gallery, Kim arranged elements including paints, canvases, art books, magazines, empty water bottles and extinguished cigarettes to evoke the space of his studio. Crucially, the artificial studio included mirrors, which became visual inversions of the nearby canvases. Standing amid the objects and images in Nothing Lasts Forever, Until It Does — a title as self-consciously poetic as any Kim has given his recent paintings — the viewer was immersed within the artist’s characteristic web of references to architecture and the history of painting, and provided with a more concrete sense of the enfolding and expanding visual space his paintings depict. In many of the works currently on view at Poem 88, Kim’s preferred point of departure into further abstraction seems to have become the window. The trees and undulating hills shown in Mobile Entry Zone, while nothing new in terms of Kim’s speculative landscapes, are viewed through layers of red lines and shapes reminiscent of window screen. Thicker, more maroon lines outlining portions of the canvas tease a possible reference to Rothko. A rough, round shape cuts through these outlines and layered images to form a hazy porthole, like a gap worn through a window screen over time. Instead of being reflected, the image is approached directly, but the tree limbs and leaves depicted are glimpsed through the screen while also appearing to cast their shadows on it. Wihro Kim, Between an Object and a Hard Place, detail

The descending horizontal slats of window blinds appear to have inspired the composition of Between an Object and a Hard Place, a painting made with acrylic and watercolor on paper. Outlined with precision, these narrow bars show alternating colors and marks along each side of the painting and become columns flanking an open, undivided rectangular area in its center. Red lines resembling spray-painted graffiti form the shape of a cat, which appears to be stepping across from one column of horizontal bars to the other. Within the visual gap between these columns, the red lines indicating the cat’s body are folded into the fluid pastel landscape that recedes behind the outlined strips. Between an Object and a Hard Place reflects an increased sense of playfulness present in the new work at Poem 88. The cerebral and cool sensibility of Kim’s older work persists in Paintings but is newly animated by bright colors and humor, even moments of winking cuteness like this feline figure. If Between an Object and a Hard Place represents a new view of Kim’s playful side, the large painting New Life Here We Come reveals new horizons for his ambition. Taking the logic of overlapping visual frames and surreal, unfolding landscapes he developed on a smaller scale in other works, in New Life Kim unfurls countless rectangular shapes — walls, canvases or windows — in a vibrant panoply of color. These portals of varying sizes contain images of realistic elements including what appears to be a window frame and light switch, but are dominated by a circuitous, expressionistic landscape rendered in hues of yellow, blue and purple. Just below and to the left of the painting’s center, so subtly tucked between layers that you could miss it by looking too hastily, is a gray image of what appears to be the lower half of the artist’s face. True to its title, New Life Here We Come shows Kim extending his ambitions, but also loosening up, becoming a less inhibited and more energetic painter than ever before.

Wihro Kim: Paintings is on view at Poem 88 through Saturday, June 23, and the artist will give a closing talk at 2 p.m.