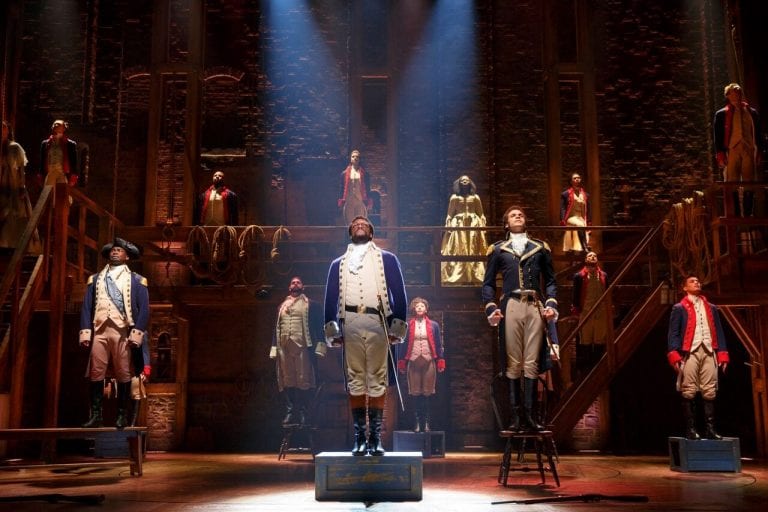 Hamilton is the hottest ticket in town for good reason; it works on just about every level. (Photos by Joan Marcus)

Review: In just about every way, Broadway icon “Hamilton” lives up to its reputation

Hamilton is everywhere just now, with good reason. Lin-Manuel Miranda’s masterpiece arrived in Atlanta this week (through June 10), a touring production joining Broadway and several cities where this musical juggernaut is greeted with sky-high ticket prices, sold-out performances and ecstatic audiences. Wednesday at the Fox Theatre was no different, and almost everyone seated near me seemed to have memorized the original cast recording. Judging from my own house, where the kids introduced the parents to Hamilton, I’d guess that some had also obsessed over YouTube clips, including an electrifying concert filmed, notably, at the Obama White House.

Hamilton is that kind of show. It speaks in the bold language of the street and with an attitude that’s nonchalantly cosmopolitan — you might even say “post-racial.”

When it first caught Broadway’s attention in 2015, Hamilton was hyped as the musical where the Founding Fathers were portrayed by men of color, dancing and rapping to a hip-hop beat. That turns out to be just one remarkable aspect. In Miranda’s view, American divisions of high/low, black/white and Anglo/immigrant are blurred or ignored altogether. Biggie Smalls, Shakespeare, Beyoncé, Gilbert & Sullivan, Grandmaster Flash (and a dozen more references I didn’t catch) all get a nod of literary and musical appreciation.

There are many layers. An ensemble of singing dancers is in almost constant motion, adding visual delight and often psychological depth. Andy Blankenbuehler’s choreography borrows from countless styles and is always super-charged and sexy (but never vulgar), at turns literal (thrusting a bayonet on the battlefield) or poetic (lifting furniture aloft and spinning slowly to depict the eye of a hurricane). Paul Tazewell’s costumes, tracking fashion from the Revolution onward, and David Korins’ humble set of brick and wooden scaffolding, like the insides of an old theater, allow the singing and dancing to hold our attention. In all, the musical is wise and clever and deeply sympathetic to human foibles. It’s also sensationally fun for anyone who doesn’t know what to expect, if such people exist. (Even politicians who thrive on anti-immigrant policies and cultural discord — here I’m thinking of Vice President Mike Pence — get tickets to Hamilton.)

The duel between Alexander Hamilton and Aaron Burr is the stuff of American legend. As playwright and composer, Lin-Manuel Miranda sketches the rise and fall of these men, and their inner world, in three full dimensions. Miranda himself played the original Hamilton on Broadway, as a sort of anti-hero — short, somewhat physically awkward and nasally in voice. The message was clear: If this outsider were going to win you over, it had to be through his tenacity and brilliance. In Atlanta, Austin Scott’s Hamilton comes with the natural gifts of a leading man: handsome, the tallest actor onstage, with a generous smile. His singing voice is warm and resonant, his diction precise. Scott is a star the moment he steps onstage.

That alters the balance our Hamilton must strike with his friend and nemesis Aaron Burr. On Broadway, Leslie Odom Jr.’s Burr would naturally expect all doors to open. Uncommonly suave and calm, Odom in character and voice was decidedly not an underdog — until the realization dawned that he’d been outmaneuvered at every turn. These subtle shifts are, gosh, Shakespearean in their emotional power. But Nicholas Christopher’s Burr, in Atlanta, never for a moment can feel he’s got the upper hand in the relationship, which makes Burr’s descent toward murderous revenge more two-dimensional. Instead, Christopher comes off as a touch insecure, not calm but a bit prissy, playing up elements of snide humor, even as his expressive face (those eyebrows!) show a man constantly calculating his place in the hierarchy. A ballad like “Dear Theodosia,” where Burr and Hamilton sing of love for their newborn children — and hope for their newly independent nation — is just lovely, so tender and affecting.

For the audience, the tricky thing about knowing an original cast album is that you can’t quite imagine other interpretations. At the Fox, the cast is uniformly strong, although some members — especially the men in Act I — don’t easily navigate Miranda’s precision-tooled writing. At the start, the “young, scrappy and hungry” gang of ambitious revolutionaries dodge and weave and rap their lines, and Miranda has them compress too many syllables in too tight a space. Most Broadway-trained performers can sing jazzy or beautiful long lines but contrapuntal rapping is, well, an art unto itself. At its best (again, like in Shakespeare) the wordiness and speed of delivery is essential to the energy level of these young men. But Miranda also has the Marquis de Lafayette speak with a hammy French accent, for example, which Chris De’Sean Lee mumbles as he tries to articulate his lines while making it something more than a gag. It’s a tough role to inhabit.

Yet in Act II, Lee comes to life as Thomas Jefferson, and he makes the character his own — sashaying across the stage, cocky and brilliant in a long red velvet coat. His epic rap battles against Hamilton, arguing about the federal government assuming states’ debts, or sending aid to France, are unlikely highlights of the show. Rubén J. Carbajal is a little unsteady as anti-slavery revolutionary Laurens in Act I but ideally cast in Act II as Hamilton’s son Philip, a wide-eyed youth brimming (tragically) with his father’s baggage.

As the towering figure of George Washington, Carvens Lissaint is physically imposing as the father of his country, and sings the soul-stirring “One Last Time” matter-of-factly, a soldier till the end. The batty King George III is a special part, designed to steal the show, and Peter Matthew Smith has all the camp flair and most of the required vocal acrobatics.

But it’s the women, the three Schuyler sisters — Julia K. Harriman as Hamilton’s wife, Eliza, Sabrina Sloan as Angelica and Isa Briones as Peggy (and, later, as Hamilton’s mistress) — who are on point, vocally gorgeous, emotionally intense and effortlessly elegant. A high-energy, full-cast number like “Satisfied” has it all, where Sloan’s self-aware Angelica runs through her actions and regrets, played out like a lucid dream. So true to life.

The show is also profoundly, beautifully sewn together: charming bits heard early on come back with devastating force later in the evening, as Hamilton’s life unravels. One example serves for the others: Harriman’s Eliza counting in French with her nine-year-old son and, years later, counting again with him on his deathbed, till the moment he expires, is heart-wrenching. It’s a reminder that talented singers will perform and eventually be replaced, but the real genius in the room is Lin-Manuel Miranda.