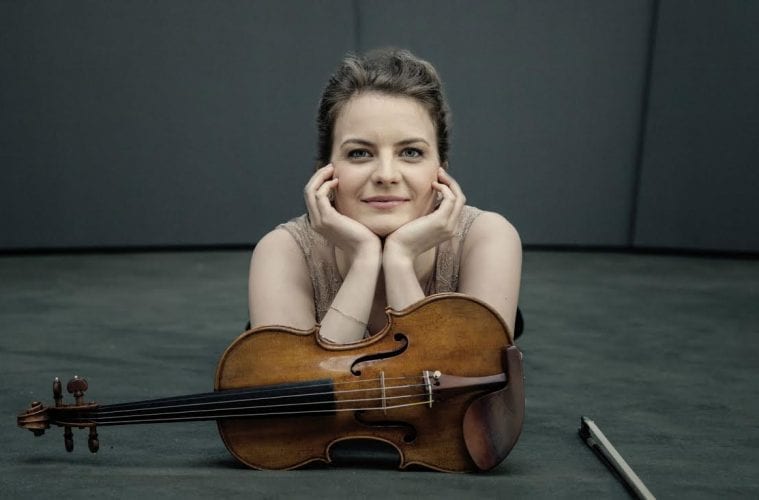 Violinist Veronika Eberle was totally on fire in her debut appearance with the Atlanta Symphony Orchestra Thursday night, wowing the audience with her superb performance of the Violin Concerto of Johannes Brahms. It was the unquestionable apex of the concert, which also included Beethoven’s Symphony No. 8 and the first ASO performance of the String Sonata No. 1 of Gioachino Rossini.

Frequent guest conductor Roberto Abbado led the ASO in the concert at Symphony Hall, which will be repeated on Saturday.

Rossini’s String Sonata No. 1, the first of six such pieces of juvenilia that were written around 1804 when the composer was 12 years old, were originally for a quartet of two violins, cello and contrabass, but have all been arranged for string orchestra — the form in which it was heard Thursday.

Opening the concert and using only a modest complement of the orchestra’s string sections, it demonstrated the preteen Rossini’s prodigal capability with the classical style exemplified by Haydn and Mozart, but one of only rather average import were he judged as an adult. It’s the kind of curiosity historicists love, and pleasant enough as a light appetizer.

No worry for the reputation of the young Rossini, as only a decade later he would become the hot name in Italian opera. One wonders, then, if a curtain-raising Rossini overture might have been a stronger choice in advance of the Beethoven, even if it shortened the concert’s first half by a few minutes.

Roberto Abbado last appeared as guest conductor with the ASO in February, at the helm of a concert that notably featured his edition of Mozart’s Requiem, with the ASO Chorus, plus a finely honed rendering of Beethoven’s Piano Concerto No. 1 with pianist Jorge Federico Osorio. This performance of Beethoven’s Symphony No. 8 didn’t quite push the meter up to that level.

The last of the “even numbered” symphonies of Beethoven, which have unjustifiably been tagged as the “lesser” of the nine, the Symphony No. 8 is a buoyant work that the composer fondly referred to as “my little Symphony in F” to distinguish it from his longer Symphony No. 6 in the same key.

Relatively lighthearted and cheerful in character for Beethoven, it is still a serious work. But in this particular performance, Abbado couldn’t seem to find its groove in terms of tempo, particularly in the last movement, where it seemed to need more space to breathe. Finding the right pace, more than anything, is the result of the conductor’s guidance.

The somewhat unconvincing pacing throughout didn’t quite hit the ASO’s usual bulls-eye with Beethoven. That mark would come with the Brahms concerto to follow in the second half.

Veronika Eberle, who first gained international attention at age 16 when she performed Beethoven’s Violin Concerto at the 2006 Salzburg Easter Festival with Sir Simon Rattle and the Berliner Philharmoniker, performed Brahms’ challenging, gypsy-inspired concerto with verve and passion. She was in full command of the full-voiced but sweet-toned 1700 “Dragonetti” Stradivarius — her excellent concert axe, on loan to her from the Nippon Music Foundation — an instrument that suits her playing well.

A native of the small Bavarian city of Donauwörth, Germany, Eberle turns 30 late next month. She is an artist worth keeping on your radar.