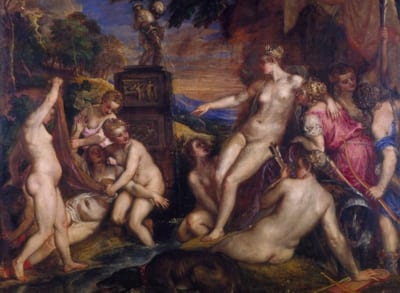 Review: Titian and Venetian painters revel in sensuality, color and female flesh, at the High Museum

Contemporary art loves to play with cultural taboos, but it can be puritanical — suspicious of beauty, contemptuous of pleasure, politically correct. The High Museum of Art’s “Titian and the Golden Age of Venetian Painting,” the first exhibition in a multi-year collaboration with the National Museums of Scotland, is the 16th-century antidote. Titian, Tintoretto, Veronese and their peers were unabashed sensualists, reveling in vibrant color, pageantry, the glories of oil painting and acres of female flesh.

Chalk it up to geography. As I wrote in the AJC, the port city-state of Venice was a crossroads for ideas as well as goods: “Venetian artists, for instance, were more aware of developments in the art of northern Europe. They were early adopters of the oil medium, which facilitated their efforts with color, light and translucence. The airy bluish landscapes in the backgrounds of many paintings also suggest the influence of early Netherlandish painting.”

A stable republic, Venice enjoyed a relatively broad base of wealth, which increased the market for paintings for private religious devotion — and private pleasures. Despite their veneer of mythological subject matter, Titian’s paintings “Diana and Actaeon” and “Diana and Callisto” (below) were, albeit beautifully painted, Renaissance pin-ups. Titian and his peers often dispensed with the veil of story altogether. In Veronese’s great painting “Mars, Venus and Cupid” (left), the god is disrobing the goddess, who is distracted by Cupid and a pup. Artists such as Paris Bordone made a specialty of images of courtesans, who stare frankly at the viewer-voyeur.

Jacopo Bassano’s “The Adoration of the Kings” (below) exemplifies the taste for high drama and pageantry. Here the Holy Family takes a back seat to the tumult of the magis’ retinue — the shimmering fabrics of the costumes, the prancing horses and, oddly, the well-rounded buttocks of a man in the foreground. These images hardly raise eyebrows in the 21st century; it’s the virtuoso painting that stands out. It’s easy to see why the Venetian style has a long line of heirs, from El Greco and Rubens down to contemporary British artist Lucien Freud.

Yet 16th-century artists in Rome and Florence harrumphed about the Venetians’ lack of design and their anatomical mistakes. In our own time, feminists of the 1970s would have held up these paintings as epitomes of male chauvinism.

At this point, both observations are less damning than amusing. This is a show to see.