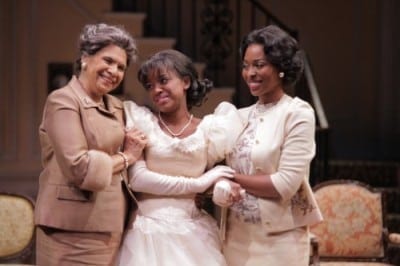 If there were any doubts about Pearl Cleage’s ability to create a comedy out of the more harrowing moments of the civil rights movement of the 1960s, you wouldn’t know it from the audience that guffawed its way through “The Nacirema Society Requests Your Presence at a Celebration of Their First Hundred Years” in its world-premiere production at the Alliance Theatre. The play runs through November 14.

Not that Cleage has too many doubters. The acclaimed playwright and novelist has carved a niche for herself in Atlanta and beyond for such socially relevant works as “Bourbon at the Border,” “Blues for an Alabama Sky” and “Flyin’ West.” She has earned a reputation as someone who can humanize the African-American experience as much as politicize it, and it’s the inherent humanity of “The Nacirema Society” that, under the direction of Susan Booth, allows her to shift from drama to comedy with ease. While I’m depressingly new to Cleage, one of the things that struck me in her other play I’ve seen, “Blues for an Alabama Sky” (remounted at True Colors a while back), is how clever, witty and sharp her dialogue is. Her characters’ conversations can often come off as verbal swordplay, which suits the comedy genre perfectly. This allows her to make great fun out of the highest of Montgomery’s black society as it prepares for the 100th-anniversary celebration of its cotillion — even as the Dr. King-led march to Selma looms on the horizon. Indeed, the movement does very little more than loom in this play as Cleage works hard — maybe too hard — to keep the laughs coming and the history lessons light.

She gives us the Dunbar family and its satellite characters, led by the matriarch Grace Dunbar (Trazana Beverley), who’s fretting over the debut of her granddaughter, Gracie (Naima Carter Russell). More annoyed with than inspired by the movement, Grace seems more blueblood than black woman; half the audience laughs and the rest gasps when she declares of her fellow members of the elite: “There are black folks, and there are while folks. And then there is us — the best of both worlds.” And the famous Montgomery bus boycott, 10 years earlier? “I’ve never sat on a city bus in my life!”

She has plans for Gracie: graduate from high school, get engaged to the son of her longtime crony Catherine (Andrea Frye), attend Fisk University like all the other Dunbars, and return to a comfortable life among the well-to-do. Gracie, of course, has other plans and wants to go to school in New York City and become a starving writer. Even her intended beau has other plans. Bobby Green (Kevin Alan Daniels) loves Gracie only like a sister (the feeling is mutual), instead mooning over a middle-class Montgomery girl named Lillie (Karan Kendrick). Lillie’s mother, Alpha (Tonia Jackson), has plans of her own — for her daughter and for the Dunbar family. Then there’s the New York Times reporter (Jasmine Guy) who has ripped the high-society Dunbars in one article and appears ready to do it again, on the eve of the cotillion, if people don’t start telling her the truth.

All these clashing agendas are what make “The Nacirema Society” feel more like a British comedy of manners than the romantic comedy that’s being promoted to audiences — Noel Coward with soul, if you will. Grace is perpetually at war with her willful granddaughter and the civil rights protests that she fears will overshadow her treasured cotillion. But really, Grace is at war with change, whose agenda almost always, if belatedly, wins. She just won’t go down without a fight.

And Trazana Beverley is a heavyweight. Her scheming with, and exasperation with, her best friend Catherine provides “The Nacirema Society’s” most hilarious moments. That’s mainly because neither plays straight man for the other; it’s almost like “Costello and Costello” or “Lewis and Lewis.” Beverley’s a stage veteran, a Tony Award winner from back in the 1970s, and you feel the depth of her experience in the way she works Cleage’s script, the stage and the other characters. Andrea Frye is her perfect foil as Catherine, as clueless as Grace is cunning, but just as snobby, and by the end the audience does kind of hope they’ll wind up being related by marriage one way or the other. Aside from Russell as Gracie and, to a lesser degree, Jackson as Alpha, the rest of the supporting cast isn’t quite as sharp. Cleage’s intricate writing — with its rapid-fire exchanges and heated monologues — takes a real pro to grasp, and on this night not everyone seemed as sure of their lines as the leads. Hopefully that will come with time. But Guy’s character seems so thinly written and her presence so contrived that you wonder why one of Atlanta’s best-known actresses took the part, beyond being a team player.

“The Nacirema Society” seems significantly light on male presence. All the fathers and grandfathers are long gone. Bobby Green is the only male character on stage, and I wonder if Cleage is trying to say something about the strength of women in the 1960s. It just feels awkward that at a time of great black heroes, the only one present is lovestruck. Grace’s late husband, Dr. Dunbar, looms over the proceedings because of what may have been a past indiscretion.

I didn’t think about it too long. I was too busy laughing. And that, I suppose, might be Cleage’s most important point.