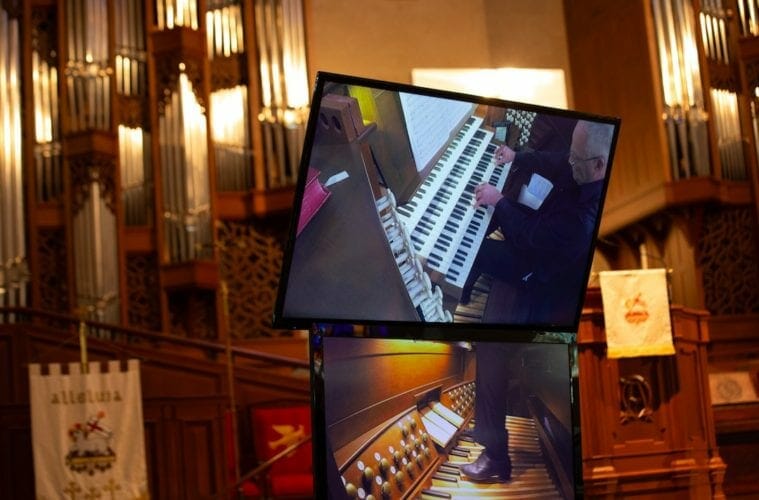 Scott Atchison returned to the classical tradition of improvisation in Wednesday's concert, part of the in-person and streaming “Wondrous Machine series, which concludes next week. (Photo courtesy of Peachtree Road United Methodist Church)

After more than a year away from indoor concerts — my last was Spivey Hall in March 2020 — the super-saturated sonic balm of a pipe organ seems like a fitting return. All this month, Peachtree Road United Methodist Church in Buckhead has offered a series called “The Wondrous Machine,” where the star of the show is the mighty 160-stop Mander organ. Free admission, short concerts, compelling repertoire, an enormous sanctuary, a (hopefully) vaccinated audience — what could be better at 1 p.m. on a Wednesday?

Two performers shared this week’s program (which will be streamed on the church’s website). Scott Atchison has been Peachtree Road’s music director and chief organist for three decades. Oliver Brett, a British organist with a burgeoning international career, is the church’s associate organist and choirmaster. He took the post in 2019, so he’s just getting started.

The Great Organ of Peachtree Road, built in 2002 by the prestigious British firm Mander Organs, is tailored to the colorful, lush and loud French romantic repertoire. Atchison and Brett played to these abundant strengths.

The afternoon opened with Atchison at the console and Jean Langlais’ Hymne d’action de grâce ‘Te Deum under his fingers and feet. (A helpful video screen lets the audience see the organists at work.)

Langlais, blind since childhood, was an essential organist in the Paris church scene until his 1991 death. He studied French musical traditions — derived from Gregorian chant and old church modes — from two great musicians who were themselves blind, Albert Mahaut and Andre Marchal. In 1955, Langlais recorded his six-minute Te Deum (from a set of “Three Gregorian Paraphrases”) and made it sound eccentric and mystical, breathing the same air as another great Parisian organist-composer, Olivier Messiaen. On Wednesday, Atchison played it straight and deliberate — more Anglican, perhaps — which made the music all the more clear, linear and dramatic. 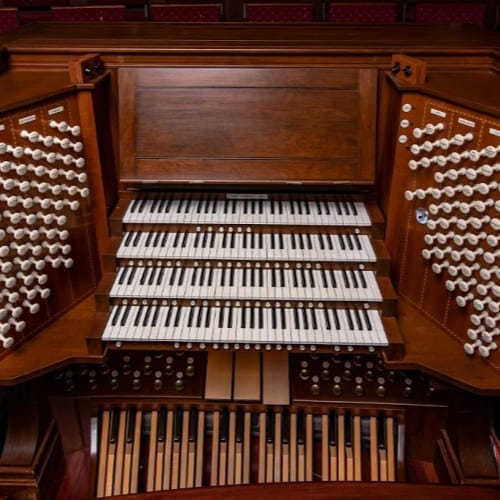 The Great Organ of Peachtree Road was built in 2002 by Mander Organs.

Time was, like 200 years ago, all European-style classical musicians  improvised. You played an instrument, you composed music, you improvised. Your teachers did this, and so did their teachers. By the end of the 19th century, however, formalized programs and technical skill took precedence. Orchestral musicians no longer needed the ability to create music on the spot, and were instead rewarded for how perfectly they could read notes off the printed page.

Yet church organists, playing a wide range of music and needing to vamp to fill time during services, continued to hone their improvisation skills. As recitalists, good organists can take a submitted theme, hatch a plan and make it thrilling — all on the fly.

Atchison was given three songs from The Sound of Music, which were placed on a card. He studied the assignment for a moment, then launched into a brooding, lengthy introduction, covering the scope of the instrument, till we eventually heard the first snippet of “Climb Ev’ry Mountain.”

After this brief peak, we seemed to descend to Hades and climb back up for the musical’s iconic main melody (with the lyric “the hills are alive”) played almost as a verdant springtime folk tune — a delightful bit of aural scene painting. The fluffy, white clouds overhead soon grew dark and stormy, and “My Favorite Things” came out as a grotesque Gothic paraphrase. A smiling Julie Andrews was nowhere in sight. One of my favorite things is the visceral power of a pipe organ at full thunder, filling the room to sonic overload, under the control of a brilliant improviser.

It was then Oliver Brett’s turn at the console. Belgian composer Joseph Jongen isn’t a name known beyond organist circles, but his Sonata Eroïca, from 1930, is a rare masterpiece — extravagantly colorful, tender and heroic — but also at times as impressionistically hazy as Monet’s water lilies. It’s gorgeous. It’s scary. It’s irresistible.

Before starting, Brett gave us a few listening points: the menacing chord progressions of the opening, the lovely 11-measure theme and its two variations and so on, all the way to the closing fugue, lifting the spirit to the heavens. Brett, a real gem for the city, made Peachtree Road’s Great Organ sing and thunder and speak with depth, touching on real profundity.

He’s a bit of a showman, perhaps of an austere British fashion: His red-striped socks accentuated his fancy footwork.

The in-person audience wasn’t large — maybe 25 souls — but we cheered mightily. People catching the livestream on their laptops heard all the music and watched Atchison and Brett in action, but that is what’s been missing across this pandemic year: the awesome, inescapable, soul-enriching connection of being in the same space as the musicians and the sounds they make. Nothing can compare.

Guest organist Kirk Rich from All Saints’ Episcopal Church plays the series’ final recital at Peachtree Road at 1 p.m. next Wednesday (May 26).