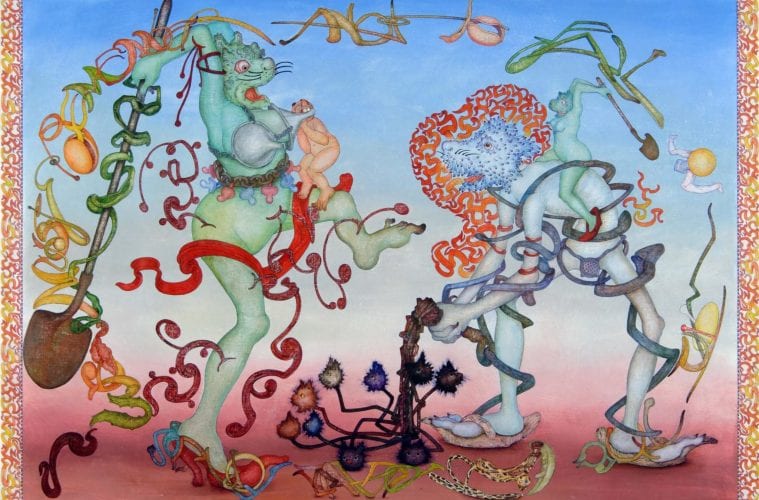 Review: “The Garden of Unearthly Delights” rises to the occasion with love, humor and creativity Forget Dali’s melting timepiece, the mystery of Mona Lisa’s smile or even the grotesque omnisexuality of Ryan Trecartin’s videos. There is no work in the history of art more intriguing, strange and confounding than Hieronymus Bosch’s “The Garden of Earthly Delights.”

On its face, the 15th-century Flemish master’s altarpiece offers traditional biblical narratives: the left panel depicts Adam and Eve in the Garden of Eden, the right describes the Last Judgment. The central panel is a puzzle. It depicts into a vast and detailed landscape in which strange hybrid creatures roam, strawberries are the size of boulders and naked humans engage in an oddly asexual orgy of often acrobatic encounters. And, when the flanking panels are examined closely, they proffer their own weirdness, from the sci-fi architecture to the bizarre punishments meted to the damned. (You can explore the painting in detail here.)

What little historical evidence exists suggests that Bosch was a pious man. He was a member of the elite Brotherhood of Our Lady, and sustained a highly successful career turning out conventional religious paintings. But the polymorphous perversity of the central panel and the pleasure he seems to take in imagining unusual tortures for the damned are such that anyone who ascribes to Freud’s theory of the subconscious will figure he didn’t know he was really thinking.

ArtsATL critic Jerry Cullum made a pilgrimage this summer to Bosch’s hometown to see one of the exhibitions mounted to honor the 500th anniversary of his death. The experience inspired him to organize “The Garden of Unearthly Delights: Hieronymus Bosch in the 21st Century,” on view at Whitespace through September 3. Most of the 28 contributors Cullum solicited made work especially for the exhibit, a testament, in part, to artists’enduring fascination with and affection for the work. Those represented by preexisting pieces — among them, Jim Barsness (an Athens painter we see far too little of) and Joe Tsambiras — seem, on consideration, to be Bosch avatars. Manifesting the imagination and craftsmanship that characterize the honoree’s oeuvre, the bounty of paintings, drawings, prints, photos, sculptures, video, performance and conceptual art is, indeed, a garden of delights.

Cullum has situated the exhibition “somewhere between a deeply felt experiment, a pointedly purposeful prank, and a sincere homage to one of the most paradoxical artists in history.” “Desert of Everything Fluid of Passions,” Julianne Trew’s homage, is a startlingly true abstract interpretation of the whole triptych executed in her personal language — a turmoil of eddying brushstrokes painted in grisaille (blacks and whites). More often, the artists reinterpret specific imagery in contemporary media and styles. The photos in Rose Barron’s “Ethereal Earthly Delights,” rendered in stop-motion by Sandee M. Chamberlain, are compositions of naked bodies that mimic the strange entanglements found the paintings. Bosch seemed to have a thing for creamy white and occasionally ebony buttocks. One notable image is a crouched figure, whose upraised tush is either sprouting flowers or serving as a vase for some. A sculptural version of that figure is the centerpiece of a ring-around-the-rosy of grotesque little heads in Ben Goldman’s comic table-top tableau, “Amerikaan Garden of Delights.” The creatures’ open mouths are stuffed with fruits found in the father painting, and the effect of their fey-flowered hats is akin to putting lipstick on a pig. (Speaking of which, love the nose ring on one little porker.)

Artists taking a more metaphorical approach include Elyse Defoor, whose photograph “Pit” is a close-up tangle of belts that evoke the S&M vibe of Bosch’s Hell. In E. K. Huckaby’s metaphysical sculpture “Scrutiny,” creature-like microscopes, stethoscopes and the like have fixed their attention on a multicolored glass orb. The composition suggests Bosch’s image of pre-Genesis earth on the front of the altarpiece, a hermetic poem about conception and perception.

One glaring absence amid these “sincere homages” is a serious response to Bosch’s religious themes. Even when John Beadle (in remarkable ceramic sculptures that are crags of suffering faces) and Paige Prier (in ghostly abstracted watercolors) evoke Bosch’s “Last Judgment” in their vertical compositions and compression of figures, their works seem sympathetic rather than damning. That most participants were drawn to the psychosexual and the fantastical aspects of the work is not surprising. Ours is an art world that delights in the transgressive, is obsessed with the sexual and limits its moralizing to the political. Charlie Watts’ photo piece, “Pesca Della Madonna i, ii and iii,” is a particularly telling example. In two of the five sections, she transforms Bosch’s recurrent image of a naked person with an outsize fish into centerfolds. Framed like panels in an altarpiece, the voluptuous female nudes fondle the fish and stare brazenly at the viewer. The fact that her people are “real” (as in photographed rather than painted) helps to render these images more erotic and more repulsive than they are in the original. (Why does Kim Kardashian come to mind?)

Finally, what would a “21st-century response” to Bosch be without a critique of consumer culture? That slot is good-naturedly filled by Patty Nelson Merrifield’s “Exit Through the Gift Shoppe: Gifts of Earthly Delights.” (The title is a nod to graffiti artist Banksy’s eponymous documentary film.) Set against the backdrop of an “Earthly Delights” shower curtain are shelves of figurines, sold on the Internet, that replicate some of Bosch’s more bizarre combinations of bodies and creatures. Also for sale are real fragrances, “Les Fleurs de Bosch” and “L’Huile de Bosch,” created by Pat Borow and Lisa Tuttle.

Kudos to Cullum for envisioning this exhibition and to the artists for rising to the occasion with love, humor and creativity. As was the case in Bosch’s garden, a good time was had by all.