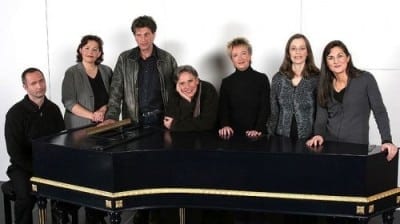 The Dorian Consort, a superb seven-member chamber group founded in Switzerland, stopped in Atlanta over the weekend. They were making their way to a flute convention in Charlotte, North Carolina. In two free concerts, the septet assembled smart programs and played to their strengths: each performance was bookended by Bach, with prominent Swiss composers in the middle.

The Dorians played Bach’s Suite No. 2 in B minor — the one that ends with the “Badinerie,” with its famous flute solo — as a refreshing set of dances, each movement paced to excite the body. It was music in constant, joyous motion.

They stretched and layered the suite’s “Sarabande” movement almost to the point of sonic saturation; Eva Amsler skipped along merrily in the flute-powered finale. It really flew. By sounding a little more French Baroque than German Romantic, they captured an ideal spirit.

They brought the same combination of lightness, danceability and depth to Bach’s “Brandenburg” Concerto No. 5 — the one with the long harpsichord cadenza — where Shalev Ad-El cut loose at the keyboard, making the solo both wild and substantive, a stand-alone fantasia.

Despite the harpsichord and a special fluency in Bach, the Dorians are not a period-instrument ensemble. Amsler plays both a wooden flute and, for 20th-century repertoire, its metal descendant. The string players use a combination of (modern) metal-wound strings and (historically styled) gut. Their sound in Bach is clear and vibrant and (mostly) vibrato-free.

Switzerland’s list of major 20th-century composers isn’t vast: Frank Martin and Arthur Honegger are almost alone at the summit. Both were born in the last decade of the 19th century, and both gravitated toward Parisian musical styles or revived folk tunes from the Suisse Romande (French-speaking Switzerland). Yet both were fundamentally pan-European composers: listening to their music, it’s not immediately apparent where they’re from. A concert that balanced their music with another composer of more or less pan-European sensibilities, Bach, invited the listener to consider nationalism from a sensible, low-temperature perspective.

In Martin’s “Pavane Couleurs du Temps,” from 1920, the five string instruments passed around the lyrical tunes. I especially loved cellist David Inniger’s rich, red-wine tone. The group’s non-Romantic approach gave the music a gentle and timeless feel. The music doesn’t frolic in a pasture in the majestic Swiss Alps, but instead perhaps in the hilly, perfumed Alpilles of Provence.

Amsler, a Swiss native who teaches at Florida State University, offered Honneger’s “Danse de la Chèvre,” a lovely neo-classical flute solo with a modernist twist, as if a shepherd dreams of a bustling, disorienting city. The melancholy ending, tapered down to a whisper, held a little world of emotion.

The odd composer out, in many ways, was Edu Haubensak, an atonal modernist born in 1954. His music, like the others, was in a pan-Euro style — what was in vogue across the continent from after the Second World War until a decade or two ago.

Haubensak’s 12-minute “Tones,” from 1997, was inert and almost still, just wisps of abstract sound, sometimes abrasive, sometimes as warmly bitter as cigar smoke. The score is in graphic notation, and the individual musicians determine much of the outcome. It unfolded very slowly: inarticulate yet intense.

On a concert program that featured perspectives on dance and the pastoral countryside, “Tones” was entirely inanimate and urban, a musical parallel to postwar concrete architecture. In the context of Saturday’s concert, so different from everything else, this bracing work enriched the evening.