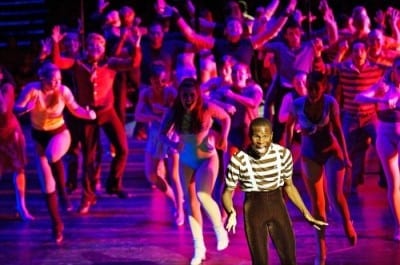 It was bound to happen. It was meant to be. Aurora Theatre — the Lawrenceville playhouse that has much to offer but sometimes comes up a little lacking in the Broadway musical department — has delivered a knockout song-and-dance spectacle. It’s Michael Bennett’s 1975 masterpiece, “A Chorus Line,” and there is nothing shabby about it.

I would even go so far as to say it’s the best musical in Aurora’s history — except that I didn’t catch “Singin’ in the Rain,” the 2010 season opener, which by all accounts made quite a splash. I see in the program, though, that Anne Towns is the director behind both ventures, so I have to believe she has something to do with the magic. Inaugurating Aurora’s 16th season and running through September 4, “A Chorus Line” is a revelation of how a small, savvy and determined theater can produce a grand-scale musical that gets nearly everything right.

A big show that requires its movers to stretch their muscles, its actors to dig deep into their souls and its singers to situate their phrases nimbly around frenetic kicks and leaps and narrative montages, “A Chorus Line” is about a group of dancers desperate to get hired. Arriving at the cusp of “the ‘Me’ Decade” and based on the original company’s real-life stories, it pushed buttons about ageism and objectification (a fancy word for “tits and ass”) and about sexual discovery and relationships. It somehow crystallized that famous period of rebellion, in the 1960s and early ’70s, against power structures, parents and the status quo.

Picking every wound he can find and playing psychotherapist is choreographer-director Zach (played by Anthony Rodriguez), who will ultimately confront some of his own personal baggage in the form of a washed-up dancer wearing a wisp of a red dress (Pamela Gold as Cassie). Rodriguez, the Aurora’s producing artistic director, is newly slimmed up here; he also feels newly minted as a performer, and is very good as the jerk who may in fact have a tiny speck of decency left in his tight-fisted little heart. But the essence of “A Chorus Line” is in the lineup, in the imperfections and vulnerabilities of the harried and perspiring troupers who put their souls out on a limb every night, waiting for the buzz saw and the adoration. It’s a terrible way to make a living, and yet it’s the only way to make a living. This is what they do for love.

If you want to be a Zach, you can easily find the weak links in this 25-member company. But life is always bumpy and lumpy and out of key, poised for awkwardness and unintentional laughs. It is also about finding courage and bravery in moments of humiliation and defeat. “A Chorus Line” is about glimmers of tenderness in a cutthroat world. Good audiences know that. And so do good directors. Towns chooses to emphasize her performers’ strengths. Anthony Owen (as Bobby Mills) has brilliant attitude, wearing his character’s dismissiveness like a badge of honor. Courtney Godwin (as Val Clark) has raw energy and charisma and captures the determination of a person who refuses to be rendered invisible (“Dance: 10; Looks: 3”). Marissa Druzbanski packs sassy punch as Diana Morales, who feels absolutely “Nothing” in her improvisation classes and dares to call out her teacher on the BS. Greg Kamp (Mark Anthony) is lovely as the clueless chap who is disabused of his naivete in the confession booth and seems somehow exhilarated that it wasn’t gonorrhea after all. I could go on and on. Let’s just say that this company consistently exudes vitality and spunk, clarity and truth.

Gold’s solo (at left) is a tour de force, anguish and tension uncoiled in a swirl of passion and desire. She burrows right down to Cassie’s soul. David Rossetti is gifted beyond the sum of his dancing-singing-acting components. He finds grace and poignance in a sense of quiet and reserve, and his Paul San Marco will bring tears to your eyes.

I have always loved the way Marvin Hamlisch’s score packs what sound like breakthrough moments of a disco heart (“The Music and the Mirror”); it’s so ’70s and electric and woozy. Music Director Ann-Carol Pence and her eight-piece band dig it too, virtually dancing with the groovy vibes, the lilting romance, the brassy locomotion of the music. No scrimping and saving on this orchestra. Jen MacQueen’s choreography is wonderfully executed by this young and energetic ensemble of swans, hoofers, tappers and strutters. I hope they all get it; I hope you’ll all see it.