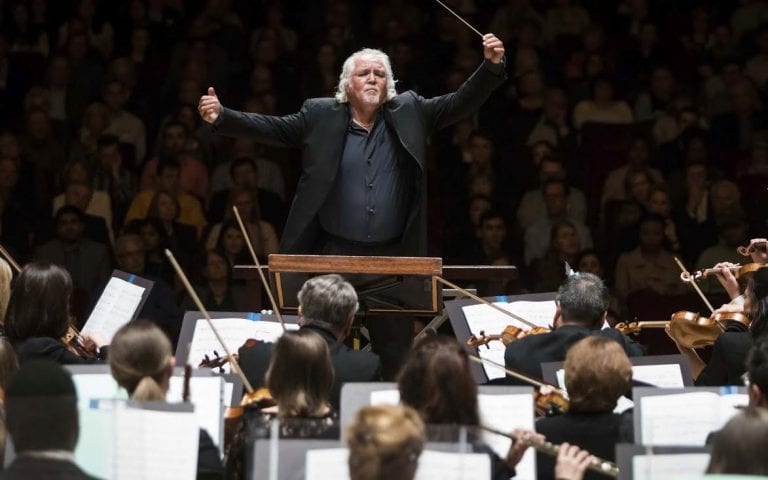 The history of music and art has left us with a lot of examples of unfinished business — great masterpieces that, for whatever reasons, never got completed, often due to the demise of the artist or the subject of their art. Sometimes the idea of completing such a work is abandoned, and sometimes it can simply take years to flesh out an idea. After all, some creators would argue: Is any art ever really finished?

In classical music, we have plenty of instances, most prominently Mozart’s Requiem, left incomplete at his death and finished by Franz Xaver Süssmayr, although other competing editions have emerged, such as that of Roberto Abbado, which the Atlanta Symphony Orchestra and Chorus performed under his baton this past February.

That brings us to Thursday night’s performance of Gustav Mahler’s Symphony No. 10 by the Atlanta Symphony Orchestra under the baton of principal guest conductor Donald Runnicles. As was the case with Benjamin Britten’s “War Requiem,” which Runnicles led last week at Symphony Hall, Mahler’s 10th is so long that it was the only work on the intermission-less program, clocking in at just over 75 minutes. The program will be repeated tonight in Athens at Hodgson Hall, then again on Saturday back at Symphony Hall.

Although a work worthy of that composer, it is not my favorite Mahler symphony. It is his final composition, in five movements. The opening “Adagio” movement, which is more often heard as a standalone work and the only part Mahler fully scored himself before he died, and portions of the more episodic finale were the highlights. The pair of very different scherzo movements were not far behind — the first vibrant, a gentler ländler as a trio; the second more of a sardonic waltz. But Runnicles is playing in his home ballpark with Mahler and brings out the best from the score, even if, as in this case, it was brought to a performable form by someone other than the composer himself.

Mahler wrote the extant materials in the summer of 1910, and at the time of the composer’s death the next year, the first movement was complete with the rest left in sketches of various levels of completion. These manuscripts were published in facsimile in 1924. Mahler’s widow, Alma, tried to engage multiple notable composers to finish the work, without success. The work finally fell to musicologist Deryck Cooke, of whom Alma initially disapproved but finally came to support. Cooke worked on Mahler’s 10th over a considerable span of time, producing multiple revisions, modestly calling his efforts a “performing version” rather than a “completion.”

Cooke’s first version, workshopped in performance in 1960, was incomplete (known as “Cooke 0”). Each of the subsequent versions has a performance history with the ASO. Former associate conductor Michael Palmer conducted the ASO’s first performance of Mahler’s 10th using “Cooke I” in 1971. The most recent performance by the ASO was led by co-conductor Louis Lane, presumably the “Cooke II” version, in 1985. On Thursday night, Runnicles and the ASO used for their first time the further corrected “Cooke III” version.

Cooke’s work is a credible realization of Mahler’s music. Runnicles and the ASO brought that credibility to life, even as much of a challenge as the work seemed for the expanded size of orchestra the score demands. As if it were Mahler’s own, the orchestration gave various sections and individual players good feature time, too many to name, but they were duly recognized by Runnicles in the ovations.

It is not an easy work for the average concertgoer — and a handful of patrons conspicuously got up and left at various times during the performance, which is unfortunate, as they all missed the most interesting parts of the finale. For devoted Mahler fans, it was worth the effort to hear it played by Runnicles and the ASO, even if it is less engaging a work overall than some of his other, better-known symphonies. After all, it may be another third of a century before we get to hear it again in Symphony Hall.