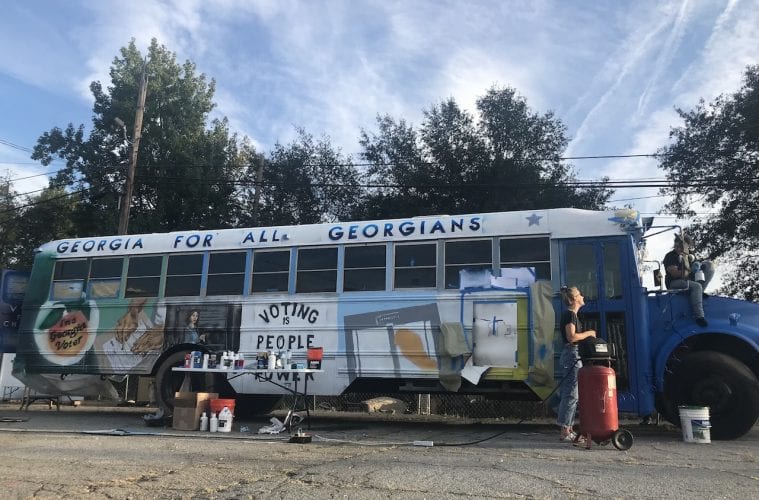 Politics and art merge at Turn Up/Turn Out, a party with Little Tybee for voter engagement

As Atlanta descends deeper into a time of dark political discourse, there is a bright light at the end of the tunnel — a chance to have voices heard on Election Day. Georgia Artists for Progress, a nonprofit organization with the mission to use art to bridge the gap between Georgians and politics, and other organizations host Turn Up/Turn Out Saturday to rev up for the upcoming election.

The event at The Bakery celebrates the act of voting in general with several guest speakers, voter information booths, the Hope for Georgia Bus, an informative gallery and music by local musicians.

Music acts include experimental folk-rock group Little Tybee led by frontman Brock Scott with his immersive falsetto and acoustic guitar alongside Nirvana Kelly (violin/viola), finger-tapping guitar authority Josh Martin, Chris Case (keyboard/ synths), Ryan Donald (bass) and drummer Dallas Dawson. Scott is a leader in the DIY community and has taken to the internet to expand music and multimedia content under the name On The Grid Creative. Kelly is also the executive director of Georgia Artists for Progress, keeping her in the loop with music and politics. Athens-based rapper and recently elected commissioner Linqua Franqa and exploratory alien rock group LONER will keep the party bumpin’.

Liliana Bakhtiari, a candidate for the Atlanta City Council’s District 5 seat, and Living Melody Collective, a collective comprising female-identifying Atlanta-based artists, will present the Hope for Georgia Bus. The restored bus is an ongoing social justice project with the purpose to inform, engage and mobilize voters.