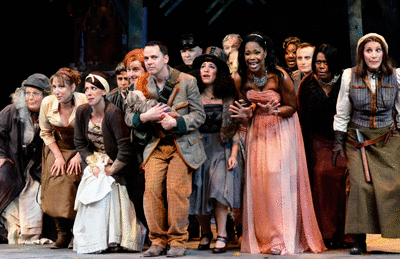 Atlanta’s Alliance Theatre opens its 43rd season with a new production of “Into the Woods,” Stephen Sondheim’s dark-tinged musical comedy built from the intertwined stories of five fairy tales. This might be considered an apology of sorts for the fiasco two years ago when the company scrapped “iSondheim,” a new Sondheim review to have been written and directed by Sondheim’s longtime collaborator, James Lapine. After the Atlanta premiere, the show would have gone directly to Broadway, but investors backed out and “iSondheim” was transformed into “Sondheim on Sondheim,” which skipped Atlanta and opened on Broadway in 2010.

A revival of “Into the Woods” hardly arrives with the same hurricane force as a major new Sondheim show, but a locally produced professional production of this 1987 whopper is still a big deal. And a challenging one: “Into the Woods” is a flawed, complicated puzzle. When done well, which is mostly the case here, it can be one of the most rewarding of Sondheim’s plays. The show will run through October 2. For tickets, click here. 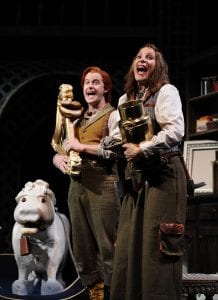 The book, by Lapine, mashes together Cinderella, Little Red Riding Hood, Jack and the Beanstalk and Rapunzel, along with a baker and his wife (a childless couple who desperately want a child). And though each character is wittily exploited for pure comedic fun along the way, they must also expound at exasperating length on the psychological meaning of it all. There are an exhausting variety of plots and subplots, mostly centered on wish fulfillment and unintended consequences, but also touching on child rearing, conquering fear, community and the like. In the first act we see the fairy tales mostly through rose glasses. And in the second act, the seven deadly sins intervene, along with Freud and his colleagues, to make heavy, heavy points. Were it not for Sondheim’s extraordinary and intricate score, it would be a rather long sit.

This production, directed by Susan V. Booth, excels in moments of droll comedy. The two princes, for example, played by Hayden Tee and Corey James Wright, are invested with the arch vanity of characters from Monty Python. Their “Agony” duet is possibly the musical highlight of the evening, because of the level of singing and because they resist the temptation to take the joke too far. Tee also serves as the Wolf, giving the character the leering, lewd qualities that are essential to the role. And, in general, the strength of the production is the finely honed acting from almost everyone in the cast and the handling of the comic-tragic balancing act. Because it deals with fairy tales, there’s a temptation with “Into the Woods” to make it into “family fare,” which it definitely is not. Booth wisely avoided that trap, and many others. 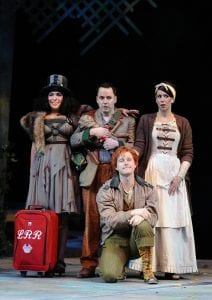 The weakness, frankly, is the singing. What make Sondheim’s works special are their delicately woven scores and wealth of singing opportunities. They require, and reward, the casting of good singers. Nothing here is wretched — no need for earplugs or flight into the night — but some of the moments of soaring pleasure, the very thing that distinguishes Sondheim from his contemporaries, are compromised.

Perhaps the best overall performance comes from Angela Robinson, who portrays the Witch (a role created by Bernadette Peters). She is fine as a character actress as the powerful, hideous sorceress, with a stage-dominating presence that still manages to hint at the troubled mother underneath the façade. Later, she is transformed into a beautiful mortal, without magic, but with a toughness lacking in the other characters. The calibration that it all requires must be maddening, but Robinson shows us all sides of her complex character, and she sings like a diva. The latter might not be standard for the role, but she makes it work in her own way.

Mark Price, as the Baker, lacks the voice to really deliver his role to us, and his performance seems curiously understated. Courtney Balan, as his wife, fares better, hitting stride especially in her solo “Moments in the Woods.” Jeremy Wood, as Jack, makes his character such a shallow simpleton that it’s hard for anyone to identify with him. As for his voice, he has not developed the kind of coloring and expressiveness that would bring his singing alive. Jill Ginsberg’s Cinderella is well acted, and she sparkles from beneath the shroud of doubt and fear that her character carries around. Her gentle performance of the show’s anthem “No One Is Alone” is most affecting.

Walter Hudson is a splendid and compelling Narrator. Courtney Collins turns in a scene-stealing performance as Jack’s mother, another complex role that veers between comic shtick and passionate emotion.

Perhaps the most controversial element of this production was the decision to use unpaid high school musicians for the orchestra. Obviously it saved a lot of money. You’d think it would be a source of tension with the musicians’ union, though the lack of protest pickets suggested a truce. (The Alliance very rarely uses an orchestra; for this show, the musicians’ arrangement was officially billed as “a unique collaboration” among the Atlanta Symphony Orchestra, the Atlanta Federation of Musicians, the Atlanta Symphony Youth Orchestra, the ASO Talent Development Program and the Alliance.) In the event, it proved to be a smart idea. These are very talented kids, and the level of playing is close enough to professional that the problems go mostly unnoticed. More significantly, it allows the use of a large orchestra, with real strings, when most local performances would have made do with much less.

Todd Rosenthal’s charming unit set features an elaborate, spooky woods, with the stage divided into several areas on different levels. While attractive, this constricts the area for acting with such a large cast and limits the kind of choreographed performances that might have added to the musical numbers. Lex Liang’s earth-tone costumes are a bit muted but do no damage.

“Into the Woods” visited Atlanta as part of a tour in 1988, a year after it opened on Broadway. But this is a play that doesn’t get done often, simply because of its scale and the difficulty of casting. No production has completely overcome the problems inherent in the work, but most have brought a new perspective, as does this one. For the Alliance, it’s a promising start for an interesting season.