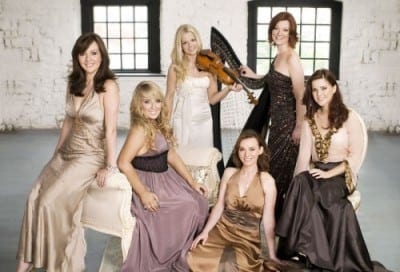 The Public Broadcasting System has eked out a modest existence for many years in part by showing its viewers new ways to look at music. As we’d expect, some of the fresh perspectives have been edifying, others cloying. Amid seminal jazz productions and the support of, among other things, “Austin City Limits,” a few genre-bending performers have risen to prominence. In the 1990s, Sarah Brightman used her PBS specials to spew sterilized classical music, leaving in her wake the classical-crossover genre. (The latest of PBS’ crossover darlings, pint-sized Jackie Evancho, infiltrated Atlanta’s Symphony Hall a few months ago.) Currently, a handful of groups born from PBS’ “Riverdance” specials are bringing a new definition of Celtic music to a worldwide audience.

On Wednesday, the all-female ensemble Celtic Woman brought its vaguely Irish or somewhat Scottish aesthetic to the Fox Theatre. Camera crews were on hand to capture the action for a new PBS special titled “Celtic Woman: Believe.”

The “Celtic” descriptor is nothing new and has been previously applied to bands as diverse as the 1970s Irish folk group Planxty and the Chieftains, a crossover band in its own right. Celtic Woman has twisted the meaning even further and decided on its own musical path — but what exactly is it?

Those lucky enough to snag tickets to Wednesday’s well-attended performance, the second show in a two-night run at the Fox, could be forgiven if they came away a bit confused about the genre. The group’s current iteration consists of three vocalists — Chloë Agnew, Lisa Kelly (a former “Riverdance” participant) and Lisa Lambe — who were backed by a group of traditional Irish musicians, a small string section, two percussionists and the occasional Great Highland bagpiper. The fourth member of the group, fiddler Máiréad Nesbitt, was granted solo features for an occasional helping of jigs and reels.

Judging from the show, which ran two and a half hours, this particular Celtic canon extends to Simon and Garfunkel’s “Bridge Over Troubled Water,” Eric Clapton’s poignant and oft-covered “Tears in Heaven,” Elton John’s “The Circle of Life” and, um, “Ave Maria” (the Schubert version). To be fair, the group did sing a few Scottish and Irish tunes, including a saccharine, downtempo version of “Si Bheag, Si Mhor.”

Defining the Celtic Woman sound may not have been on the minds of all 4,000 people (by the producer’s count) who packed the Fox to let off a little steam, have a bit of fun and maybe see themselves on TV. Judging from the lines for the restrooms at intermission, the gathering could have been an average symphony crowd — a base age range of 50 to 65, with occasional accents of youth — if not for the predominance of shiny green blouses.

These witnesses to the Celtic Woman spectacle awarded nearly every tune with a standing ovation, but they responded most enthusiastically to the physicality of the fiddle tunes. Nesbitt floated around the stage, leaping and twirling as she played. The crowd erupted into a roar of approval as she navigated a series of tight, dizzying spins, all while keeping pace with her accompaniment.

As for the singers, their voices are not displeasing, but they are completely innocuous. Every vocalist hit her pitches, and nothing sounded out of place. But it was impossible to hear a compelling grain to any of the voices, because by the time the sound journeyed from microphone to speakers to anxiously awaiting ears, it had been processed and scrubbed down to a squeaky-clean shine. The uninspired arrangements were as generic as the singers.

The night was not a total loss, however; the concerts must have been an economic boost for the city. Producers booked bagpipers from the Atlanta Pipe Club, local orchestral musicians and the Gwinnett Young Singers. Officials at Public Broadcasting Atlanta also came away as winners (tickets in the orchestra section went for $80 each). But do the increased exposure and the monetary gain justify the means? For most of the audience, the answer was an emphatic yes.