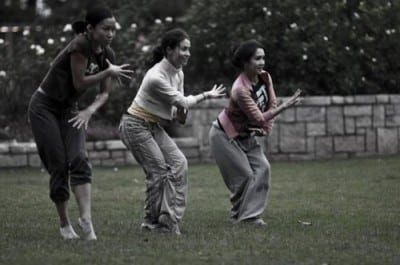 Wabi sabi is a Japanese term for “finding beauty in the environment, the imperfect, the unconventional” and for giving one’s spirit up to the environment, says Atlanta Ballet dancer John Welker. Intent on highlighting the company’s creativity, Welker founded “Wabi Sabi,” its innovative performance series, which offered seven new works Thursday at the Atlanta Botanical Garden. Company members were joined by students and guest choreographer Juel Lane.

The idea of free outdoor dancing isn’t new to the city. GloATL’s groundbreaking series of large-scale site-specific works has had a tremendous impact on the city’s arts culture — more, I’d wager, than its predecessors Beacon Dance, Gardenhouse Dance and others. Dance Truck, too, has raised production values for emerging independent choreographers while providing them with venues, while Art on the BeltLine has several dance projects on record and in the works. To a large extent, “Wabi Sabi” follows a trail that’s already been blazed, although, in this case, the Botanical Garden charged its usual admission fee.

But where others eschewed convention, Atlanta Ballet’s strength is twofold: as the highest-profile professional dance company in the region and for its classical ballet tradition. “Wabi Sabi” wasn’t so much trying to grab public attention as to step off the proscenium stage and into a more public setting, as if to say, we can do this too. Offering a more intimate view of the Atlanta Ballet dancers, the evening showed how refined, exuberant and open-hearted they are.

The series of seven chamber-sized works, placed in different settings around the garden, didn’t introduce new vocabularies; instead, it gently stretched ballet’s language. Like Twyla Tharp, with whom they’ve worked intensively all summer, these emerging dancer-choreographers folded diverse styles and genres into ballet movement. The result was a pleasurable marriage of traditional and trendy styles.

Production values relied on Mother Nature, whose lighting cues did not accommodate delays due to pre-show traffic. Despite this glitch, the evening successfully highlighted the company’s creativity (part of its marketing plan) and offered intimate views of its artistry and character. Maps in hand, a well-heeled crowd — the garden’s staff reported about 1,000 people — ventured from one setting to the next, through towering old trees on contoured terrain, where dancers splashed in the Cascade Garden fountain, to the Edible Garden, where Christine Winkler and Heath Gill danced “Apache” by Tara Lee. This tangled-up duet wound between fiery physical attraction and brutal aggression, reminiscent of Tharp’s “That’s Life” but with a 1920s tango flair.

There could be no better setting for Christian Clark’s duet “Song to the Siren” than the elegant, impeccably maintained Great Lawn by the reflecting pool. Jackie Nash and Clark danced with disarming lyricism that summed up the spirit of the evening. Lushly romantic, to a piano’s gently insistent heartbeat rhythm, their arms swept through the cool, fragrant air, reaching toward each other, then out to the surrounding trees. Clark cast Nash above his head, where for a transcendent moment she seemed to open her whole being to the dusky canopy of pink-and-gray clouds, conjoined with nature, sensual, disciplined, tender and triumphant.

Warm light illuminated the garden’s Mershon Hall for “Akara,” a Depression-era sextet with a Jerome Robbins-style theatricality. In a transit station setting, a brown leather suitcase seemed to hold the characters’ aspirations. At the heart of the piece lay a duet between Lee and Clark. Repeatedly, Lee would reach out toward the suitcase, only to be pulled back into his embrace, expressing a stay-or-go personal dilemma that’s prevalent among artists in this city.

Nicole Jones in the fountain for Atlanta Ballet's "Wabi Sabi."

“Wabi Sabi” was admittedly part of a plan to publicize Atlanta Ballet’s focus on contemporary dance this season. That is justifiable, because it’s going out on a limb to feature so many works by high-profile choreographers this season. But what might have been seen as an attempt to cash in on a trend — outdoor dance that attracts public attention — instead revealed the dancers’ unique gifts. It wasn’t explosive; it didn’t captivate by its novelty so much as its classic beauty: the openness of these human beings, honed by years of disciplined work, comfortable in their own skins, just being who they are. The evening also showed that, amid Atlanta’s rage for site-specific work, classical ballet tradition provides a strong, flexible foundation for new exploration and growth. Like the English garden, its underlying form is the key to its ardent beauty.