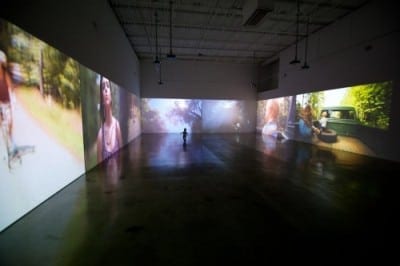 Review: Micah Stansell’s engrossing “Water and the Blood” muses on vagaries of knowledge

Those of us who grew up in Southern families know about family stories.

Though they were told in different circumstances as the decades changed, they always came in random installments. Seldom told in one go as in the days of William Faulkner, they had to be pieced together in the hearer’s memory, and usually it was necessary to ask questions to figure out who the major players were and what they had to do with each other, or with us. In other words, we were living in an experimental novel without knowing it. What mid-century modernists called the Discontinuous Universe was already ours in our stories. 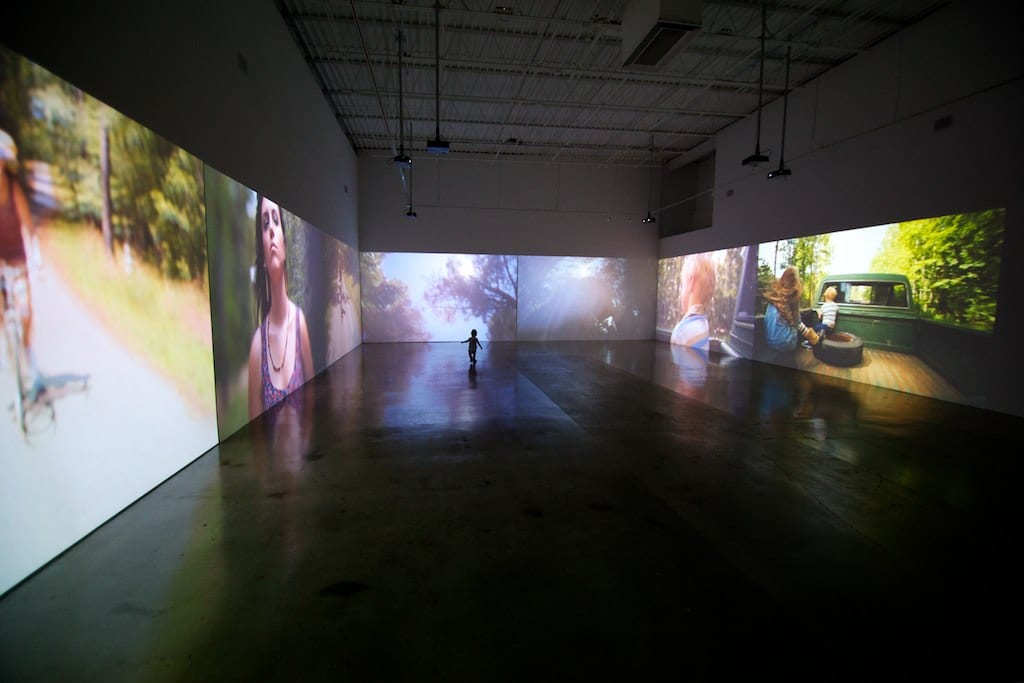 Micah Stansell’s multimedia “The Water and the Blood,” at the Museum of Contemporary Art of Georgia, raises the art of family storytelling to levels of post-postmodern self-awareness. History arrives in multiple packages of overlapping experience, literally. Incorporating the digital inheritance from the fragmented narratives of old-school modernist cinema — derived as much from experimental fiction as the nouveau roman of the 1950s was derived from cinema — Stansell has created a multi-screen set of overlapping stories, accompanied by three significantly different soundtracks, which requires a level of simultaneous moments of awareness just to experience properly. (Which individual screen does the soundtrack fit now?) It may require multiple viewings to begin to get the story straight. It already requires keeping track of disparate images on three walls at once, and putting on two sets of headphones in succession to hear very different perspectives on the tale(s?).

Fortunately, the story’s images and its ways of being told are so mesmerizing that they more than hold the viewer’s interest during repeated viewings. The national anthem sung in a mode that initially recalls shape note singing, a wrestling match to remember, details of a dry cleaning establishment, children exploring in the woods, other archetypal moments I won’t spoil by revealing them — this succession of brilliantly paced, resonant imagery is juxtaposed repeatedly with images of cows, in scenes from cattle auction to fly-filled pasture. The unromantic realities of cattle raising are clearly at the core of the story Stansell wants the viewer to piece together. The soundtracks alone would give us that clue, just as the video projections do. The full story, however, requires all of them together plus our own imaginations. 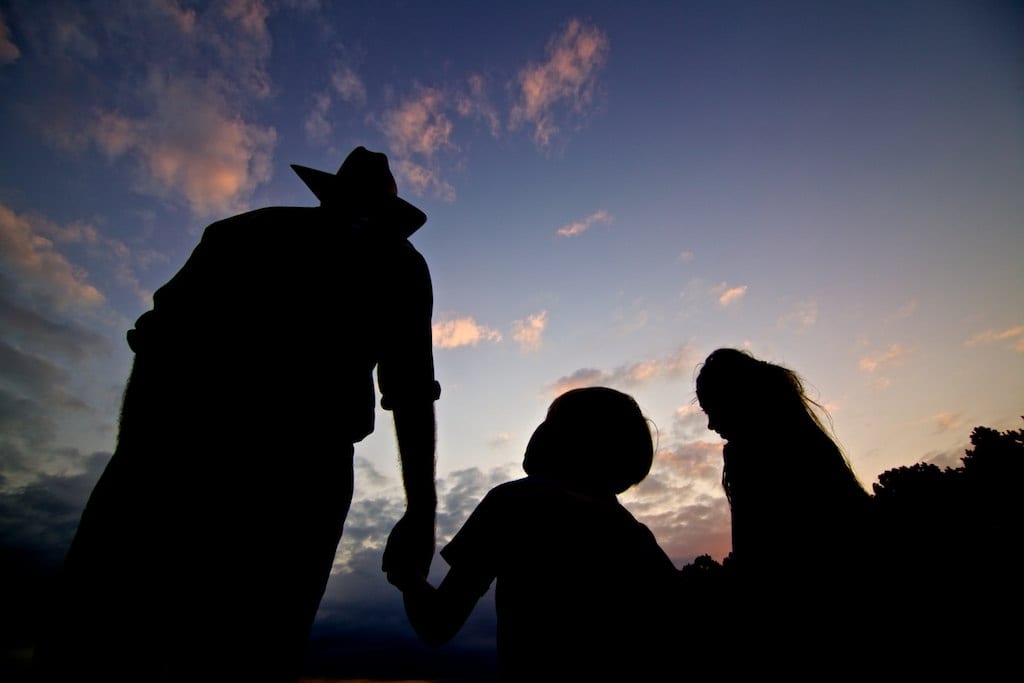 The philosophical analysis that dominates one of the soundtracks eventually becomes a useful guide to the labyrinth of story and re-collection of an intrinsically fragmented narrative. The aphorisms include advice on the cast of mind needed for “undoing a stubborn knot,” as well as meditations on the limits of understanding. Someday we might indeed understand every moment of everyone’s history, as one solo speech in the soundtrack suggests — but not in this life of endlessly partial perspectives. 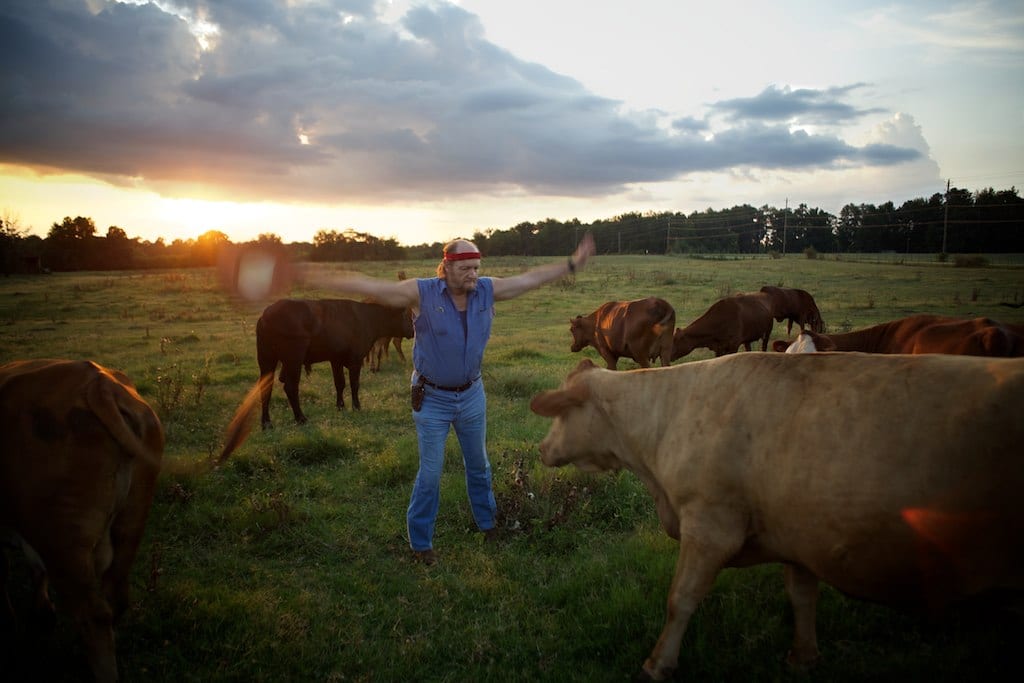 “The Water and the Blood” delivers this lesson from the moment the viewer has to choose between continuing to listen to the ambient music in the gallery or selecting Option 1 or Option 2 from the headphones hanging on the wall. Here and now, we know only in part.

The old saying “blood is thicker than water” may be relevant to this tale, as may the line from a Protestant hymn from which the title appears to be taken. Either reference would be closer to the experience of the family members in the original story or stories, or to the family members who serve as actors in the deconstructed drama. Stansell’s video version of the story has been taken far past the unified world-view in which the original storytellers “knew in part,” and hoped for the future condition in which we would know completely.

The world in which “The Water and the Blood” unfolds is the one in which many have grown uncertain whether we shall ever “know as we are known,” or be known in the way the original writer of those words meant them. And in many, many ways, Stansell’s multi-narrative tale addresses that difficult condition.

“The Water and the Blood,” Micah Stansell’s Working Artist Project exhibition, runs through December 3. The artist will speak Thursday, September 15, at 7 p.m. Doors open at 6:30.