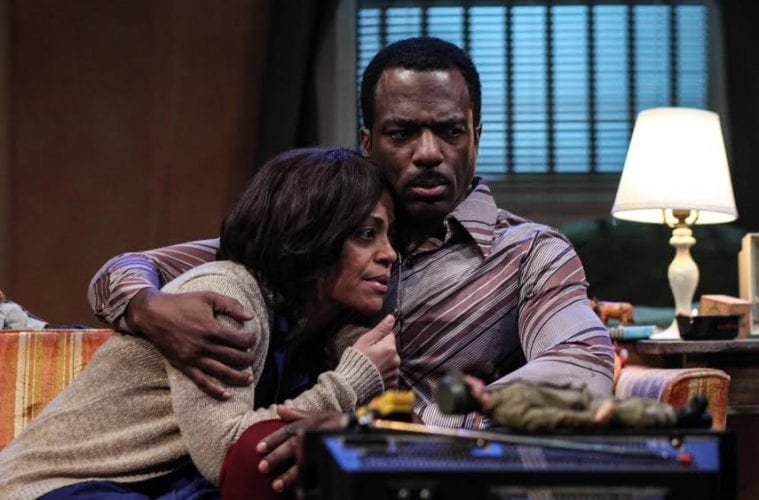 Problematic mother-daughter relationships may be plentiful in plays, but few are probably as antagonistic as the one in Serial Black Face, a new world premiere play by Janine Nabers at Actor’s Express through April 24.

Though the play has as its backdrop the Atlanta Child Murders, the period during the late ’70s and early ’80s when as many as 30 African-American adults, teens and primarily children were kidnapped and murdered, the action focuses primarily on the story of mother Vivian (Tinashe Kajese-Bolden in splendid form), whose son Sammy is among the early missing, and her only daughter, rebellious 15-year-old Latoya (played by newcomer Imani Guy Duckette, daughter of Atlanta-based actress Jasmine Guy).

A handsome and mysterious drifter dubbed The Man with the Face (Gilbert Glenn Brown) comes into their lives at a difficult time. Vivian is desperate for comfort from any source, and she and George hastily marry, but in a Lolita-like development, a rivalry develops between mother and daughter for George’s affection and attention.

Anyone hoping for a weepy, one-dimensionally redeeming, Lifetime movie-of-the-week tale of innocent victimhood will be surprised by the bleak, existential themes and desperate, complicated choices at the heart of Serial Black Face. Mother-daughter relationships may be common in plays, as I’ve pointed out, but relationships between African-American mothers and daughters remain relatively rare, and a relationship as disconcertingly thorny as this one may be singular.

An audience couldn’t hope for a better actress in the central role than Kajese-Bolden, who memorably gave surprising depth and humor to the small role of Jory in the Alliance’s recent production of Disgraced. She capably expresses the character’s helplessness, her strength, her resourcefulness, her need and inexpressible grief. Duckette’s pert replies and diffident air may have too many touches of contemporary adolescence to be a believable throwback, but she nonetheless provides a capable foil, and a believably wayward and unruly provocateur to Kajese-Bolden.

A major problem with the play is that the two parallel stories — the domestic drama and the story of the missing son — aren’t always explicitly connected and, indeed, as the action unfolds, they often don’t feel viscerally or emotionally connected the way they should. In the end, there’s something dissatisfying and inconclusive about the disconnect. Sammy’s story recedes, and the domestic drama — though its outcome is shocking — can occasionally feel inert: George starts as stranger to both mother and daughter, so we don’t begin from a point of intense emotional connection or rivalry amongst the three.

Still, the play is worth seeing for Kajese-Bolden’s performance, which gives the story true touches of Greek tragedy. Our heroine isn’t just beleagured by misfortune, her downfall comes from a troublingly sympathetic and disturbingly recognizable tragic fault.