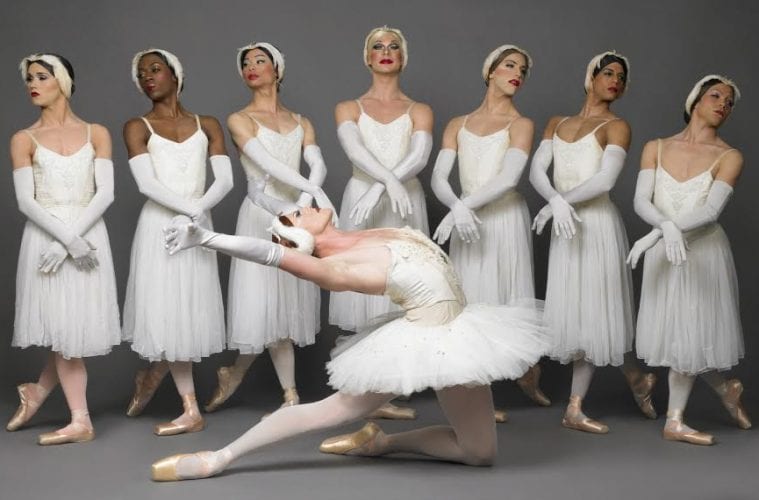 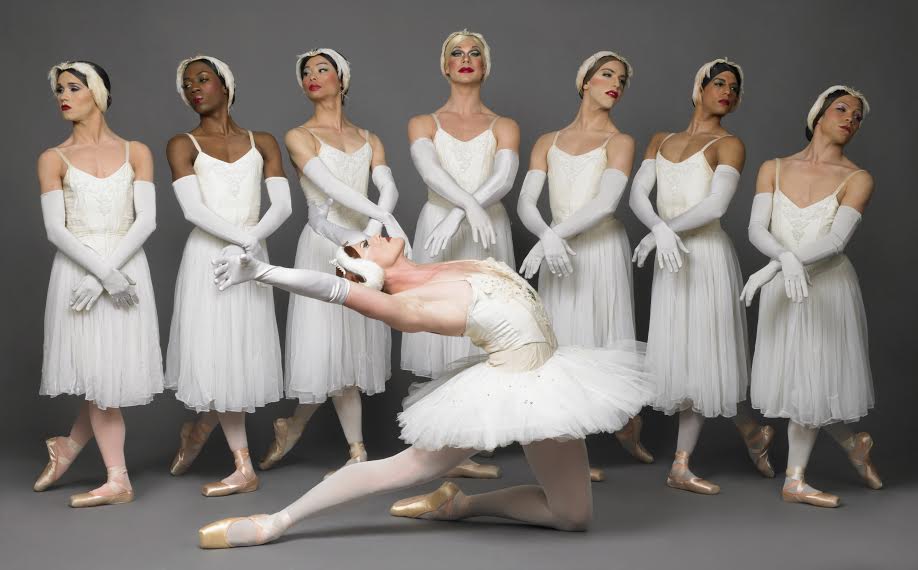 Move over, Misty Copeland — the Trocks are here. The all-male parody troupe, Les Ballets Trockadero de Monte Carlo, brings its heft and humor to the Ferst Center for the Arts on April 9 and 10.

The dancers will perform a wildly silly version of Swan Lake, Act II, a one-act mash-up of Don Quixote, the “pas de six” from Esmeralda and a bravura warhorse such as the Le Corsaire pas de deux. Or, if we’re lucky, a deliciously overwrought Dying Swan. In each case, they will perform the female roles in full Russian ballerina regalia — pointe shoes, tutus, tiaras and attitude. Make no mistake, the eyelashes are huge and the humor is broad, but these days it’s also supported by excellent technique.

“We can’t have an entire evening of ha, ha, ha, look at me, laugh at me,” says company ballet master Paul Ghiselin. “We’re not relying just on the humor — we really get to bite into the classicism.”

And bite they do. These guys whip off triple or quadruple pirouettes on pointe and when their Swan Queen ripples her arms in glorious liquid motion she brings to mind some of the world’s finest ballerinas. Of course, those ballerinas weren’t wearing long white evening gloves or bobbing their heads like chickens. 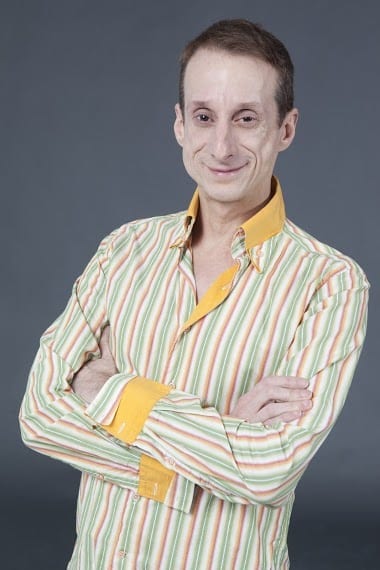 As good as the dancers look in their bejeweled tutus, it’s always clear they’re men. “You put the affects of a female dancer on a male body and it’s going to look weird — that’s in part where the humor comes from,” Ghiselin says. “Because the male body is not as lithe and petite as a woman’s, everything is going to look a little different. But there are strengths in what a man can do. The jumps are higher, the turns are more ferocious and the landings can be a little louder.”

The men learn the choreography as it was originally created, without the humor. Their Swan Lake is based on the Lev Ivanov production that England’s Royal Ballet used to perform. Their Paquita, a flurry of divertissements set to Léon Minkus’ bouncy score, hews very close to the original. “We do all the steps, all the mapping of that ballet just as it was created,” Ghiselin says. “Here and there we have to alter things because we’re men, but not much.”

This commitment to tradition makes the Trocks more than a burlesque show. They truly love the form, and their parodies of the white ballets are kind, not crude: The mime scenes in Swan Lake, for instance, which many present-day companies have minimized or cut out altogether, are both respectful and hilarious. In Le Corsaire, the dancers do a fine job with the demanding turns, jumps and lifts. The humor comes in the interstitial moves — a nutty wind-up before a big variation, a surprise series of gymnastic flips and a tad too much attitude. Always attitude!

The dancers learn from the pros. Russian ballet teachers who have performed the classical repertoire coach them on the finer points of technique and style: the tilt of the shoulders, the placement of the head, how to attack certain steps, how to hold certain poses. “They crack the whip and they are also incredibly supportive,” says Ghiselin. “They love what we do.”

The audiences in Russia loved them too. “I thought they might think of us as a vaudeville act when we performed in Moscow and St. Petersburg — home to the Bolshoi and Kirov (Mariinsky) Ballet, respectively,” says Ghiselin. “They are dance people and they love their ballet. They see we have the Russian training and that we are trying to attack this style. They really respond well to us.”

Once the men have learned the steps, they look for ways to incorporate humor. Ghiselin says it’s a “constant juggling” between the classicism and the jokes. “Sometimes we don’t get it right. Something that worked ten years ago might not be so good now. Sometimes a performer joins us and can’t do the same joke the way somebody else did it. It’s always a process.” 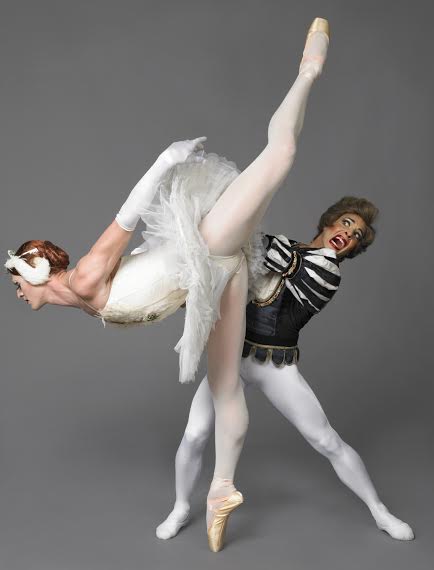 Lampooning ballet’s grand artifice has worked well for the Trocks for more than four decades. They made their debut in Off-Off-Broadway lofts in 1974 and got a stellar review that year from Arlene Croce, then The New Yorker’s highly respected dance critic. Ironically, in the same essay she panned the “Stars of the Bolshoi Ballet” because she found the dancers to be “coarse and unattractive.” The company went through a rough patch in the 1980s and early ‘90s and almost closed down — there was the AIDS crisis, too few good dancers, poor organization, no money — but they recovered and now tour regularly in Europe, Asia and the United States.

The ensemble takes its name from one of the seminal companies of the early 20th century, the Ballets Russes de Monte Carlo, an offshoot of the famed Ballets Russes de Diaghilev. Russian ballerinas Irina Baronova, Tatiana Riabouchinska and Tamara Toumanova, known as “the baby ballerinas,” were among the stars. Part of the Trocks’ humor lies in their pseudo-Russian stage names — among them Olga Supphozova, Tatiana Youbetyabootskaya and Ida Nevasayneva — their mock biographies and the heavily accented pre-show announcements.

Most of the dancers who launched the company were better at pratfalls than pirouettes. “Maybe one or two trained dancers would carry the heavy roles,” says Ghiselin who has been with the company since 1995. He’s best known for his Dying Swan, which features a molting tutu, a pained expression and countless curtain calls. “Now you have a full company of men who are quite adept at carrying on those same roles and doing them rather well. It makes for a more interesting show because you are not relying solely on humor any more. The company has something else to say.”

Male ballet dancers are trained differently from women, in large part because the women are on pointe and the men are not. British choreographer Sir Frederick Ashton put men on pointe for comic effect in his Cinderella, The Tales of Beatrix Potter and The Dream, but this is a rarity. In the Trocks’ early days, most new members learned how to dance on toe after they joined the troupe. Today, says Ghiselin, “we see guys coming into the company fully trained en pointe. They are ready to go and quite adept at the technique.”

The ensemble’s focus on the Russian classical repertory — with a little Balanchine and Cunningham thrown in — has changed little since the 1970s, but many serious companies, Atlanta Ballet among them, have changed dramatically, dropping the classics in favor of contemporary works. The Trocks’ are therefore serving the unintended purpose of giving audiences a chance to see rarely performed tutu and tiara showpieces such as Esmeralda and Paquita, albeit with comedic touches.

Misty Copeland has become a sensation because she is one of a handful of African-American dancers in a major ballet company and the first to be named a principal dancer at American Ballet Theatre. The Trocks have upped the ante in this regard. The 18-member troupe currently has two black dancers, Robert Carter (Olga Supphozova) and Duane Gosa (Helen Highwaters). The big mainstream companies depend on uniformity, Ghiselin explains. “But in our group we don’t need the entire group to look the same. We like individual personalities and body types. It’s less important what race you are or what size you are. That’s one of the wonderful things about the company.”

And if a dancer has a hairy chest, Ghiselin says, “we don’t mind.”