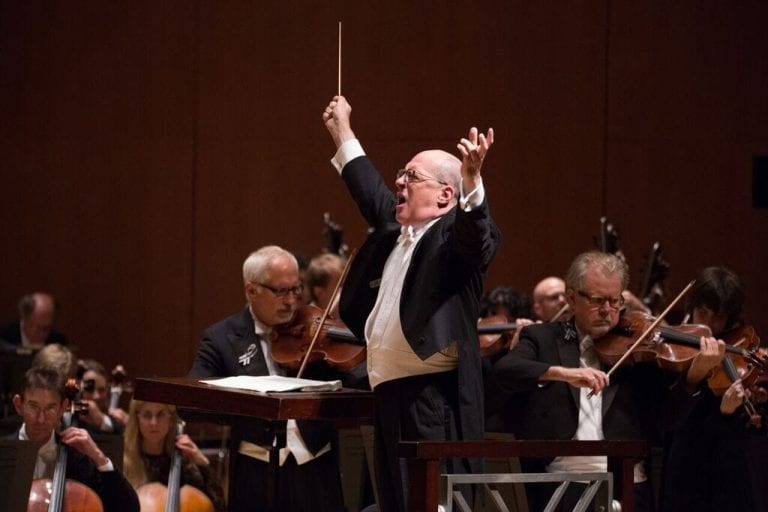 The Atlanta Symphony Orchestra will receive NEA funding in support of its two-year "LB/LB" celebration of the music of Ludwig van Beethoven and Leonard Bernstein. (Photo by Jeff Roffman)

News: The ASO’s Evans Mirageas explains the creative spark behind the upcoming 2016-17 season

The classical subscription concert season proper kicks off with Spano and pianist Garrick Ohlsson, a long-time Atlanta favorite. The 23-weeks worth of subscription concerts are almost all anchored on Thursdays and Saturdays. Spano leads 10 of them, principal guest conductor Donald Runnicles conducts four, and assistant conductor Joseph Young ascends the podium for one, with eight guest conductors also scheduled.

The 2016-17 ASO season will feature several distinctive programming motifs within an overarching theme of “creativity.” It will include three world premieres and 12 ASO premieres. ArtsATL spoke recently with Evans Mirageas, the ASO’s vice president of artistic planning, about the programming.

ArtsATL: Could you tell us about the motivations, ideas and inspirations behind the 2016-17 season programming?

Evans Mirageas: The season revolves around the whole notion of “creativity,” because at the heart of it is the revival of Christopher Theofanidis’ “Creation/Creator.” It was originally predicated on an invitation from the SHIFT Festival to be part of their inaugural season at the Kennedy Center [in Washington, D.C., in 2017].

We knew that we had to remount “Creation/Creator,” if for no other reason than to prepare for the national exposure that we would get for this incredible piece, for which we’ve also made a commercial recording. From that grew the idea of celebrating creativity in general, and modern and American creativity in particular.

Part of what we have been doing over the years, without really calling any attention to it beyond the fact that we do it often, is that we present masterpieces of the 20th and 21st centuries — or potential masterpieces — because we’re creating them ourselves in the whole Atlanta School of Composers and the commissions that we have every single season.

So Robert decided to make a big deal out of it and create a series called Modern Masters, a combination of pieces that have already entered the canon of classical music as well as pieces that we are adding to it. With nearly every one of the programs there is a brand new work, or a pretty new work, and a masterpiece from what we would call the Modern Era, which, for the purposes of argument, let’s say [began with the] Symphony No. 1 of Gustav Mahler, the last symphonist of the 19th century and the first symphonist of the 20th century.

ArtsATL: On our end of that modern chronology, this coming season marks the 70th birth year of John Adams, the most performed living American symphonic composer. The ASO is celebrating it with four of his works. What distinguishes Adams as a significant American composer for our times?

Mirageas: One of the things that separates John from any other composer of his generation is, first, his creative evolution.

John started out being very much a member of that aesthetic we have now come to call Minimalism, that says less is more, [having] nearly no harmonic movement [and] very, very repetitive patterns — hypnotic and quite beautiful but it is music more about stasis than it is about kinesis.

What happened to John is that he grew and moved beyond the initial impetus of what began his career and found his own genuine voice. The importance of John is not only someone who helped redefine the path or the trajectory of concert music, he’s a wonderful example of how a composer never stops growing and never stops evolving.

Robert chose to honor John by offering a couple of different ways of looking at his musical personality, a couple of the pieces that help make his reputation early on, but [also] one of his most ambitious and grandiose works for symphony orchestra, “Harmonielehre,” which is a tip of the hat to the famous textbook by Arnold Schoenberg.

ArtsATL: Most interesting to see, near the end of the season, is a nod to a famous mythological musical-poetic creator, Orpheus, in the opera “Orfeo ed Euridice” by Christoph Willibald Gluck.

Mirageas: [It is] the one major title that former Atlanta resident David Daniels has not recorded in his incredible career as the world’s most celebrated and oft-recorded countertenor. [We will hear] him in what is arguably his finest starring role, Orpheus.

ArtsATL: I also note that several concerts acknowledge the elemental aspects of nature as creative forces.

Mirageas: In the fall we have this wonderful festival of three weeks where in each week we explore one or more of the essential elements of antiquity — earth, air, fire and water — in musical poetic terms.

For water we have the “Sea Pictures” of Sir Edward Elgar and the “Sea Symphony” of Ralph Vaughan Williams. The “Sea Symphony” was one of Robert’s first recordings with the orchestra after he became music director. It’s a piece we’ve taken to Carnegie Hall. [For] the “Sea Pictures,” the soloist is none other than Jamie Barton, who lives in Atlanta and is a worldwide star now. This will be her ASO debut.

The element of fire is [portrayed by] Oliver Knussen’s “Flourish with Fireworks,” fire to simply entertaining us; Scriabin’s “Prometheus, The Poem of Fire,” the story of Prometheus in symphonic form; and Stravinsky’s “The Firebird,” [in which] fire is ultimately a benign and rescuing agent.

In the last concert, the air is symbolized by birds in “A flock descending into the Pentagonal Garden,” a beautiful atmospheric work by Toru Takemitsu, and earth by Mahler’s “The Song of the Earth.”

ArtsATL: And of course, the ASO Choruses continue to play a major role next season.

Mirageas: One of the things that we also learned in the [current] season is how powerful a memory this city still has and affection it holds for the legacy of Robert Shaw. Our very bestselling concerts this season have been all the concerts with the Atlanta Symphony Orchestra Chorus.

We have a rich diet for the chorus going into next season. “Creation/Creator” obviously is at the heart of the season. The “Sea Symphony” is in the fall. The chorus is featured mightily in the great Robert Shaw tradition at Christmas with “Christmas with the ASO,” and the Christmas portion of “Messiah” returns next year. Donald Runnicles has two outings with the chorus: Bruckner’s “Te Deum,” which we’ve never done, so it’ll be an ASO premiere, and the Fauré “Requiem” toward the end of the season.

On the one hand, you might say that this is a season that in one way pulls together things that we’ve always done well. Certainly in the tenure of Robert Spano we did become famous for commissioning American composers. Since the time of Robert Shaw, we have had a great chorus. In our present guise, we have a wonderful balance between the core repertoire that all of our conductors do well and the contemporary music that we make a specialty.