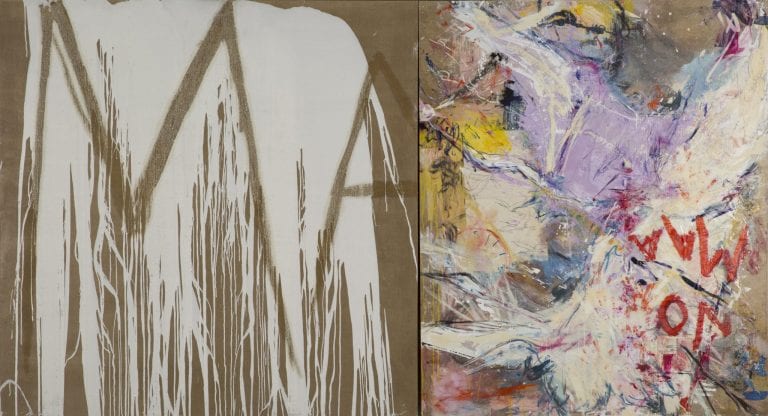 Kirstin Mitchell’s tranquil gradient series and alluring minimalist statements, in a single room punctuated by quirky objects, seem notably different from the complex gestural abstractions by Karen Schwartz that fill the rest of Hathaway Gallery’s expansive spaces. But Schwartz’s Making Sense and Mitchell’s Midnight at the Oasis, both on view through July 11, present art that engages physical process, everyday materials and the traditional medium of painting to elicit human experience.

Schwartz’s large diptych Ma/No Maas! (2016) and her bold Inside Outer Space (2017) introduce Making Sense at the gallery entrance. Hung a few inches apart, each diptych panel comprises linen primed with a medium taupe; but the similarities stop there. Opaque white paint flows from the top of one panel as if poured or spilled, covering its surface with vertical drips. The letters “MA” appear like graffiti, written over all in a slightly darker taupe than the ground. In contrast to the authoritative presence of “MA,” on the other panel “NO MAA” is scrawled upside down in bright red, atop layers of pasted papers, brush marks and splatters of white, lavender, blue and black with red handprints in the lower right. Scraps of paper with sketches of flying cranes, wrinkled and bunched sheets splattered and stained with white, lavender and smeared with shades of blue, red, yellow and ochre form the backdrop for gestural automatism markings that animate the chaotic surface of the “No Maas!” side. The deliberate misspelling of the Spanish phrase “Mas/No Mas!” (meaning “More/No More!”) in the title alludes in the chaotic “No Maas” panel to impassioned youthful rebellion against the staid, maternal authority of the first. Interestingly, the diptych is hung with the “No Maas!” panel to the left (typically read first), and the “Ma” side on the right.

Inside Outer Space (2017) similarly layers torn papers, liquid media, thick gestural marks and fields of paint over the barely visible greyish canvas.  A spectrum of colors ranges from bright pure primaries to tints of pink and aqua and shades of deep burgundy and midnight blue. Thin, translucent lemon yellow drips vie for position with seemingly finger-painted lines in the top center. However, this time there are no words, only white and magenta doodled ciphers and random marks that form not quite recognizable figures.

According to her artist’s statement, the “layered processes of painting” allow Schwartz to give visual form to “unformulated experience.” “Creating art” becomes “a particular manner of thinking.” A practicing clinical psychologist and psychotherapist as well as an artist, Schwartz unsurprisingly employs spontaneous gestures and automatism to explore less-accessible regions of thought and open a nonverbal dialogue with the viewer with surprising, jarring, cathartic results.

Her six-foot-square Blowfish (2017) immediately confronts viewers with its frowning stare, only to dissolve into splashed and splattered fields of red and black paint with contrasting white, black, pink, yellow and orange lines and smudges resembling eyes, faces or simply scribbles upon closer inspection. Linen scraps in the top left of Birds of Prey (2017) resemble a bird or a fighter jet zooming in, and below, in the lower left, a small black form with mottled wings flies off the canvas. White lightening bolt lines in the lower center become feet for the black-eyed, white head and beak touching the upper right edge. Beyond the Pale (2016) offers an overwhelming compendium of two-dimensional mark-making and mediums, recalling so many styles and practices of art that it is truly beyond the bounds of spectator expectations (as its idiomatic name implies).

Side rooms provide more intimate settings for Schwartz’s smaller works on paper, encouraging closer inspection and introspection by the viewer. Her 12” x 12” Infinity Dance (2017) and Necktie (2017) continue ruminations about the infinity symbol that are visualized in her larger Permutations of Infinity (2017) in the main space. In Infinity Dance, the looping black line of the symbol becomes its impression in negative space, flanked by looping pink forms that “dance” into the symbol, and as the name of its companion suggests, infinity also morphs into a “Necktie.” The slightly larger Rubicon (2017) layers torn fragments of rice paper stained and delicately splattered with translucent turquoise over smaller flows and splatters of ochre, red, blues and variations. “To cross the Rubicon” means to continue past the point of no return, perhaps through the infinite spaces of mental processes made palpable by the physical process of creating art.

Two side rooms flank the very back of the gallery. To the right is an intimate “viewing room” with a sofa facing Odalisque on the Verge (2014) propped casually against the wall. Schwartz’s large mixed-media image of a sprawling nude female resembles the abstract nudes of early modernist expressionists such as the Die Brücke artists or the Fauves, and its title refers to the long Western tradition of viewing representations of female nudes that may be on the brink or threshold of climax. As with her other paintings, Schwartz provocatively nudges the viewer to join her exploration of the work’s implications.

On the opposite side, a door leads to a very different kind of space. The title wall of Midnight at the Oasis provides a sample of grey rubbery material with the checklist handouts, for viewers to touch. The synthetic material feels soft and pliant, but not malleable. Rectangular panels line the walls, some covered with emphatically folded synthetic rubber, others with softly painted gradations of color. On the highly polished floor in the center of the space, a yellow and a white orb rest on a white cushion-like form, and in the back corner opposite the title wall, a cobalt blue cube perches on an irregular lump of rough synthetic foam painted white.

Known for provocative feminist performances as “Kiki Blood,” multimedia artist Kirstin Mitchell has shifted the medium and subject matter from her performing body to the experience of the performance environment. According to Mitchell’s statement on the Hathaway Gallery website, as “airy landscapes” her Gradient and Window series “form an infinite horizon line.” Together with similarly sized panels covered by sheets of folded rubber, these landscapes impart a “subtle energy” that can elicit a response from the viewer. The unusual sculptural objects that Mitchell titled Einswein I–VII (2017) add complexity to the otherwise contemplative atmosphere of the space, and in so doing they entice the viewer to participate imaginatively as well as physically (hence the touchable rubber sample).

As information and art become increasingly accessible through digital dissemination, the actual human experience might seem obsolete. In “The Post-Media Condition” (2006), Peter Weibel asserted that every artistic discipline, even old, “non-technological media” such as painting and sculpture, has been transformed by new [digital] media: “The impact of the media is universal and for that reason, all art is already post-media art. Moreover, the universal machine, the computer, claims to be able to simulate all of the media. Therefore all art is post-media art.”

Karen Schwartz creates nonverbal forms of the unformulated, and visualizes invisible content through her process and materials. Mitchell makes environments that physically, imaginatively and viscerally engage viewers. Regardless of whether or not spectators (and readers) will experience their art translated or rasterized into bitmap formats to be displayed on devices, both Mitchell and Schwartz engage human experience through the physical process of artistic creation.