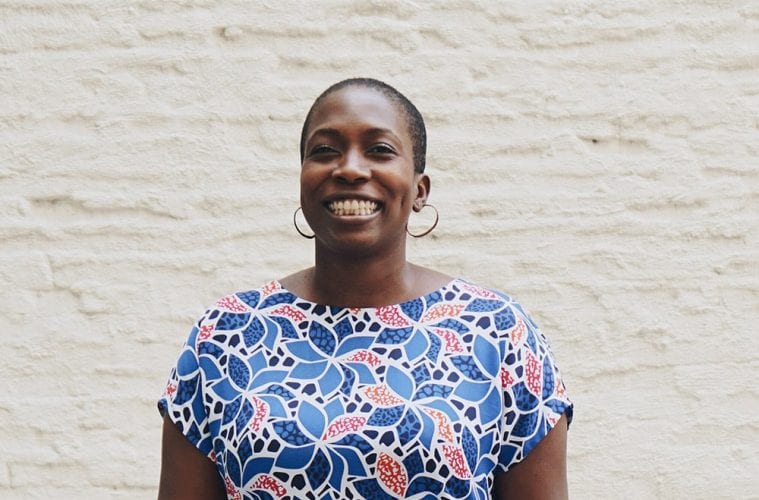 Last Thursday night, The Atlanta Contemporary’s lecture room was filled with avid listeners as Lauren Haynes breezed through a presentation about her career and transition from Studio Museum in Harlem to Crystal Bridges Museum of American Art in Bentonville, Arkansas. Contemporary Cocktails, which happens every Thursday at Atlanta Contemporary, in tandem with the evening’s lecture and other events, creates a relaxed environment for mingling among the city’s art lovers. For almost three years, Burnaway has been inviting art professionals from across the country to mentor would-be art writers as part of their Art Writer’s Mentorship Program. Now in its fifth cycle, the program has mentored dozens of art writers in the Atlanta area. And for this particular event, Burnaway and Flux Projects teamed up to bring Lauren Haynes to the city to mentor emerging writers and visit with local artists. The Studio Museum in Harlem, where Haynes rose from curatorial assistant to associate curator under Thelma Golden’s tutelage.

Lauren Haynes has been an integral part of the African-American contemporary art community, most significantly through her work at the Studio Museum in Harlem. Under the tutelage of director and chief curator, Thelma Golden, Haynes, over the course of just under 10 years, made the climb from curatorial assistant to the associate curator of the permanent collection that houses approximately 2,800 artworks. Haynes also worked on Studio Museum’s renowned Artist-in-Residence program. Her work has impacted the career trajectories of numerous artists who have gone on to have great successes worldwide. At Studio Museum in Harlem, Haynes also curated shows featuring the works of Romare Bearden and Carrie Mae Weems, among several others. Last August she made the leap from all of these accomplishments to Bentonville, Arkansas’ Crystal Bridges Museum.

Harlem is known for its status as a historically Black neighborhood. People traveling uptown Manhattan venture to Harlem to see specifically Black things. They may go to Sylvia’s for soul food, the Apollo Theatre for a concert, and the Studio Museum in Harlem for artworks by Black artists. Although the air of the neighborhood is changing a little bit, as buildings become renovated and people of divergent cultures move into the neighborhood, Harlem is still predominantly Black. So how does the curator at a museum for Black art fare in Bentonville, Arkansas? According to Haynes, Bentonville is not as homogenous as one may think. There are several major corporations headquartered there with diverse populations, but she did have to broaden her perspective to be inclusive for a larger sampling of audiences, artists and art. The Crystal Bridges Museum of American Art in Bentonville, Arkansas, where Haynes is now chief curator.

And demographics weren’t her only adjustment — there was scale to consider too. The Studio Museum hosts an average of 100,000 visitors a year. The notably larger Crystal Bridge Museum of American Art sees 600,000 visitors a year from within the state and neighboring communities. Needless to say, the Bentonville community is very invested in the museum. Compared to the Studio Museum, which has accumulated a permanent collection of 2,800 artworks over 40 years, Crystal Bridges, which opened in 2011, has already amassed 2,800 artworks in their permanent collection. In addition to catering to contemporary art lovers, Haynes has to be sure to appease the patrons who attend the museum with matters concerning everything from the movement of furniture to the artwork displayed. Haynes is certainly dealing with a larger population of concerned patrons who don’t mind voicing their opinions on the museum’s operations, and she’s had to assuage their desire while still performing the job she was hired to do.

In comparison to the Studio Museum’s Black staff, Haynes is one of a few Black administrators at Crystal Bridges. But being one of the only is not new to Haynes. She grew up in a predominantly White community and attended a predominantly White college, Oberlin College in Ohio. It wasn’t until she moved to New York that she was in the midst of a Black community. Although her work at the Studio Museum allowed her to exhibit and foster the best in Black art, Haynes has been challenged to refer to not only her knowledge of Black art, but a more extensive art history knowledge for her current position at Crystal Bridges.

As Flux Projects’ inaugural curator in their Visiting Curators series, it’s Haynes’ objective not only to help Atlantan artists gain exposure but to stretch her own perspective. According to the organization’s website, the goal of the series is “to generate exposure and opportunity for area artists and cultivate broader recognition for Atlanta’s vibrant and innovative arts community.” In addition to hosting lectures for the Atlanta community, the curators who visit the city will conduct studio visits with local artists, possibly offering them feedback, as well as opportunities. Haynes seems ready for the challenge the position at Crystal Bridges has set before her. Her willingness to make herself available to the Atlanta community exemplifies her commitment to the contemporary art community at large.