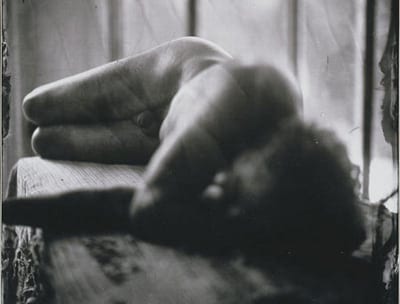 Pain, writes Rainer Maria Rilke, “tolerates no interpretation. Nature is completely unaware that it causes us pain … and because nature does not take our consciousness into consideration, it becomes our task not to dissolve pain into our consciousness. It appears that one has to let pain burn itself out wherever it happens, without trying to understand any matters of the mind or life in the light of its flickering blaze.”

For Rilke, physical pain is the presence within us of a force of nature greater than us and indifferent to us. To attempt to interpret pain — to hitch its incomprehensibility to human purposes, to transfer its ruthlessness to the side of inspiration — is to misunderstand it categorically. We endure pain and sometimes come through it, but our survival, for Rilke, does not redeem our suffering, or transform it into something other than what it is.

Sally Mann, whose riveting photographs of her husband’s physical degeneration are on view at Jackson Fine Art through October 29, is occupied with just such existential concerns: physical pain as it ruptures and then manifests faithfulness to life; love as it alternately diminishes and magnifies awareness of our mortality. To say that Mann’s husband is the subject of these pictures is both true and misleading. Her deeper subject is the struggle to grasp how human virility — beginning from the body of the one she loves — comes to exist in damaged and unrecognizable forms, requiring inventive acts of searching to reconstitute the greater unity without which human flesh would be simply the raw evidence of an absurd universe.

These photographs synthesize three major currents of Mann’s work over the past 30 years, some of which is also on view in the gallery. She came to international prominence with narratively complex images of her own family that frequently explore eros and death in childhood (“At Twelve” in 1988 and “Immediate Family” in 1992). She then moved to a series of images of putrefying corpses and carcasses in natural settings, including several made at a research facility for studying human decomposition (“What Remains,” 2003), and brooding landscapes that attempt to reckon with the persistence of loss in Southern consciousness (“Deep South,” 2005).

For much of the landscape work, as for the new work of her husband, Mann has used the antiquarian wet-plate process, a laborious and technically difficult medium in which the photographer mixes a collodion emulsion, coats glass plates with it and exposes it in a large-format camera while still wet, then processes it immediately after exposure. Many of the most magisterial American landscape photographs of the 19th century were made using this process: Timothy O’Sullivan’s pictures of the Southwest and Carleton Watkins’ mammoth plate studies of California and the Pacific Northwest, among others.

Mann prizes the wet-plate process not for its optical detail but for the imperfections of which it is uniquely capable, much as other photographers since the 1970s have cherished the manipulability of the Polaroid process and the Photo-Secessionists (Mann’s kindred spirits from 100 years ago) embraced gum-bichromate. While Mann cannot be credited with reinventing wet plate, she has explored its potential more fully than any other American artist for many decades.

In one way or another, all the images in this show raise the question of what a photographic picture “should” look like: it is immediately apparent that for Mann, optical sharpness claims only a share, often a comparatively small share, in lens-given images. Pictures, for her, occur when affect somehow comes to reside in the churn of photography’s optical and chemical effects. There are methods for divining this affect within the creative moment, ways of coaxing it forth from the energy between artist and sitter, but there is no formula for claiming it, and no photograph that really “captures” it by allowing us to witness it in some way.

Mann’s explorations of her husband — I am loath to call them portraits — begin from visual irresolution and retain disturbance on their surfaces and in their depths. On their surfaces: Mann courts all manner of blemishes and smirches for their expressive potential, creating boils and abscesses from the photographic process itself, which surround and sometimes attach to the body (“Discobolus,” 2006, and “Hephaestus,” 2008). In their depths: her pictures hold light in keen but contingent ways, much as we might say that glass “contains” whatever light and color shines within and through its particular translucency (“Ponder Heart,” 2009, “Time and the Bell,” 2008, and “Semaphore,” 2003). The imperfections and uncertainties of a fickle photographic process are, for Mann, absolutely necessary to the emotional understanding for which she seeks form. If she were a sculptor, I would expect her to work in warm, opalescent wax filled with debris and bugs, impressible and receptive to the heat of the hands.

In Mann’s “Speak, Memory” (2008), whose title is presumably taken from Vladimir Nabokov’s masterful autobiography, we encounter a figure lying supine on an ambiguous surface of rumpled textiles. Viewing him from somewhere near his feet, we seem to look up at and down on him at once. The figure is lit strongly from one side only: his rib cage is articulated with a soft distinctness owing to the gravity that pulls his torso from below. Shadows puddle in his chest cavity, and his navel is a soft disc evenly split between pure white and black. The photograph, like almost every other in the series, abruptly truncates the body: here his left arm, splayed out to the side, is cropped at mid-biceps, and his torso is cut just below the pelvis. His head is described only by the implication of neck and chin, and a mysterious diagonal beam links the upper edge of the frame to a point behind the chin, perhaps the figure’s unseen eyes.

Without depicting illness directly, this body is overtly corpse-like. It is also suffused with the aliveness of deep relaxation. The visual reference to the suffering Christ is inescapable, but to my eye the figure is more like the moon than the messiah: just as we know that the moon is a sphere and not a flat disc, though we see only half of it, darkness is the inferential side of light’s completeness, and there are many aspects of life turned away from rather than toward us.

To be present to the suffering body of her partner is, for Mann, to join affliction and bliss, and possibly to gain a share in the knowledge of loss as an abiding aspect of love. Her effort is neither to invite grief into our midst prematurely nor to console us in advance, but to approach mortality as a gentleness in our midst. She takes the suffering of her partner as her own task, and so doing moves his pain by degrees into a soul-force that others can behold. Few photographers attempt to train the human phantom so courageously, and few succeed as she does. Sally Mann understands: we are not at liberty to presuppose that death yields merely abject wisdom, or that the demise of the body closes down compassion, beauty and splendor.

Jason Francisco is a photographer who works from Philadelphia, Atlanta and San Francisco. His work can be seen at www.jasonfrancisco.net.