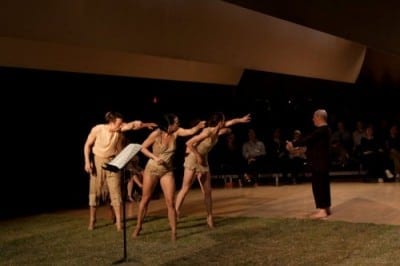 Choreographer Lauri Stallings, the most politically savvy artist in Atlanta, has gained attention and a kind of cultural authority by pointing out what is passé with our traditions and lazy habits. With the philosophical clarity of an insurgent candidate running for office, she is rapidly remaking the local scene to her tastes. Thus far, few have wanted to resist.

Her vision of the arts — partly derived from French theorist Nicolas Bourriaud’s “relational aesthetics” — includes the notion that the proscenium theater is a failure of high culture. The Fox Theatre and Symphony Hall are examples of traditional venues where the performers are on stage and the audience sits and watches, passively, from what is essentially a different room. By this view, an old theater is an absurdity and a dismal relic, out of place in today’s world of social media and heightened interactivity.

Thus Stallings’ gloATL has danced in the streets and in a shopping mall, at a MARTA station and in the round at a dilapidated cotton mill. But there are still a few advantages to those old formal concert spaces, not least the opportunity to hook up with the performers who inhabit them. 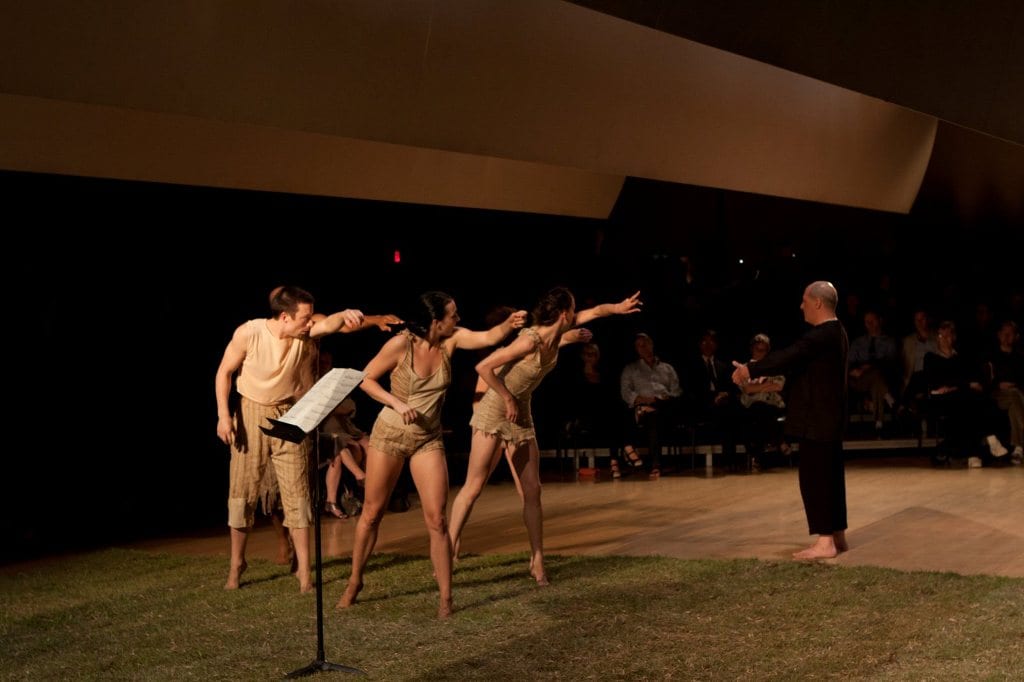 Stallings’ latest creation, “Maá” — “earth” in Finnish — was composed as a ballet by Kaija Saariaho and premiered, in Finland, in 1991. In two performances over the weekend, gloATL made its Symphony Hall debut with frequent collaborators Sonic Generator and, for the first time, Robert Spano, the maestro of the house. (Credit must go to Sonic Generator’s artistic director and percussionist Thomas Sherwood, who knew the score, initiated the complex collaboration and spent a huge portion of the new-music ensemble’s annual budget on it.)

On a local scale, the ascendancy of Stallings’ gloATL in Atlanta might have a parallel with Serge Diaghilev’s Ballets Russes in Paris in the early 20th century: a dance impresario steps into a leadership void and pushes forward; all the other arts, and major artists, follow happily — glad that someone is finally willing to take charge. She is the only artist in Atlanta to bridge supposed cultural barriers, collaborating meaningfully with hip-hop’s Big Boi, a star in the streets, and Spano, whose acclaim resonates only within the concert hall.

Getting Spano to conduct these performances was as much a flexing of cultural muscle as a guarantee of musical quality. Spano has been a steady champion of Saariaho’s music, programming her at key career moments, such as his New York Philharmonic debut eight years ago.

In placing Spano almost at the center of the ballet, with dancers often orbiting around him, and by choreographing his Zen-master moves (unrelated to conducting), Stallings showed a flair for the potent gesture. Spano hasn’t taken this many risks since his days with the adventurous Brooklyn Philharmonic, a job he held before coming to Atlanta. 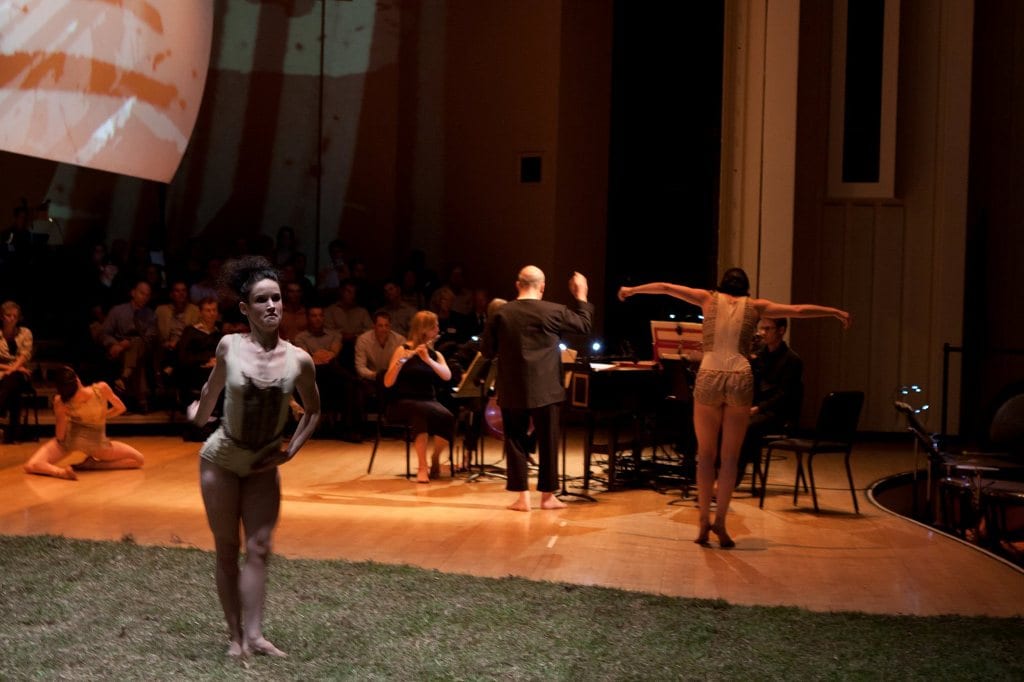 For “Maá” the proscenium arch of Symphony Hall was ignored; the space was transformed into multiple levels and surfaces. Members of the audience sat in the auditorium, as usual, but also on risers on the stage, at odd angles. There was novelty everywhere: to get to our seats, we had to walk across fresh green sod — the “Maá” of the title made tactile. Lighting and projections (by Adam Larsen, Bruce Harlan and David Balliet) and low-hanging acoustical panels further altered the landscape, as did the amplified music, engineered in crisp surround-sound by Jason Freeman and students from Georgia Tech. (Performance photos by Thom Baker.)

The evening started before the starting time with dancer Nicole Johnson, her feet muddy, emerging from the wings, looking around as if it were her first day above ground, blinking at the bright lights. To the opening scene, “Journey” — a collage of electronically enhanced sounds — Spano appeared barefoot and in a dream state, escorted by a dancer, and one by one the seven musicians took their station.

“Maá,” subtitled “ballet in seven scenes,” has no plot, no narrative, although its tight structure (where each scene has seven parts) makes it feel as if there’s a story lurking beyond consciousness. In recent years, composer Saariaho has been acclaimed internationally for her gorgeous, bittersweet Impressionism, where timbre and atmosphere supplant harmony and melody. But “Maá” is from 1991, when she was emerging from an “Ears Open” style (along with her classmates Magnus Lindberg and Esa-Pekka Salonen) that cheerfully appropriated everything modern and cool, from weird “found” sounds to angry industrial clashes to bursts of pure elegance.

Stallings didn’t force a storyline onto “Maá” but imagined the ballet as a series of nocturnes. Her Gaga-inspired movement language, where the whole body is engaged and which often resembles structured improvisation, is remarkably suited to Saariaho’s substantively freeform language. Her dancers’ faces are key to their emotional expressions; they look you in the eye. No wonder she performs in spaces where the audience is just an arm’s length away, or closer.

For a scene called “…de la Terre (Door),” Helen Hwaya Kim stood alone to play a haunting violin solo, backed by electronic swashes, and the dancers paired off into a midsummer night’s dream. If the scene was about couples and relationships, it conveyed no easy messages. They struggled and pushed, the lifts and jumps more brusque than “Swan Lake” balletic. It was tense, all-enveloping and often riveting. In most of Stallings’ choreography that I’ve seen, the women are more to the point, more communicative and integrated, than the men, who sometimes appear to be tokens of gender diversity. “…de la Terre (Door)” put those impressions aside, perhaps elevating the troupe as a whole. 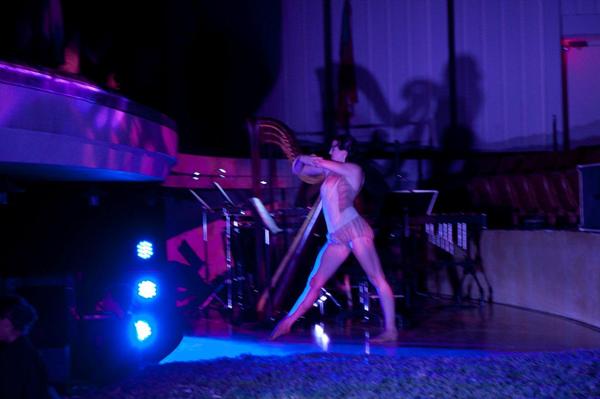 One drawback of relational aesthetics, flipped into a virtue, is that not everyone can see everything all the time. By design, audience members will come away with different images. I sat on stage risers and missed the action for “Windows,” done as a creepy witches’ Sabbath in the sunken (and grass-covered) pit. The dancers’ shadows loomed huge on the auditorium walls.

The evening included a new scene, added to Saariaho’s seven. “Physical Pause” had Spano “conducting” the movements and stomps and body cacophony made by dancers from the Kennesaw State University Dance Company and apprentices from gloLAB. When a dancer slipped into the conductor’s spot up front, with desperation on her face, Spano gently put an arm around her and guided her away. Such fraught meaning! Perhaps nothing in “Maá” was as poetic or achingly lovely as the best moments from recent gloATL events, such as “Chapter III.” But where past performances sometimes had the feeling of exquisite vignettes strung together, “Maá” offered the dance troupe the chance to work in the centuries-old tradition of a cohesive ballet score. Stallings and company took it, and did some of their most compelling and satisfying work to date. 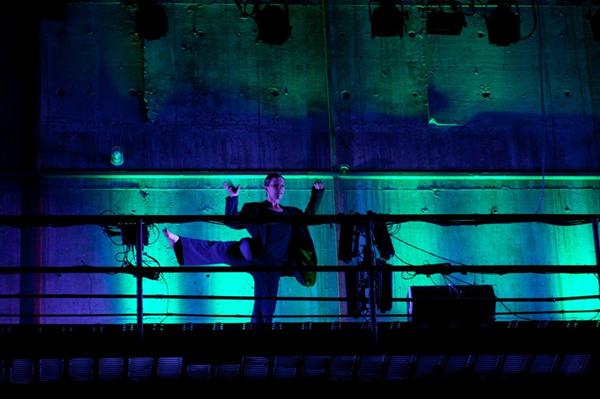