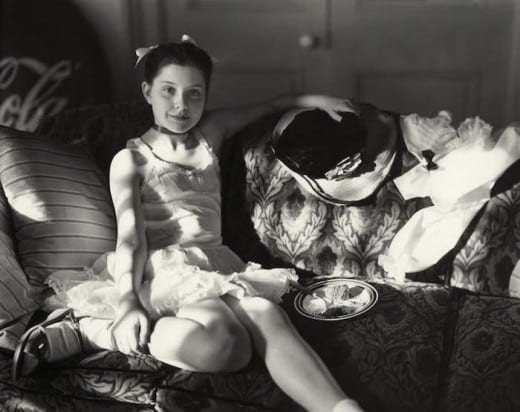 Sally Mann: Untitled from the “At Twelve” Series (Rebecca and the Hose), 1983-1985.
Image copyright of the artist and courtesy of Gagosian Gallery and Jackson Fine Art.

American photographer Sally Mann is known for her elegiac images born of intimacy and abandon. Recurrent themes of family, home, her life-long love affair with Lexington, Virginia, and the haunted swelter of the American South all boil to the surfaces of her black-and-white photographs.

Such themes aren’t so much addressed, however, in Mann’s images as they are dug up by the root in her own first person experience. Some would call this approach simply personal, but for Mann, the river runs much deeper.

Jackson Fine Art presents a small selection of photographs from the 1988 series At Twelve, published just prior to Mann’s most groundbreaking and controversial series, Immediate Family (1992), an intimate portrayal of the artist’s home life with her young children at their farm in Lexington.

Among her foremost bodies of published work, the original 37 images of At Twelve tap the complex and often unseen interior complexities of 12-year-old girls just at the tipping point of their long passage to womanhood. The current exhibition features seven 8 x 10 platinum photographs from the series; an additional 17 prints are available for viewing upon request.

Mann has a unique talent for posing her subjects in a manner that activates the deeper recesses of their personalities, like fiction that tells a truer story. Yet each girl remains her own riddle, her naiveté cracking amid the onset of self-possession. But not quite.

Each is caught in the web of her own home, of Virginia, of her family and herself. While the gauntlet of puberty is typically characterized by its awkwardness, these girls telegraph what lies underneath.

Some read unquestionably as children. Others boast a maturity well beyond their years. The camera ignites an inner fortitude in some, their gaze a heavy shield of skepticism and survival: “They look hard at the camera because they are used to looking hard at people and things,” notes writer Ann Beattie in the introduction for the book version of At Twelve. For others, the camera might as well be an all-seeing mirror of inquest and scrutiny. Many fall somewhere in between, unsurprisingly, or possess all of these qualities all at once.

The result is that your eye doesn’t exactly know where to land emotionally. But it’s this uncertainty that leads you further down the rabbit hole of their hidden worlds.

In Untitled (Rebecca and the Hose), a smartly preened girl stands facing the camera, one leg crossing the other, in a pose of sophistication and autonomy. Yet, a hose wielded by one of the two younger looking boys flanking her wrangles her in a loop on the ground as if she were a bull in a rodeo — captured before having ever conceived of the notion of self-possession.

Whether innocence has been preserved or lost isn’t necessarily the most relevant question when viewing the show. No matter how naïve they may be, locking the girls within what Mann refers to as our “cult of childhood innocence” negates other layers of awareness they possess.

Instead, the responsibility is handed to the viewer to reconcile what he or she imagines a 12-year-old child should look like versus what is revealed as a much more nuanced reality. Sally Mann: Untitled from the “At Twelve” Series (Lithe and the Birthday Cake), 1983-1985.
Image copyright of the artist and courtesy of Gagosian Gallery and Jackson Fine Art.

Young Lithe in Untitled (Lithe and Birthday Cake), for example, reads of a different era. She boasts the confrontational gaze so startling in Édouard Manet’s Olympia, who she resembles in both pose and adornment. She is nothing less than a prize and is well aware of it, even if just for the moment. Does her pose reveal a certain sexual awareness? No, not really. But might she have a slight inkling of her own prowess? Perhaps.

The near opposite is true in Untitled (Julie, John and Dollhouse), where the girl in question, having clearly outgrown her life-size inhabitable dollhouse, stands at its threshold under the arm of her presumed father. She looks longingly, even forlornly, at the photographer as if bound to her childhood by the grasp of the man who stands eerily in the shadow.

In some, the girls’ vulnerability is held in balance with fearless intensity, which reads as both postured and authentic. It shows us the contradictory nature of their interiors — who they are versus who they want to be, or even further, who they’re allowed to be. Sally Mann: Untitled from the “At Twelve” Series (Theresa and the Tattooed Man), 1983-1985. Image copyright of the artist and courtesy of Gagosian Gallery and Jackson Fine Art.

This is especially true in images such as the former as well as Untitled (Theresa and the Tattooed Man), where tension created by the physical closeness of the younger girl and rough-and-tough man, as required by the pose, is especially palpable.

The problem with some interpretations of Mann’s work — namely the controversy around the handful of Immediate Family photos that show her children nude — is that some reduce her photographs to an objective interpretation based on a singular historical, sociological or symbolic correlation. Wasn’t Walt Whitman correct to say the self is “large and contains multitudes?”

Like people, photographs should be offered the necessary space to be the immense intellectual, emotional and psychological patchwork universes that they are.

It’s unfortunate that the images sit behind the gallery flat files in an office that doubles as a viewing room. One wants the luxury of intimacy to view such intimate photographs.

The exhibition runs parallel to the recent release of Sally Mann’s personal and epic memoir Hold Still. Sally Mann studied literature and creative writing in college, and it certainly shows. Reading her memoir proves Mann’s talent for photography rests in the breadth and depth of the great well within her, which she makes accessible through poetic acuity of language.

While some hold true that who an artist is should be kept separate from the content of his or her work, it’s a gift when learning more leads to an even greater respect for both the artist and her oeuvre.