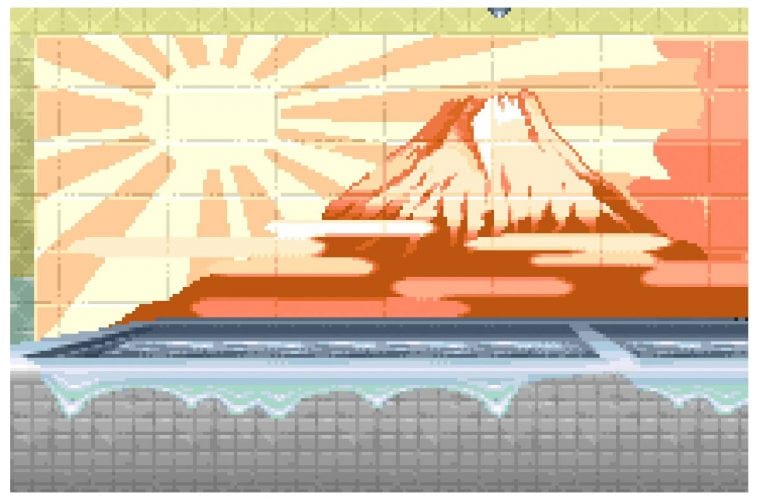 An archaeological survey reveals culture from fragments, and Ashley Anderson’s “Art-Historical Excavation” of images of Japan’s Mt. Fuji (The 101 Views of Mt. Fuji: An Art-Historical Excavation of Early Gaming) pulled from video games achieves this same end. Game design and aesthetics change over the years. Anderson’s Fuji images show a range of game styles and designs, from the signature 8-bit stylings of 3rd generation games to the photorealism that evolved in the generations that followed. This ‘archaeology’ of gaming aesthetics is a conceptual framework while Anderson’s consuming passion for game images and energy for the subtle transformation of them—with Fuji acting as a central axis or divining rod—are the absorbing interests of his project.

Fuji which “for unnumbered generations had shone in its solitary attitude as a symbol of the soul of Japan” (Binyon & Sexton, Japanese Colour Prints, 158) was famously depicted in two series of woodblock prints by Katsushika Hokusai (葛飾 北斎, 1760 – 1849). Ashley’s brilliantly conceived series plays on Hokusai’s. Whereas the latter’s prints presented Fuji from all angles and contexts, Anderson’s inkjet prints show views of Fuji from across the video game world: a similar tour of Japan with Fuji as a visual pivot.

Fuji appears most frequently as a landscape element in the game imagery, but it also shows up in many image-in-image forms: posters in sushi shops, hand fans, bathroom tiles in a spa,a racing flag, and so on. Many of these images are replicas of images of Fuji that appeared in Hokusai’s prints. Thus, multiple layers of imagery and identity interplay in Ashley’s series: the viewer in the gallery, the viewer in the game, Fuji ‘actually’ in the game, Fuji represented in the game, Fuji represented in Ashley’s prints, and so on. Too, the series is a repetition of the most common means of mass-produced images for two eras: woodblock prints for Hokusai’s, pixels for ours.

Many images are derived from several versions of the same game. This is reminiscent of the fact that the more successful woodblock prints (i.e., those that sold) were also made from a series of blocks. As blocks wore out, new ones were cut. In Anderson’s version, successful games produced sequels and progeny, each with their own Fuji images.

Anderson has achieved an astonishing level of detective work in identifying the images—often Fuji is no more than a handful of pixels, leading to images that more resemble Mondrian than Hokusai.

Intentionally or not, some game images partake of Hokusai’s frequent use of strong foreground elements framing a distant Fuji.

Most of the images are heavily processed—not simply screen captures—although only the most deeply knowledgeable video gamer could tell the difference. Somewhat like a video game, in which players move from level to level, each a slightly different ‘world’ or story, Anderson conceived the exhibition in terms of 7 groups of 13, each group built on a (largely indiscernible) narrative.

One is impressed both by the conceptual strength of Anderson’s project, but also by the purely visual beauty and the variety of the series. If there is a flaw, it is echoed in a criticism brought against Hokusai’s series: “Anyone examining his total oeuvre often receives an impression of over-abundant production, of indiscriminate energy and too little selectivity.” (Richard Lane, Images from the Floating World, 170). The sum effect of concept and images, however, is stunning, a marvelous rethinking of two centuries’ old art in thoroughly modern form and the first (as far as I can discern) instance of a survey of landscape imagery in video games. –Jon Ciliberto

An important musical historical marker was released earlier this month as part of the Robert Shaw Centenary celebrations by the Atlanta Symphony Orchestra’s recording label, ASO Media (CD-1007), an unedited broadcast recording of Beethoven’s Symphony No. 9 from Robert Shaw’s final performance as ASO music director on May 21, 1988 at Symphony Hall. It serves as a significant missing link in the maestro’s recordings of the great choral-orchestral literature. While there did exist a recording by the ASO and its Chorus, led by Shaw, on the Pro Arte label, it was an inadequate performance and, technically, a poorly engineered recording. 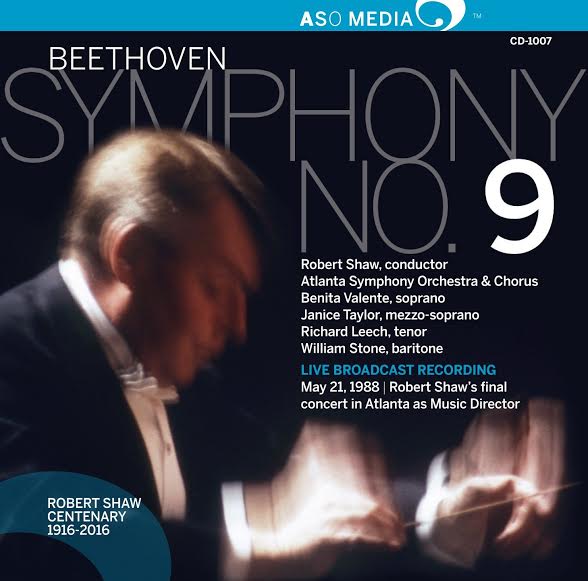 While in the midst of restoring and digitally archiving hundreds of analog reel-to-reel broadcast-ready recordings from decades of ASO concerts, multi-Grammy-winning producer/engineer Robert Woods made special note of this particular recording and its quality, and alerted the ASO. Behind the scenes, plans began to release this unedited live performance of Symphony No. 9 on a CD, a project essentially kept a secret until it was ready for release.

For audiophiles, the process and technology involved in the restoration is of interest. The original master was recorded for broadcast by audio engineer Bill Bailey on an Ampex machine in two-track at 7.5 ips on Ampex 406 tape, dbx encoded. The archival transfer was done by Robert Woods (Sonarc Music) on an Ampex ATR-104 machine with dbx through a Prism Dream AD2 analog to digital converter and mastered by Michael Bishop (Five/Four Productions, Ltd.) using Five/Four REVEAL SDMTM Technology on a Prism Sound SADiE 6 PCM Workstation.

It is, of course, live and unedited, but this recording possesses few performance bobbles and is essentially absent audience noise. Shaw’s lean, muscular and forward-moving approach to Beethoven is present. And while one might wish for more warmth and elegance from the first and third movements, and a slightly less frenzied scherzo, the final choral movement simply makes the disc with the signature stamp of Shaw. The resounding baritone voice of William Stone sets the mood with his invitational recitative, with the rest of the quartet ably comprised of soprano Benita Valente, mezzo-soprano Janice Taylor and tenor Richard Leech. As for the ASO Chorus, it puts forth a thrillingly high-energy performance. Despite the fact it was originally an analog recording intended only for radio broadcast, this welcomed historical CD is certainly due a place in every choral director’s reference library. – Mark Gresham 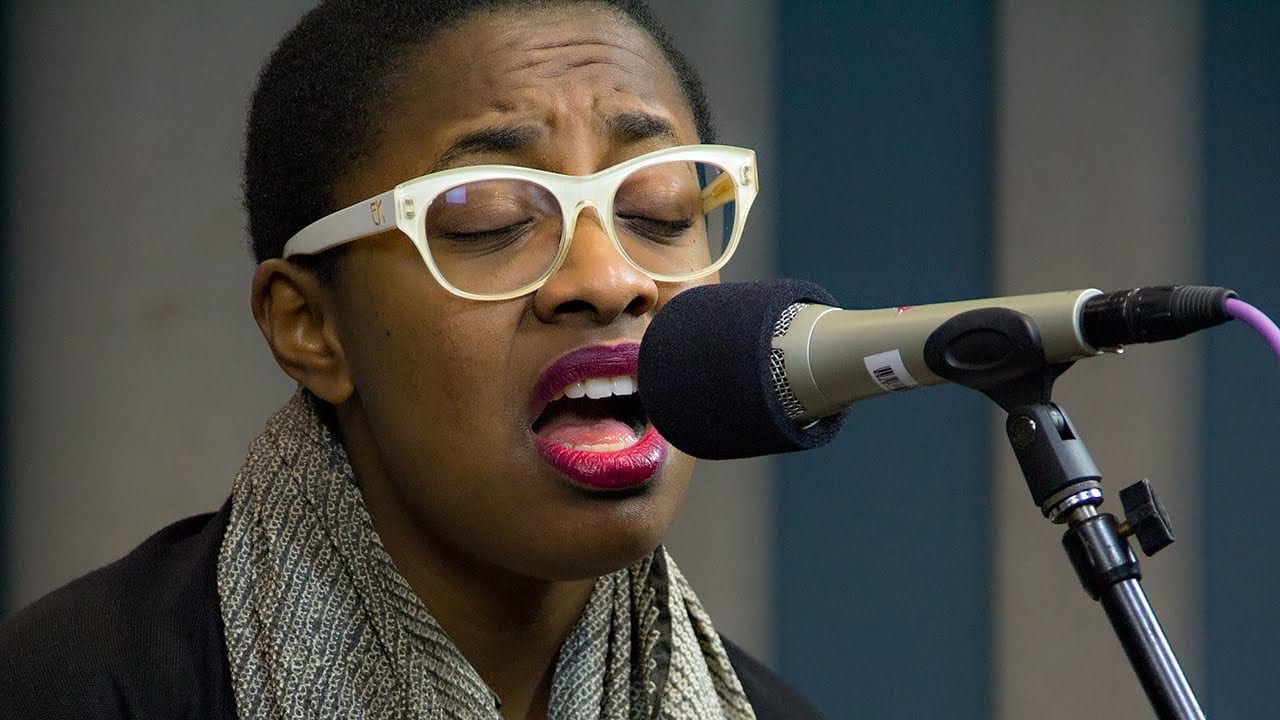 Halfway through Cecile McLorin Salvant’s Saturday performance at the Rialto Center for the Arts, it becomes clear she’s playing a game. She is singing with spellbinding conviction, but Salvant is toying with each tune — elongating words, clipping syllables, pinching her tone, swooping down low for deep, resonant notes and then switching to a breathy whisper with barely a hint of vibrato. Salvant, who has internalized the rich history of female jazz singers, has a vocal style that incorporates brilliant, fun theatricality into each note. Salvant’s set, which featured Sheldon Harnick’s “The Ballad of the Shape of Things” and Bob Dorough’s “Nothing Live You Has Ever Been Seen Before,” eschewed typical jazz standards heard ad nauseam. These songs selected were, on the whole, witty, and the great majority centered around love — first loves, true loves, love gone bad, love that’s so good it’s bad.

Her usual accompaniment, a trio led by the brilliant pianist Aaron Diehl, last appeared with Salvant in Atlanta during the 2013 jazz festival. She was a mostly unknown entity then, relegated to a subordinate stage. Saturday, the rhythm section of pianist Adam Birnbaum, bassist Yasushi Nakamura and Pete Van Nostrand, gave Salvant plenty of musical support, but the collaboration and intensity she has cultivated over the years with Diehl’s band was absent. In a city usually bereft of touring jazz options, listeners had to weigh Salvant’s show against an appearance by the Julian Lage Trio at Spivey Hall and the Atlanta Jazz Party. While scheduling conflicts do arise, there’s such little opportunity to hear national jazz musicians that these double- and triple-bookings are a shame. Regardless, it would be hard to persuade the Rialto audience that they made the wrong choice. – Jon Ross 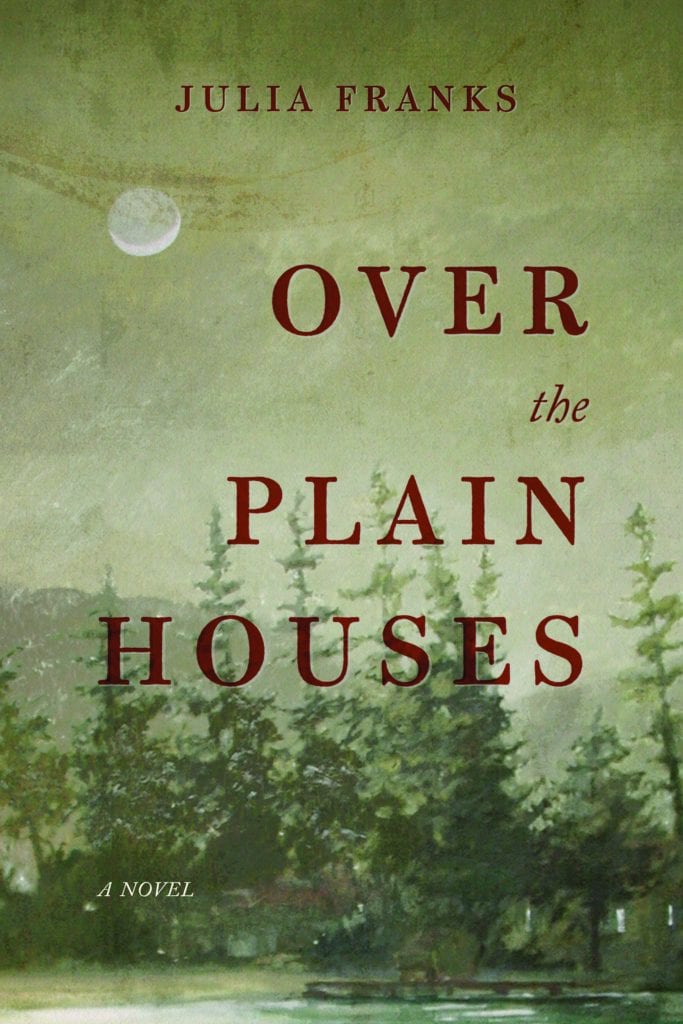 Over the Plain Houses by Julia Franks

When Brodis Lambey’s life is spared in a logging accident, he sees the light. But the log-driver turned Christian fundamentalist preacher man clings to his bible, faith and family with such ferocity that he completely loses touch with the divine.

His wife, Irenie, is cut from a different cloth.

Her recognition of the amazing grace that infuses their Depression-era Appalachian hamlet in rural North Carolina is absolute. Nothing escapes her attention— not the chirping of crickets, trees on the verge of budding, nor the buffeted flap of hawks wings. To the contrary, these tender mercies allow Irenie to live in a state of constant, quiet gratitude. She personifies the sacred, while her husband embodies the profane.

Julia Franks’ debut novel, Over the Plain Houses (Hub City Press, 208 pp), examines how one couple is forced to negotiate their irreconcilable differences. And though the theme has been mined by writers from Euripides to Anne Sexton (whose poem, “Her Kind” inspired the title of Over the Plain Houses), Franks’ thoroughly Southern variation ranks as a significant contribution to the canon. – Gail O’Neill

Julia Franks will discuss “Over the Plain Houses” at the Decatur Library Auditorium on Wednesday, May 4 at 7:15 p.m. 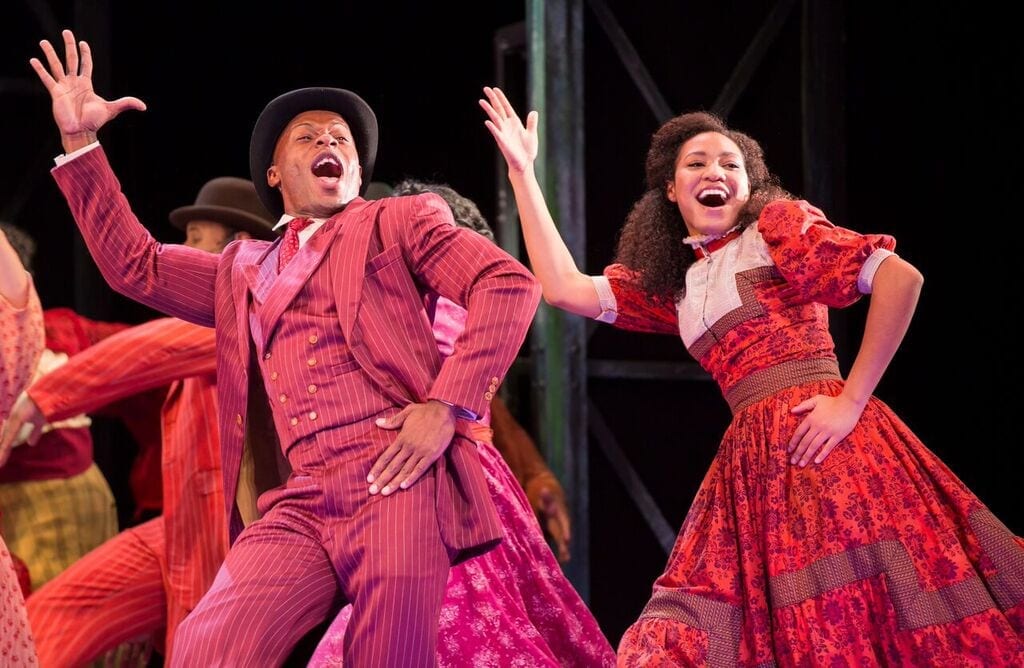 A touring version of the 1998 Broadway musical Ragtime made a brief stop last weekend in Atlanta for two performances at the Cobb Energy Performing Arts Centre. Reviews of the original Broadway show often noted that the story and songs could be overshadowed by the elaborate and dazzling production elements (the Broadway production apparently featured fireworks and a Model T), a problem that’s seemingly alleviated here by a more pared-down, mobile show which places the emphasis back on the narrative and music. Based on E.L. Doctorow’s 1975 novel that follows the stories of a diverse group of characters at the dawn of the 20th century (including some appearances by real-life historical figures such as Harry Houdini, Henry Ford and Booker T. Washington), the book by Terrence McNally effectively tells a complicated set of interrelated stories, weaving together the strands of multiple narratives about the members of three very different families. Music by Stephen Flaherty is occasionally overly-sentimental, repetitive and nostalgic (the touring production uses recorded music, which doesn’t help things). And Doctorow’s tale, which conceptualizes the turn of the last century as a time of crisis, modernity and revolutionary fervor, is likewise occasionally buried under a general flood of nostalgia and sentimentality. Still, the show, which continues on its nationwide tour through mid-June, is saved by its engaging storytelling, lively numbers and some fine performances from the cast, including Matthew Curiano and Kate Turner in the central roles of Tateh and Mother. – Andrew Alexander