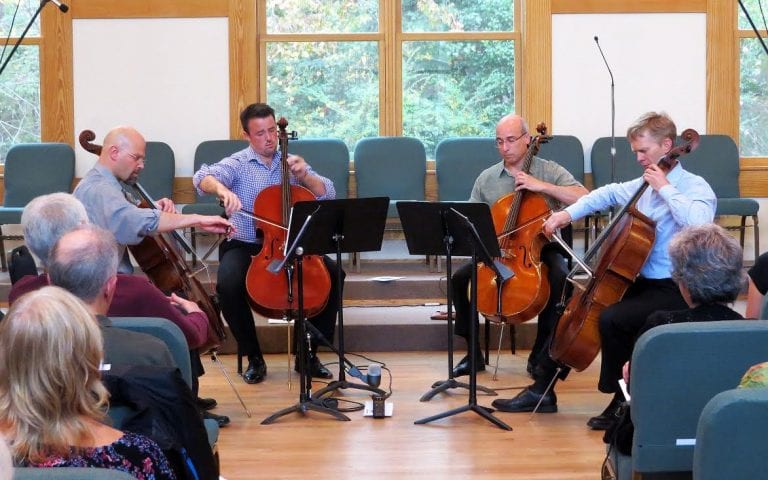 One of the occasional joys of classical chamber music, where an ensemble or concert series has no fixed roster of players, is the ability to hear programs that feature unusual or less heard groups of instruments. This past Sunday was one such instance, in which the Riverside Chamber Players performed an engaging program of ensemble works centered around the cello.

The season-opening concert kicked off with a world premiere, Michael Kurth’s nascent String Quartet No. 3. Kurth, an ASO contrabassist who is Riverside’s composer-in-residence, originally scored his piece for a standard string quartet, then transcribed it for violin and three cellos so that it could premiere on this particular program. As an interesting demo in advance of the piece, Kurth and the four musicians playing it — Bruns, Carpenter, Dallow and Ritchie — demonstrated a number of examples of how chords sound when scored in different voicings for the odd combination, demonstrating effectively the richness of texture and balances it can afford.

Riverside has recorded an entire CD of Kurth’s music, and like those pieces, this new string quartet comes across very well to the average listener as well as a critical expert. The slow opening movement has a kind of luminous character and harmonies that quickly say “American” in an almost mid-1950s kind of heartfelt way. In the rest, engaging rhythms, extensive use of pizzicato and more of the initial lyrical and harmonic language reaffirm Kurth as a genuine populist in aesthetic sentiment rather than an ivory-tower academic composer.

Aside from his many compositions for Riverside Chamber Players, Kurth has gained broad attention as a composer through his works for his other, larger home team, the Atlanta Symphony Orchestra. A complete CD of his orchestral works, recorded by music director Robert Spano and the ASO, is due out in 2019. A recorded movement of one of those works, “TOES,” from Everything Lasts Forever, was used later on Sunday at an exhibit of art by the late Atlanta graffiti artist Harrison Keys, who signed his work with the public moniker TOES. It was the visual whimsy of one of Keys’ pieces of graffiti that inspired that music, before Kurth even knew who or what the signature TOES represented.

For the program’s second half, cellist Daniel Laufer joined Carpenter, Dallow and Ritchie in performing a clutch of one-movement pieces for cello quartet, all arranged by United Kingdom-based cellist James Barralet. Barralet’s practical experience with the instrument obviously helps lend a deep understanding of how to write well for it.

“I have wanted to perform cello quartets since I started this series 16 years ago, and I’m really pleased we are finally doing it,” Dallow said. “It’s a great chance to not only play with my amazing colleagues, but also it’s a wonderful challenge for all of us to cover the four voices usually made up of higher strings. The cello is such a beautifully expressive instrument with so much range, and we can cover all the voicing as though it was a traditional string quartet with just the one instrument.”

Among these arrangements were a pair of elegies: Samuel Barber’s famous “Adagio” for strings, which Dallow dedicated to the memory of the victims of the mass shooting that killed 11 people at the Tree of Life Synagogue in Pittsburgh last month, and “Nimrod” from Edward Elgar’s Enigma Variations. In between came “Pur Ti Miro,” drawn from the baroque opera The Coronation of Poppea by Claudio Monteverdi, in which a kind of “bromance” exchange could be heard between the parts played by Dallow and Ritchie.

The eclectic mix of arrangements also included Carlos Gardel’s 1935 Argentine tango, “Por Una Cabeza,” which found a new height of popularity in film during the early 1990s: for the tango scene in Martin Brest’s film Scent of a Woman (1992), in the opening scene of Steven Spielberg’s Schindler’s List (1993) and in James Cameron’s action spy film True Lies (1994). That slinky spy theme capped off the afternoon with Barralet’s fun arrangement of the “Theme from Mission Impossible,” for which the quartet, though indoors, donned sunglasses to play.