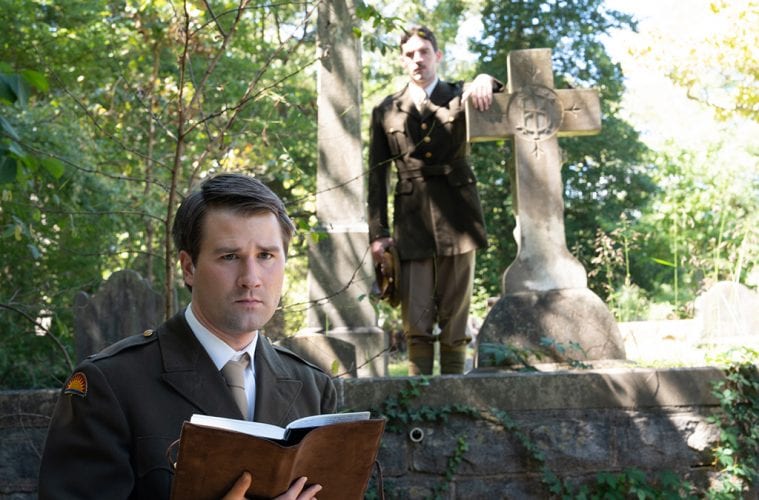 Review: “Not About Heroes” is a sweeping epic, but it’s not for everyone

All is not quiet on the Western front in Stephen MacDonald’s 1982 play Not About Heroes, a World War I drama currently getting a decent production at 7 Stages by Aris Theatre through November 18. The show delves into the troubled lives and changing relationship between famed war poets Siegfried Sassoon and Wilfred Owen.

There are only two actors in the show, and the set is minimal, but the play charts an epic journey — it’s a vast canvas tracing a long arc of change in both men. On first encounter, Owen (Chris Harding) is an adoring fan boy, an unpublished, provincial nobody, and Sassoon (Eric Lang) is a published poet, a cosmopolitan aristocrat and a war hero. By the end, both poets have more complicated views of their country, of the notion of heroism, of themselves and of their work, and Owen has become the unquestioned master.

Owen was killed in World War I, but Sassoon survived, and he here becomes the story’s narrator. The play is told as a series of flashbacks, mostly centering on the poets’ shared time as fellow patients at a war hospital near Edinburgh. Harding and Lang compellingly convey the initial almost unbridgeable distance between the two men — the differences in class, experience and reputation make friendship seem unlikely — but persistent warmth and curiosity, a shared interest in poetry and love of language become their bond. Director Frank Miller effectively traces that journey of transformation, understanding that quiet intimacy is actually this epic’s most distinguishing characteristic.

Blink and you’ll miss it, but the play does briefly, hintingly glance at the possibility that this deep literary admiration and poetic, platonic love between men may have been accompanied by earthier, romantic longing and erotic urges. The breath of a suggestion in the play is even less carnal than it sounds here, and although this is an area of abiding, perhaps prurient, contemporary interest, it’s one of the play’s least interesting threads (it’s also one of the play’s least visible threads). The play is not about heroes, but it’s also not about that either, which is fine; nonetheless, it’s worth noting for potential viewers who are curious about speculating on that particular aspect of the poets’ lives.

The venue for the play is not a perfect fit. 7 Stages’ blackbox space is arranged so the stage has a fittingly epic width and depth, but we the audience feel we’re inches from it, pressed up against the screen, so to speak. Set designer Harley Gould’s backdrop painting of a World War I battlefield is all well and good, but it’s too broad, panoramic and static for the long, intimate story of transformation being told.

Over the course of the play’s grand, sweeping running time, with otherwise spare and unfussy set elements, the painting ends up seeming both distracting and dull. Theaters always have to contend with sounds from the world outside, and longtime theatergoers learn to just ignore the occasional siren from beyond the theater’s walls. But 7 Stages contains two venues, and on opening weekend, screaming and a drum kit from a production on the mainstage were inevitably distracting, especially since Not About Heroes is a show full of quiet, contemplative moments.

In the end, there’s something very English and very 1980s about the play. Poetry, class distinctions and World War I all occupy more central places in the culture across the pond, and that’s certainly felt in transplanting the show. Curious viewers will be swept up by the story nonetheless, but giving a warning also seems fair: this is the sort of war drama in which the inscription of poetry collections plays a central role in more than one scene. The play’s time structure is far from inscrutable, but with flashbacks and various jumps in time and place, it is somewhat complex. There’s humor and drama, plenty of poetry and sympathy, but there’s not always pressing dramatic momentum in the play. It’s a fine production, but Not About Heroes is not for everyone.