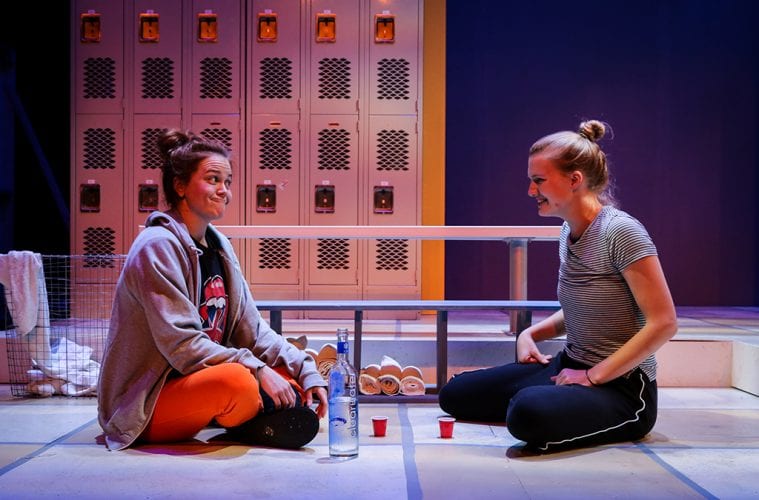 Dry land may sound like a safe place to be, but in Ruby Rae Spiegel’s 2014 play of that name, standing on dry land is far more fraught and perilous than immersion in water. Written while the playwright was still an undergraduate at Yale, Dry Land considers the dizzyingly careening emotional lives of teenage girls from an inventive vantage point: The play is set almost entirely in the girls’ locker room of a high school swimming team. The funny, intriguing and at times harrowing play is currently getting a strong regional premiere from the Atlanta Theatre Club at East Point’s Windmill Arts Center through November 18.

A number of characters wander in and out of that locker room, including a male janitor, but the bulk of the play focuses on the relationship between two very different members of the swim team: wide-eyed, anxious Ester (Samantha Binkerd) and the acerbic, more worldly Amy (Melissa McGrath). Amy is 13 weeks pregnant, and because other options are inaccessible (in Florida where they live, she’d need parental consent for a medical abortion), she’s trying desperately to induce a miscarriage. She lingers in the locker room long after practice with Ester, a shy and easily manipulated recent transfer student, doing shots of vodka, begging for blows to the stomach and weighing the options of drinking detergent or tossing herself down a flight of stairs.

The play employs an unusual, almost jolting original blend of tones, from the comic to the repellent, from the richly sympathetic to the icily observant and detached. In one memorable scene, Ester sits on Amy’s stomach, a grimly desperate act that inadvertently and suddenly induces a fit of innocent, girlish giggles. Spiegel is a keen observer of adolescence, the way in which emotions arrive in mixed battalions, so many and so varied they often can’t be distinguished one from the other. As a playwright, she wisely avoids any movie-of-the-week solemn preachiness, yet the play still touches on a broad menu of pressing issues in an impressively natural, unforced and convincing way. McGrath and Binkerd as actresses similarly avoid conveying simple, single emotions or easy resolutions. We’re never asked to take sides on the contentious issue of abortion; those sides are never actually even mentioned by the characters. 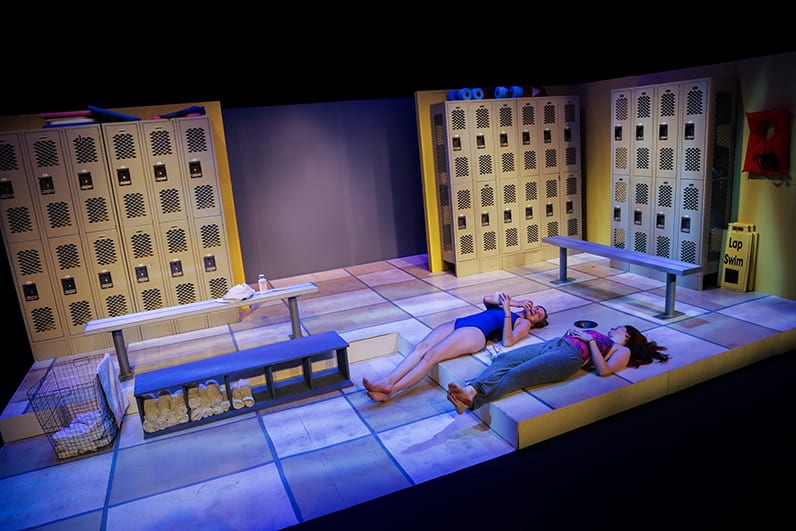 Director Rebeca Robles digs into the emotional peaks and valleys of teenage friendships in Dry Land.
(Photo by Casey Gardner)

There’s a time-sensitive crisis to solve — Amy’s pregnancy — but for all of that drama, a sort of lonesome, restless sense of stasis emerges at the play’s heart: There’s a braided sense of unbreakable, inescapable repetition in the play’s pattern of blackout scenes. When Amy is outrageously cruel to Ester at one point, we can see that it’s partly for revenge over the revelation of a secret, but there’s also a sense that it’s motivated by an urge to see what will happen, to see if anything new can happen. “She’ll get over it,” Amy says to a third party after Ester leaves the room in tears. And Ester more or less does.

Forgoing the huge dramatic arc, director Rebeca Robles zeroes in on the wildly shifting emotional microcosms of the girls’ interactions; the production is especially adept at capturing the way any encounter between adolescents can be, by turns, cruel, scary, comforting, funny, devastating. Buying a cookie from the vending machine can be an act filled with challenges, triumph, generosity and neurosis.

The play occasionally lacks the sense of energy, transparency of emotion and forward propulsion that many viewers crave, and I suspect some theatergoers will recoil from the truly excruciating brutality of the penultimate scene. Still, it’s an admirable play: Though not overtly political, it dramatizes the emotional landscape of confused, vulnerable and beleaguered female friendships that emerge in a particular political, social framework, a framework that is painfully recognizable as our own.