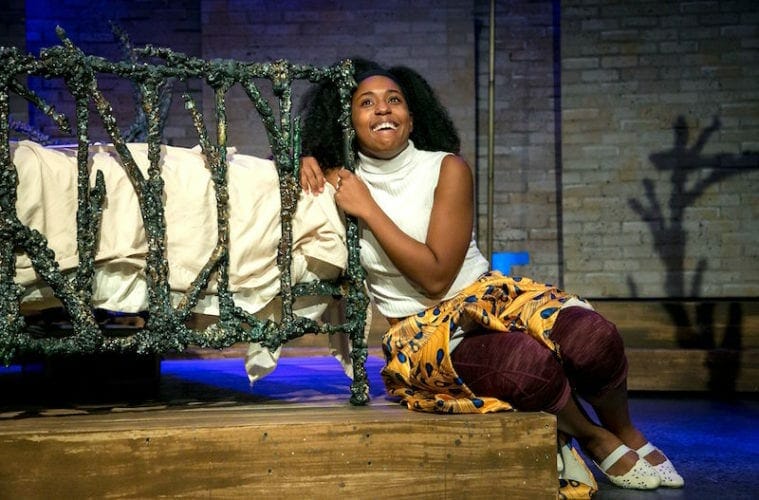 In-person performances for "RIP" have ended, but the Synchronicity Theatre staging is available online through November 1. (Photos by Casey Gardner Ford)

Review: “RIP,” by Danielle Deadwyler at Synchronicity Theatre, tears at its seams

It’s a funny thing walking into the theater for the first time in seven months. Entering Synchronicity Theatre to see RIP by Danielle Deadwyler felt like riding a bike or putting on a glove — with some minor changes.

Synchronicity is doing temperature checks at the door and walking patrons in one-by-one to choose seats, which are six feet apart. Otherwise, it was a normal night at the theater, no matter the smaller audience. On the set of RIP, designed by Gabrielle Stephenson, the audience sees a bed, a chair and outline of a mirror made to look like tacked together distressed tree branches. Actress Jasmine Thomas, who audiences might recognize from Synchronicity’s MAC | BETH and Horizon Theatre’s The Wolves, enters wearing a blue and gold West African printed skirt, a white tank top and sneakers. Her hair is curly and thick and she begins carving something with a knife. What becomes clear as the play progresses is that the woman whose story Thomas is telling, is carving herself.

Deadwyler’s RIP — a searing series of vignettes written by the formidable actor — is a reflection on Black girlhood and the never-complete journey to womanhood. At the start of the show, directed by Addae Moon, we hear those fun phrases from the “Little Sally Walker” nursery rhyme: “Put your hand on your hip and let your backbone slip.”

These girlhood playground games morph into scenes of sexual discovery. Thomas spends a great deal of time in the bed at center stage. And later, like in all phases of life, the woman must choose what to keep and what to shed.

RIP is part of Synchronicity’s 4×4 series — four solo shows by women of different ages and backgrounds. The other shows in the series — all available online through November 1 — include Backstage and Other Stories by Terry Burrell, Stiff by Sherry Jo Ward and Chorus of the Bears by Lucy Smith. It’s an ambitious project since all of the shows have in-person and virtual performances. “RIP” is on view online through November 8. The language of the play is its strength but also Thomas’ struggle. She gives a highly physical performance — we see the sweat on her brow — but the vignettes’ free-verse composition seems unfamiliar to her and a dialect coach would have been a worthwhile expense. The transitions are often muddy with a white noise that’s hard to discern the meaning of. There’s also a clear disconnect between the gravity of the material and Thomas’ performance that actor and director can’t seem to overcome.

In an interview, Deadwyler said that she wrote the play three years ago when she was getting her M.F.A. in creative writing and adapted it for this new world. RIP is a beautifully written show and much-needed in these times, but this staging doesn’t rise to the occasion of its magic.