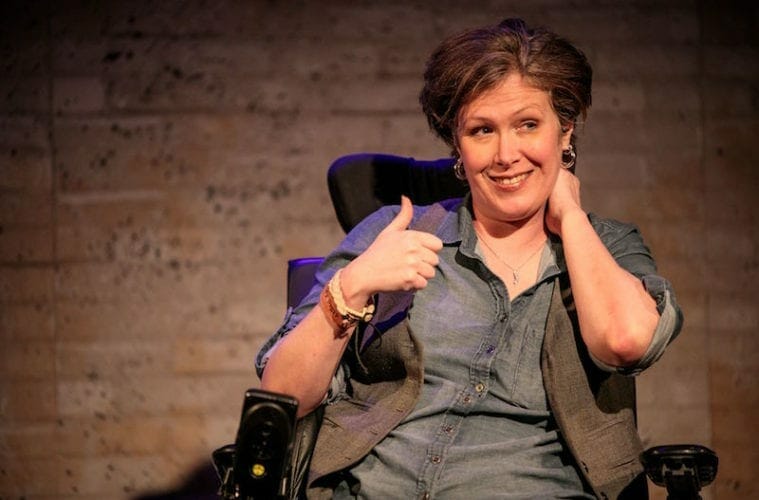 Review: “Stiff,” at Synchronicity, is anything but in deft hands of creator Sherry Jo Ward

Writer–actor Sherry Jo Ward’s Stiff, a poignant, hilarious, autobiographical tour de force, arrives at an appropriately challenging time. The solo show offers an entertaining distraction — with delights aplenty — and an effective foil for our Covid-19 crisis and national trauma in all its unpredictability, injustice and terror. The Synchronicity Theatre production, which had a four-night in-person run, is viewable via Vimeo through November 1.

In 2015, Ward was diagnosed with Stiff-Person syndrome, an extremely rare neurologic disease. It’s progressive and debilitating, impacting the trunk muscles and causing extreme rigidity, painful spasms, impaired mobility, and a heightened sensitivity to noise and stress. Can you name those objects and remember them? Sherry Jo Ward takes audiences through some of the neurological tests she’s taken.

Ward could have easily taken a strong, sobering magnifying-glass-look at her struggle. She has a knack for imagery that pulls you right into her experience — how her legs feel like  concrete, for example. Instead, she goes five steps further, giving us something touching, provocative and inspiring.

“I know what you’re thinking,” she begins, after entering in a mechanical wheelchair and taking her place onstage. She blows into a harmonica. “This is gonna be hilarious.”

In its all-knowing humor in the midst of darkness, Stiff has shades of Margaret Edson’s Pulitzer Prize-winning Wit, about a woman with advanced ovarian cancer. The two pieces share an irreverence and a sharpness that intertwines devastation and loss with genuine humor. Ward’s wry roasting of medical experts tasked with giving her answers also is reminiscent of Wit. She shows how their clinical assuredness often fails to recognize the simple need for connection with patients facing their own mortality.

Ward is a gifted actor and writer with a low tolerance for polite hogwash (“Pity gets a bad rap,” she laments at one point). Her distaste for how people try to run from discomfort is acutely observed, as well. She notes the reactions of those around her with brutal accuracy: how they agonize over asking what’s wrong with her, unaware that she can see their indecisive self-imposed anguish.

Themes of helplessness and loss are central to Ward’s narrative, performed entirely from her wheelchair on a platform on a strategically sparse set. She talks about how she misses wearing high heels, walking on the beach or going places like flea markets independently.

This might resonate especially right now as Covid-19 continues to steal our ability to do things we’d taken for granted. Sharing meals. Embracing friends with wild abandon. Seeing live performances. Theater, at least, is slowly trying to return.

To that end, Synchronicity offered its brief in-person run of Stiff, marking the company’s — and metro Atlanta’s — first live performances since mid-March. The endeavor, aided by protocols from the Emory University Nell Hodgson Woodruff School of Nursing, included temperature checks of every audience member, one-by-one escorted entry to socially distanced seats, mandatory masks, abundant hand sanitizer and capping the audience at 20 in a 138-seat space.

These procedures may have assisted the artistry in Stiff. In its in-the-flesh iteration, the show is a blaring reminder of why live theater is so immediate and affecting, especially when the performer can connect so immediately with an audience.

Ward manages to transport us across great distances even as she stays grounded in one spot. She fills the space with vivid characters from her life — mother-in-law Pat, husband Thomas, her physical therapist and a uniquely sketched cohort on the mobility bus she began riding as her disease worsened.

With luck, this will all translate successfully to video.

What may take your breath away is how Ward’s shrewd storytelling culminates with the realization that we never genuinely know what’s going on beneath the surface of someone’s skin. Facial expressions, social media profiles and vocabulary can all fail to reveal what’s inside.

In the end, Stiff is about empathy and honesty in the face of the unknown or unimaginable. There’s a beauty and strength in being able to sit with someone and say that you, too, don’t know.

In times like these, when we are separated by necessity, ArtsATL is needed more than ever. Please consider a donation so we can continue to highlight Atlanta’s creative community